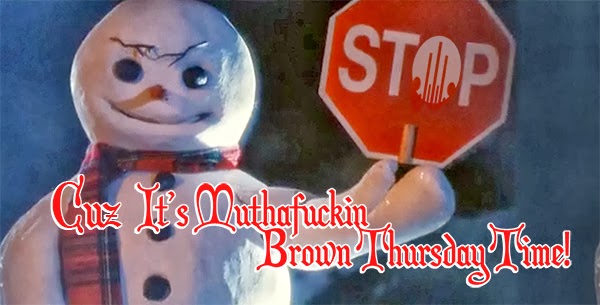 OUR ANNUAL "BROWN THURSDAY" IS ALMOST HERE AND IT'S SPREADING THROUGH OUR ENTIRE ONLINE STORE LIKE A REALLY NICE FUN GENEROUS DISEASE!

The most important part of the disease, I mean the announcement, is this:
We are giving away MORE FREE PRINTS THAN EVER BEFORE! So listen closely to the sound of your voice as you read along with the following information.
Our Brown Thursday Sale officially starts the night of Wednesday, Nov 27 at midnight eastern time (9PM pacific) and goes through Dec 8th or until supplies last.

Spend $25 or more (before shipping) on any combination of items on ZEROFRIENDS.COM and receive your choice of ONE of these two signed, numbered limited edition 8"x10" prints from ALEX PARDEE and DAVE CORREIA.

Choose from "The Pilgrim of Death" By Alex Pardee (Limited edition of 400) or "TurKid" by Dave Correia (Limited Edition of 400).
Please note in the comments section upon checkout which of the two prints you would like (if no print is specified we will send you one of the two at random). Offer good until ALL Prints are gone. Limit ONE per household while supplies last. 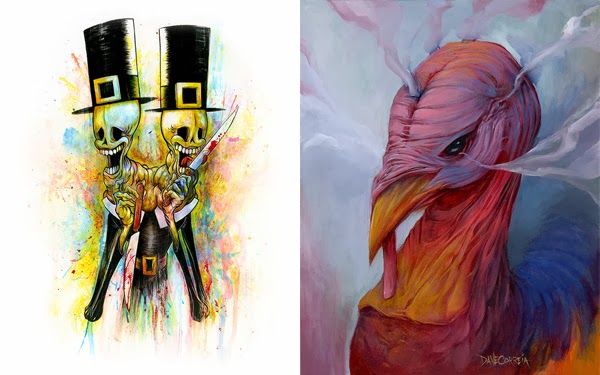 But that's only PART of the good part!
Spend $50 (before shipping) and get BOTH of these 8"x10" prints for FREE! Limit ONE EACH per household while supplies last.

No need to add these prints to your shopping cart, we will automatically ship them to every qualifying order.

But OH MY GOD! That's STILL not the best part!
Spend $150 and get one of these super-limited signed 8"x20" "Trail Of The Pilgrim" print by Alex Pardee (edition of 100). Offer good until ALL Prints are gone. Limit ONE per household while supplies last.

And an even BETTER part of this whole deal is that you don't have to wait until someone let's you in from the cold to fistfight someone to get deals! You can do it from the safety of on-your-butt starting on the night of Nov 27th at midnight (eastern, 9PM pacific)!

That's right, an entire day before some of you hoarders line up at Best Buy to get a 3-D TV you'll never watch and a Hunger Games Blu Ray for 4 dollars, you can ON-LINE UP at Zerofriends.com and check out, alongside BRAND NEW PRODUCTS, the new (temporary) slashed prices on a few Different Signed Limited Giclee Prints, all of our 8" x 10" prints and 5" x 7" prints are on sale, as well all of our t-shirts!
Sale officially starts MIDNIGHT EASTERN TIME (9PM Pacific) on Weds night (Nov 27)

Step by step instructions without illustrations:

1. Go to ZEROFRIENDS.COM, where, at the time of the sale, we will be putting up brand new t-shirts, new girls' shirts, new prints, restocking our hoodies, and more! (you can see previews below!)

4. Starting On Brown Thursday (technically Wrad Wednesday night), Nov 28, (Officially starts midnight Wednesday night at midnight Eastern Standard Time) Purchase ANY combination of items equalling $25 or more before shipping and receive, along with your order, your choice of ONE of two free 8" x 10" signed & numbered print of Alex Pardee's "Pilgrim of Death" (limited edition of 400) or Dave Correia's "TurKid" (limited edition of 400)*
Spend $50 or more before shipping and receive BOTH of the free prints!

4.5. Purchase ANY combination of items equalling $150 or more and receive, in addition to the two free 8" x 10"s, a FREE 8" x 20" signed and numbered print of Alex Pardee's "Trail of the Pilgrim" Painting, totaling 3 free prints.

*Limit of ONE free print of each print per HOUSEHOLD. While supplies last.

Happy Thanksgiving, and thank you from all of us here at ZEROFRIENDS.
See you invisibly there!

(below are just previews. some old, some new. not everything is available just yet, but even on the products that are, if you want to get a free print you should probably wait or something! Good advice!) 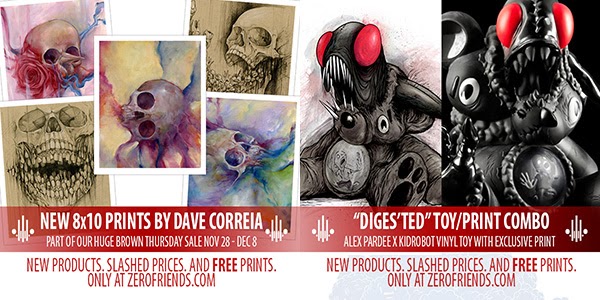 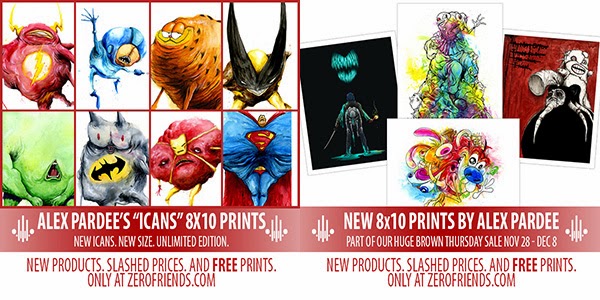 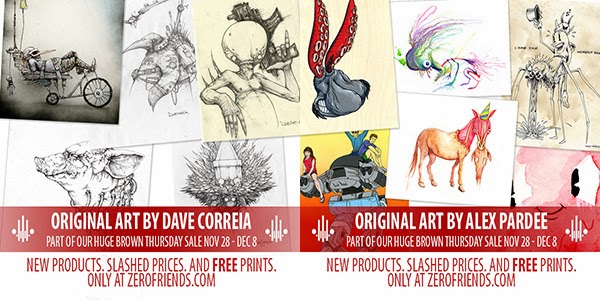 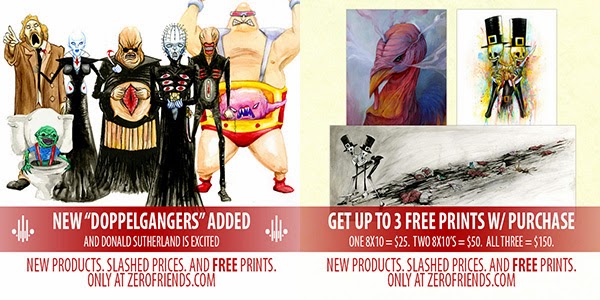 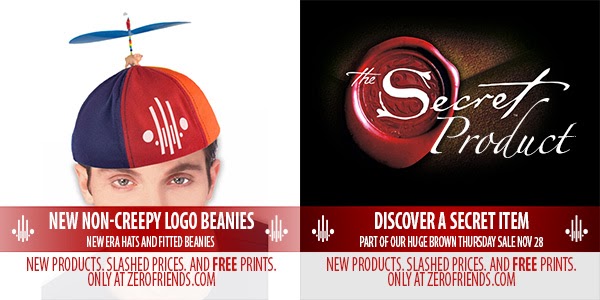 Regurgitated by alexpardee at 1:02 PM

Regurgitated by alexpardee at 12:43 PM 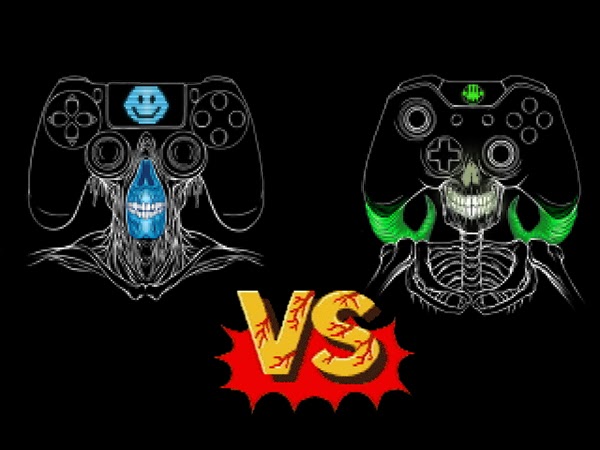 In the late 80's, the Sega Genesis promised to do what "NindenDIDN't", and then fizzled into the ether after a decade-long battle, momentarily calming the vast Pixel Sea that Nintendo had claimed. Soon after, Sony emerged with a confident threat that "we weren't ready", and they were right. While Nintendo continued to make children happy with mustachioed men, ocarinas and silly cart racing, Sony's Playstation kept the adult consumers' soup warm and tasty until one day Microsoft decided to enter the ring and shit in everyone's soup bowls. 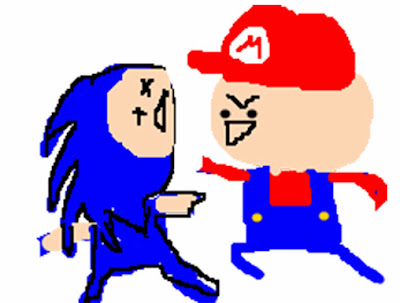 Then, it was back and forth, and back and forth until everyone seemed to be on the same playing field, playing the same games, holding hands online, no longer alienating their friends for only having "the shitty old first generation Xbox360" or for choosing to play GTA 5 on PS3 because those controls make it easier to cheat. All was calm, even if everyone online just rage-quits or tells each other to fuck themselves and eat bags of dicks for unfair level boosting, then laughs about it in the morning.
However, starting today, November 15, 2013, THE GREAT CONSOLE WARS have begun again.
First up to strike is the new-favored Playstation 4, unleashing its early offense until next week when XBOX-One tries heartily to take back it's crown that it once had in the early 360 days. Then, only time will tell who is prettier, who can punch harder, and who has a better strategy for taking all of our money. 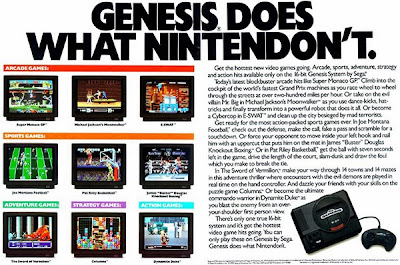 And even before either of these titans goes head to head over this holiday season, everyone already has a favorite.

So to commemorate these favorites and these brave soldiers who are about to jump headfirst into battle, with only your feeble hands controlling their fates, we would like to ask you to "pick a favorite", and get that favorite for FREE with any purchase of $10 on Zerofriends.com. Can't pick a favorite? Need to represent both sides of the battle? No problem, just spend $20 and get BOTH of these console warriors to stand by your side while you dish out head shots and patiently wait for the next Uncharted or Gears of War. When the smoke clears next year, we'll see which warrior fought harder, and which system emerges victorious, but remember, whoever wins, we lose (time, money and social lives). 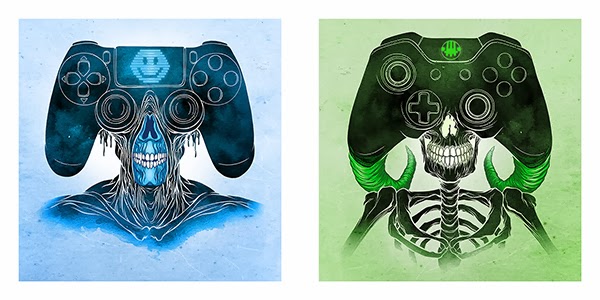 Here's how to receive your FREE "Console Warriors" print:

1. Go to our brand new, revamped "ZEROFRIENDS" online store at http://www.zerofriends.com
2. Spend a total (before shipping) of $10 or more on ANYTHING in the store.
3. Upon check-out, type in the "comments" section which Console Warrior you would like (XBOX or PLAYSTATION).
4. Complete your checkout. No can't, and don't have to add the free print to your shopping cart, it will be automatically shipped to you with your order as long as your order was placed between NOW (Friday, Nov 15th) and Nov 22 as was over $10 before shipping). Any order over $20 will automatically get BOTH "Console Warrior" prints for FREE.

*NOTE: If you do not note which print you would like we will automatically send you one of our choice.


**NOTE: Limit ONE EACH of the prints per oder (Limit total of 2 different prints). 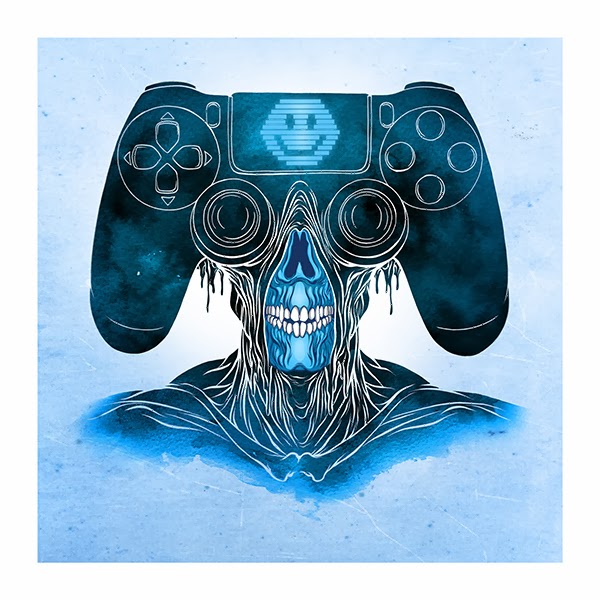 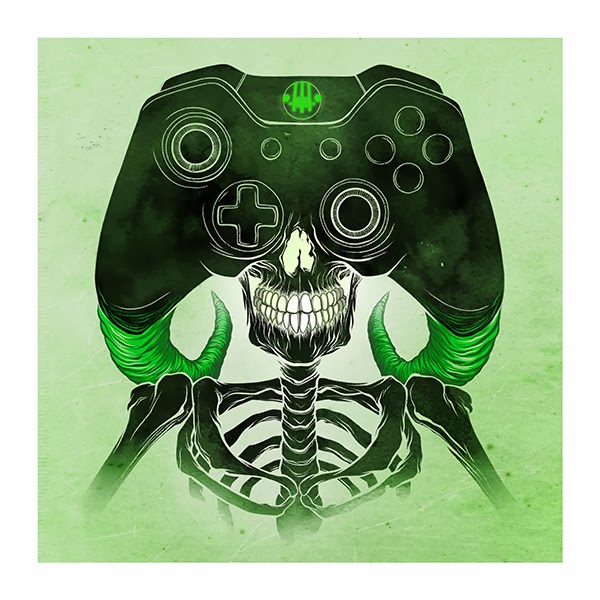 Regurgitated by alexpardee at 8:30 PM

What’s it like to be male and pregnant with a repeating monstrous baby in your head? If you’re Anthony, you know exactly what it’s like. “Anthony’s Pregnancy”, my new limited print release is AVAILABLE NOW ON Zerofriends , as part of my ongoing “Vertigo” series. 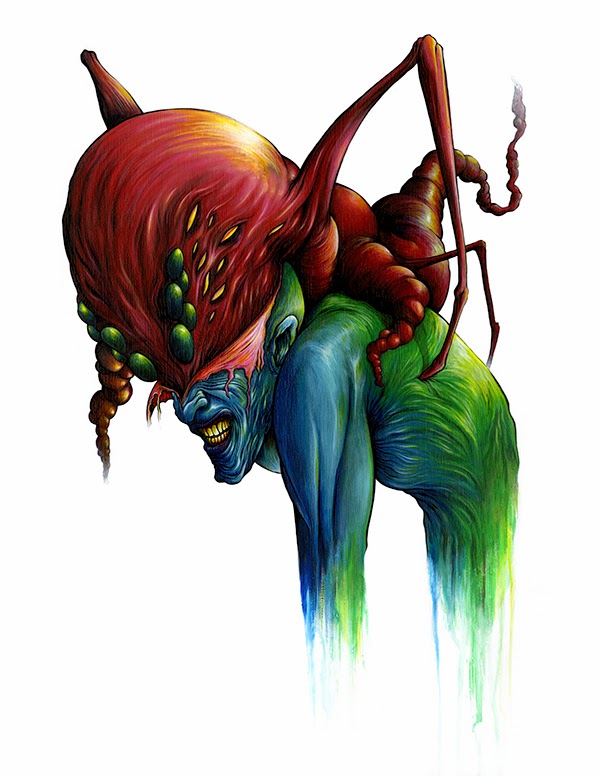 "The Pregnancy"
By Alex Pardee
16 x 20
Limited Edition of 100
$60.00 Each
Comes shipped with a free 8x10 story of "The Pregnancy" as part of my ongoing "Vertigo" series of prints and stories revolved around famed nightmare hunter Verti Parker.

Also, my "BUNNYWITH" show is coming to a close this week at Gallery 1988:East and to celebrate a successful month, I'm going back to LA and hanging out at the gallery tomorrow, Friday, from 4-6 in case you wanted to come get anything signed or just wanted to laugh at my new "one-sideburn" look.
Oh, but that's not all, because I will be at the gallery doing a Shining, i mean a signing, I will also be releasing one new Bunnywith print that will ONLY be available tomorrow from 4-6. 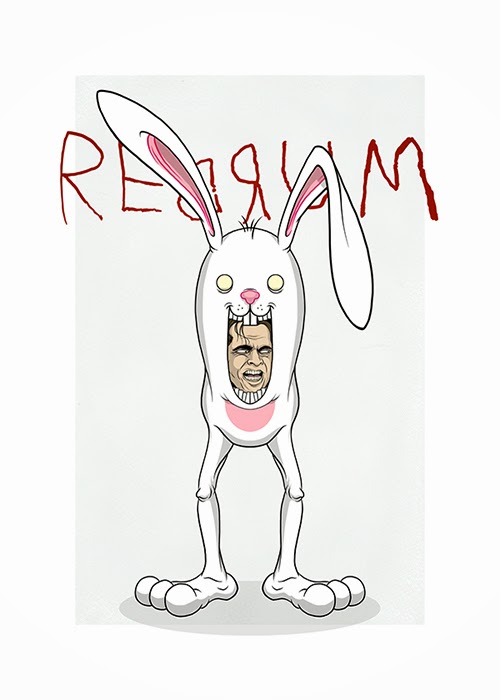 Regurgitated by alexpardee at 8:23 PM