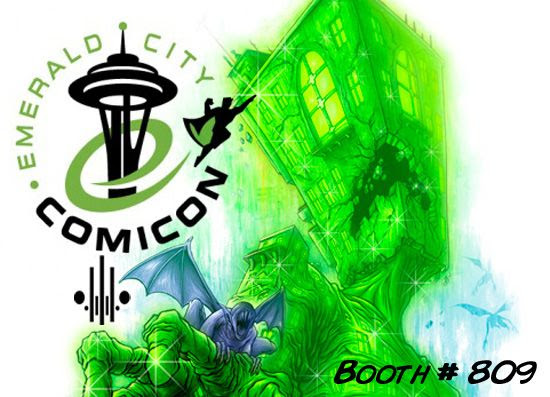 Alright, we are off to Seattle to see the Wizard, or at least expose who the man is behind the curtain that's been emailing us close-up photos of street-vomit for 2 weeks straight is.

Yep, Zerofriends is setting up shop at the EMERALD CITY COMIC CON this weekend where we will be releasing new stuff (Including a rad Emerald City EXCLUSIVE limited print) and signing and sketching on flat pieces of slaughtered trees to people who wait single file in a line at a certain time. Sound good? GOOD! There are a ton of other guests at this con who I can't wait to try to stalk, so if you are in the area, you should go nerd-out here with us.
Zerofriends will be hanging there with ME (see signing schedule below), DAVE CORREIA (who will also be releasing a couple new prints, see below), Chloe Rice and a couple of other (zero)friends who will be floating around with us . So say whats up. Or DON'T!  It's your funeral...

Here's all of the info and scheduling.
ZEROFRIENDS BOOTH #809 (by a gigantic wall of superhero t-shirts that are by no means fit for actual superheroes. you know...cuz they are t-shirts. that are pretending.) 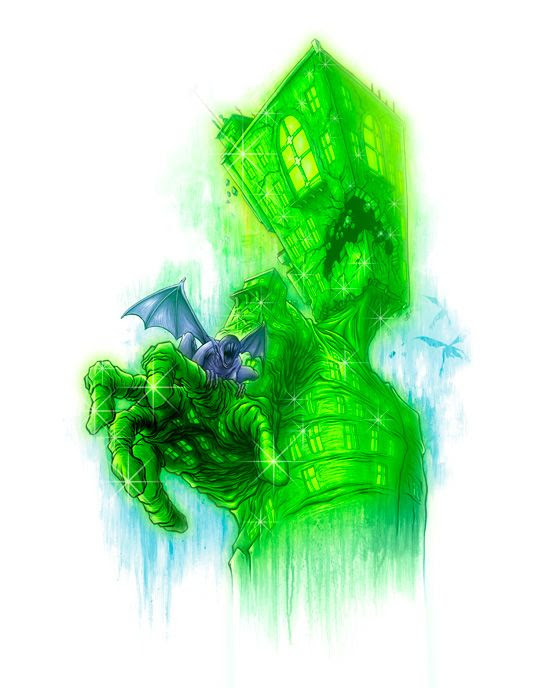 "Breathing Architecture: The Emerald City Variant"
By Alex Pardee
16" x 20"
Extremely limited edition of 30. Signed and numbered in angelic emerald blood by Alex (me) Pardee. $50 each. 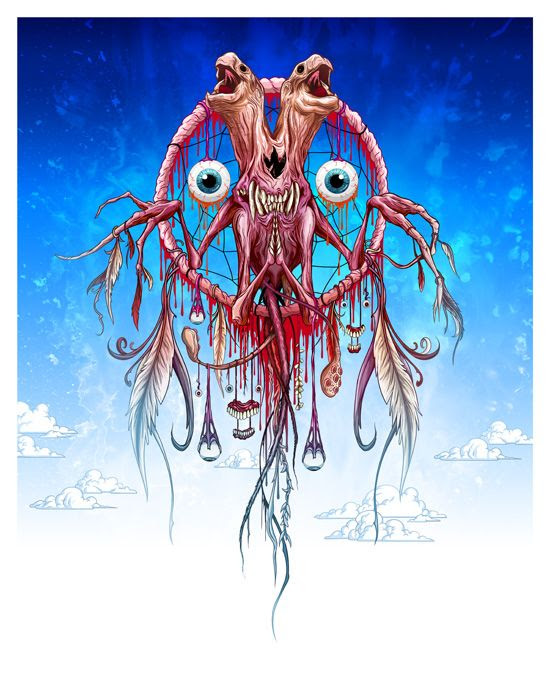 And March 1st, which is the first day of the con, this little demonic print gets released both in person and online.
"The Dream Gobbler" Limited Edition.

And I have a handful of more brand new limited (and non-limited) prints getting released at the con as well. Here's a selection of them: 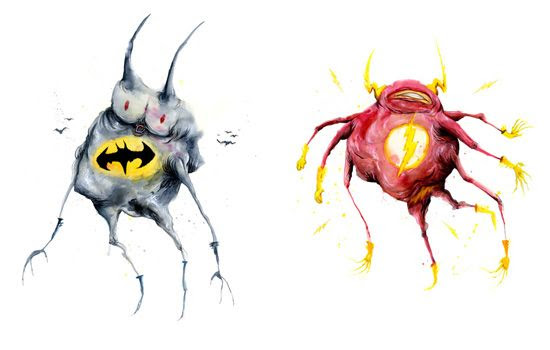 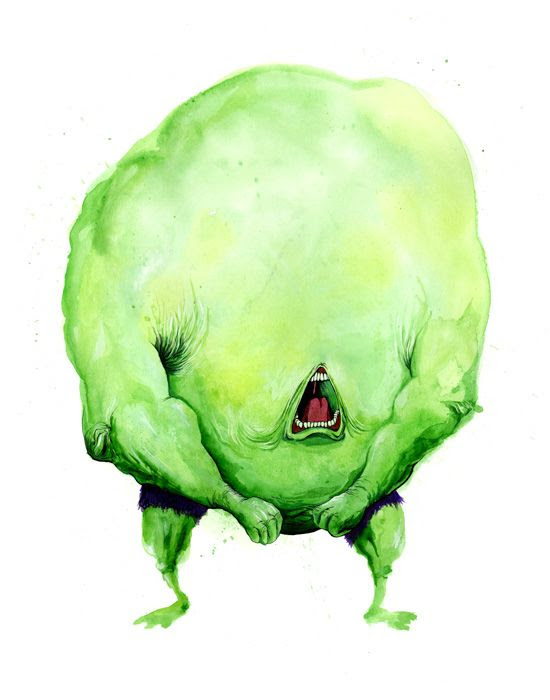 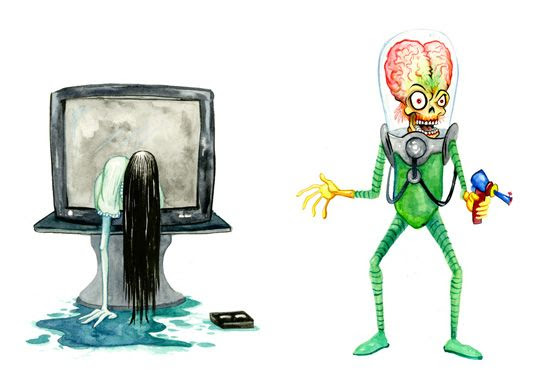 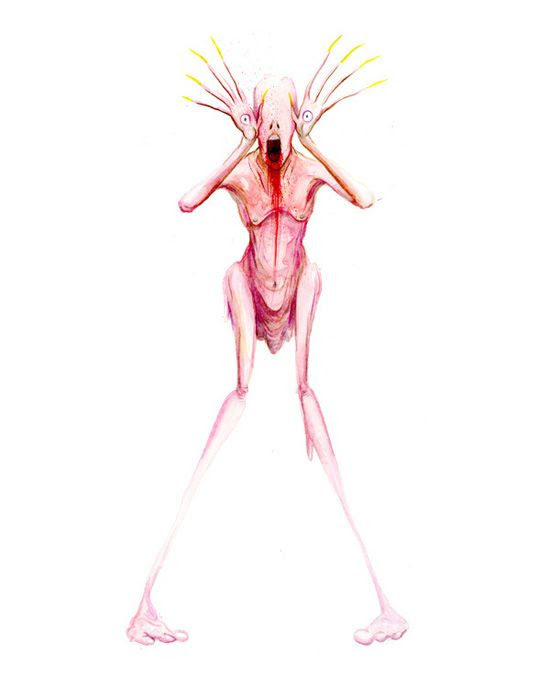 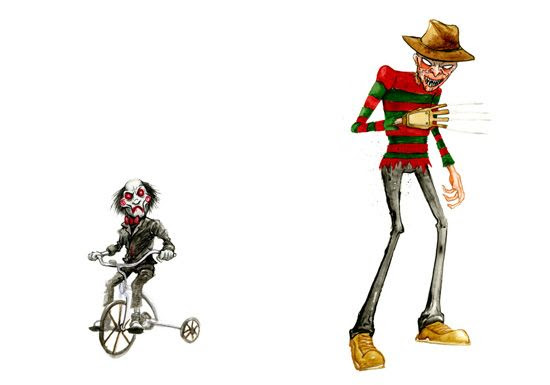 And the silly DAVE CORREIA will also be unleashing some amazing new limited prints as well. Here's a taste of his....prints. 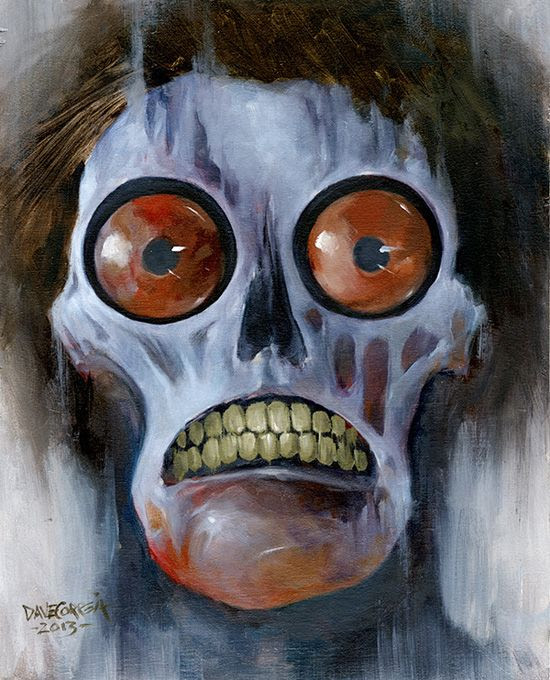 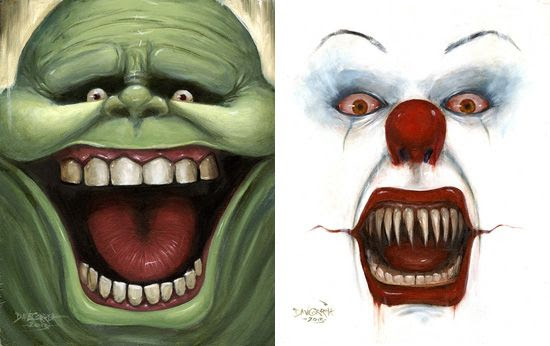 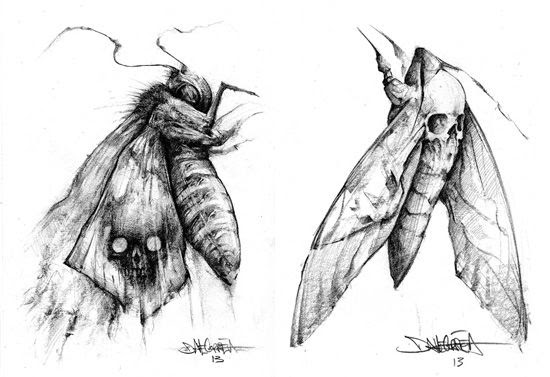 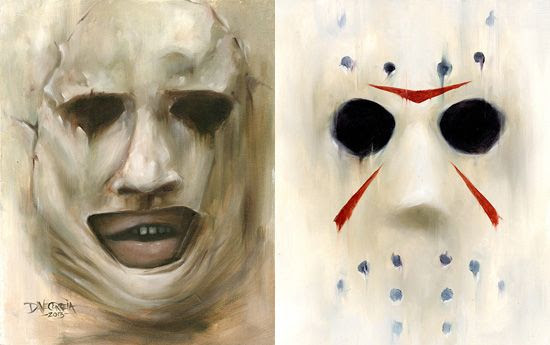 All of these prints (with the exception of the Emerald City exclusive) will be available online after the convention. See you weirdos there!!!!!
GRUNGY!
BOOTH #809!
Regurgitated by alexpardee at 9:14 PM

You don't have to be good at something to love doing it. Case in point: me and pinball. Hell, I wasn't even good at the tiny Astro Pinball game that I got from King Norman's.

However, I used to wonder why I was fairly good at home video games when I was younger but a complete failure when it came to pinball skill. But then recently it occurred to me that I was never actually GOOD at video games, but rather I was good at being repetitive and patient until eventually I beat a game that seemed to be fucking impossible at first. And since I never had access to a pinball machine at home, and I chose to spend my quarters sparingly on arcade games that I knew I would last longer than 4 seconds on, I never "got good" at pinball. Unless of course "got good" meant shoot the ball perfectly in the 2 inch space between flippers without having it touch any bumpers on the way down. If that were the case, I'd be the Billy Mitchell of pinball. But nonetheless I was always mesmerized by the pinball machines in the local arcades. Pinball machines almost seemed illegal when I was younger. The flashing lights shouted "CASINO". Each machine was surrounded by at least 3 guys in bandanas. Cigarette ash fell to the floor as a lit cigarette lay on the edge of it while its owner was planted in a weird sex-stance and an angry face. And the incredible artwork on the machines featured pin-up girls, aliens abducting puppies, cops shooting people in the face, haunted houses, and even ROBOCOP.

So I just sat there from a few feet away like a little creep-kid and just stared. At the art, at the players, and at all of the little embellishments that made each machine unique. Some of my favorites that I can remember are the launch button on the Tales From the Crypt machine...
And the severed FREDDY KREUGER head. on the Nightmare machine.
There's a great documentary on Netflix and Hulu called SPECIAL WHEN LIT that will make you fall in love with pinball if you never got a chance to years ago.

Flash forward a billion years and almost all of those amazing arcades are gone, and very few arcade games are getting produced, and even LESS pinball machines.
But there's an amazing team that is attempting to bring a little of that nostalgia back via this new Kickstarter project that I am extremely proud to be a part of.

TILT WARNING CUSTOMS has teamed up with myself as well as other artists (JEREMY FISH, FRANK KOZIK, COOP & SAM FLORES) to completely restore, revamp, and create custom pinball machines from scratch to fill an arcade full of one-of-a-kind-art pinball machines. Here is a little video introducing the amazing project.

Find out more about the project and how to pledge here at the BRING BACK THE ARCADE Kickstarter page.
Regurgitated by alexpardee at 9:43 AM 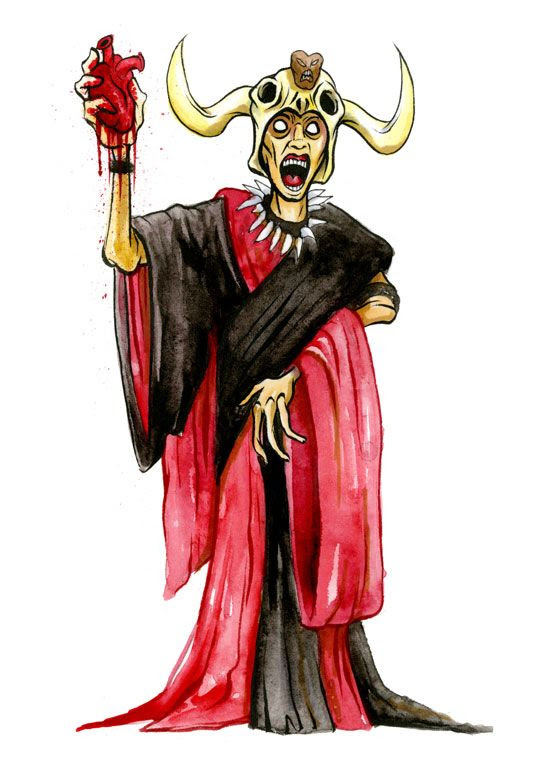 Valentine's season is a season of love-filled sacrifices. It's a time where we can give each other a piece of our hearts as a token of thanks to those that we love. In this particular case, we here at Zerofriends love YOU. So we are sacrificing 100 hearts limited prints as a token of our love for you during this season of loving and giving.
Starting now, and ending either when the prints run out, or when Valentine's Day ends, any online order of $10 or more (before tax and shipping) made on the ZEROFRIENDS ONLINE STORE will automatically receive a FREE 5"x7" "Mola Ram" Limited Edition signed and numbered print designed by ME (alex) as part of my Doppelgangers print series. It's that simple. No need to add anything to the cart or anything. As long as you see the banner on the front page of the store, you WILL receive your free print with purchase.
HAPPY VALENTINE'S DAY! 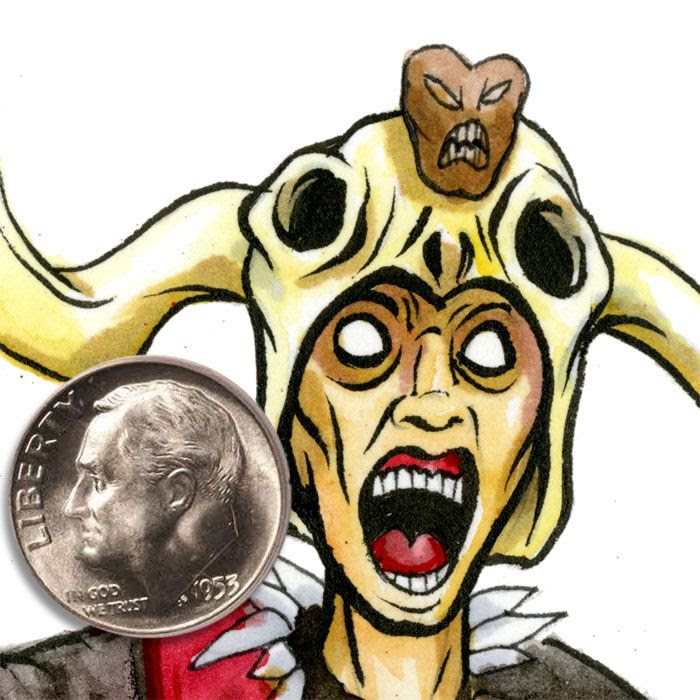 Regurgitated by alexpardee at 2:33 PM

Being friends with Lisa Frank had it's perks back in the 80's. I got let into all of the awesome Trapper-Keeper trading parties. I got front row seats to the glitter parades. I got to paint technicolor spots on blank damatian puppies. I got to ride TWO dolphins into the sunset. And most of all, I had an unlimited amount of cool stickers. Well, after Lisa Frank dyed, i mean DIED, back in a terrible rainbow accident in the late 90's, I've been completely without stickers. It's been pretty traumatizing. That is, until my good friends over at STICKER ROBOT started showering me in what's been missing in my sticker-less life! After I got some die cut stickers from them I actually had enough stickers to take a shower in. It felt great.
We have so many stickers now that, starting today, any order placed online at my webstore ZEROFRIENDS.COM will receive a handful of Zerofriends silkscreen die cut stickers courtesy of Sticker Robot and Lisa Frank's death! Offer only lasts during Lisa Frank's death, or until we run out of stickers. So now's the time to buy some of the marked-down shirts or prints we have because then not only do you get a deal, but you get a STICKY deal on top of a deal! DEALS ON DEALS! Meals on wheels! We love you! 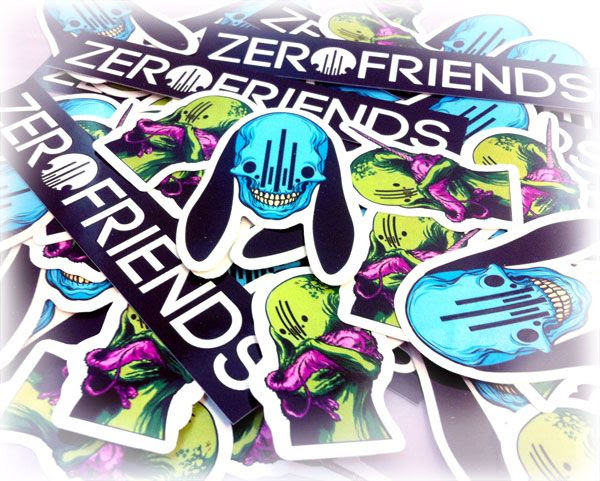 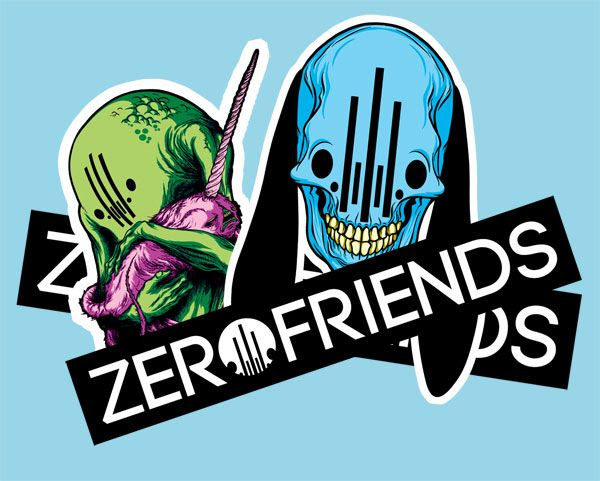 Regurgitated by alexpardee at 5:13 PM

In conjunction with Brett Amory's "ANONYMOUS" solo show that is currently on display at our Zerofriends Oakland Gallery, we are offering 7 brand new, open edition signed 8"x10" prints of some of Brett's passport portraits (passportraits?) from his show.
However, these prints will ONLY BE AVAILABLE TO PURCHASE THROUGH SATURDAY, FEB 9th.
CLICK HERE TO VIEW OR PURCHASE BRETT'S LIMITED PRINTS.
(each print also comes with a corresponding "passport" print from which the painting was inspired by)

Regurgitated by alexpardee at 11:20 AM