Where have I been and where am I going??

Its been a while since i stuffed my fat toes into my limited edition cyberspace shoes and gone web-surfing in the intergalactic ocean that is the internet. Although its only been a few days, somehow I have now developed a fear of it. An overwhelming fear that I can't pick up where I left off. Too many Twitters to catch up on, can't possibly respond to the insane amount of spam on myspace and facebook, and failblog scares me only because i will sit there for hours and stare at utter fail only to make myself feel better about only semi-failing.

However, fear isnt the only thing that has kept me away from Sandra Bullock's best movie (don't question it, of COURSE i mean "The Net" and i dare you to challenge me). In usual fashion, I have been juggling more projects than ever and neglecting my health and sanity to make sure they will rule the school. So with that all being said, here is some fun little info on what is going on with me in the next week or so:

1. A huge chunk of my internet-neglecting hours have actually been spent drooling over perfect actress Kristen Bell, who I have become so obsessed with that i actually sold the rights to my dreams and someone made some shitty movie about Beyonce and Ali Larter and didn't even include my heavenly love, Kristen. If any of you know her, please tell her I would love to take her to Toast, which is my new favorite restaurant. I will wear clean pants maybe. 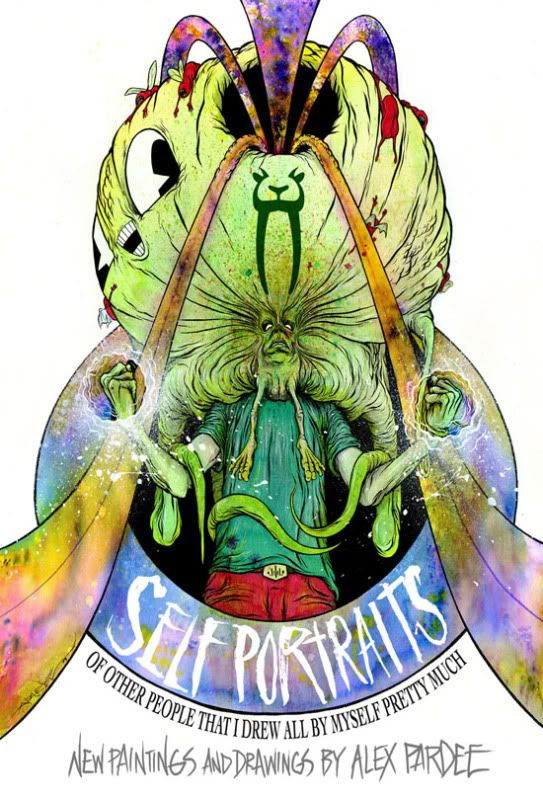 Finally, I am returning to PORTLAND, OREGON next week to install and show a brand new collection of artwork at the Upper Playground / 5024PDX Gallery! Last time when I did my show there, I thought it would be a cool experiment to not sleep at all and paint 30 paintings in 30 days. Well, that experiment killed me and I vowed NEVER to do that again. So instead i said fuck that, i can do the whole show in 3 WEEKS! So yah, I have been in and out of a haze, day in and day out pumping out new paintings and drawings for this new show which will be opening next Thursday, June 4. Here is all the info about the show, as well as a little behind the scenes collage of me making stuffs for the show. Hope to see you there!!!! I love Portland. Maybe Kristen Bell will show up.

My quote about the show, which is subtly titled "SELF PORTRAITS OF OTHER PEOPLE THAT I DREW ALL BY MYSELF PRETTY MUCH":
"Throughout the years, my reality and my imagination have occasionally blurred, causing me to misinterpret memories of various characters that I have met in my life: The grocery bagger with braces who constantly coughed on my apples; the old woman who had a heart attack in front of me at the bank; and the overweight man with arms growing from his head who yells at me for taking his parking space at work. Some are real, and some...I only THINK are real. Nonetheless, I wanted to create portraits, stories, and emotional representations of some of my favorite characters that continue to wander
through both my imagination and my reality.” 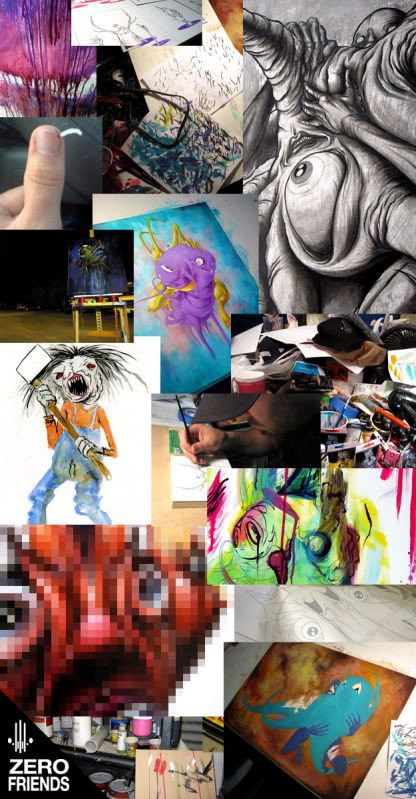 3. MY VERY FIRST ORIGINAL VINYL TOY IS BEING RELEASED THIS SATURDAY, MAY 30th @ UPPER PLAYGROUND IN SAN FRANCISCO!!! I am really excited (and a bit nervous) about the launch of this toy. I have wanted to fully design a vinyl toy for years and I can't thank Upper Playground enough for giving me this chance! I love the toy and I hope you do too. Here is the info about this Saturday's limited release and signing. Oh, yah, just to clarify, there are 2 versions of the toy. One is an Upper Playground Exclusive (BLACK & GREEN) and THAT is the one being released this Saturday. The REGULAR EDITION (Teal & Magenta) will be released in 2 weeks in LA @ MunkeyKing and then everywhere else shortly after that. Also I dont know how clear it is here but if you want to just come down and say hi or have me sign something, that would be awesome. you dont have to buy the toy just to say hi!!!! Check the info: 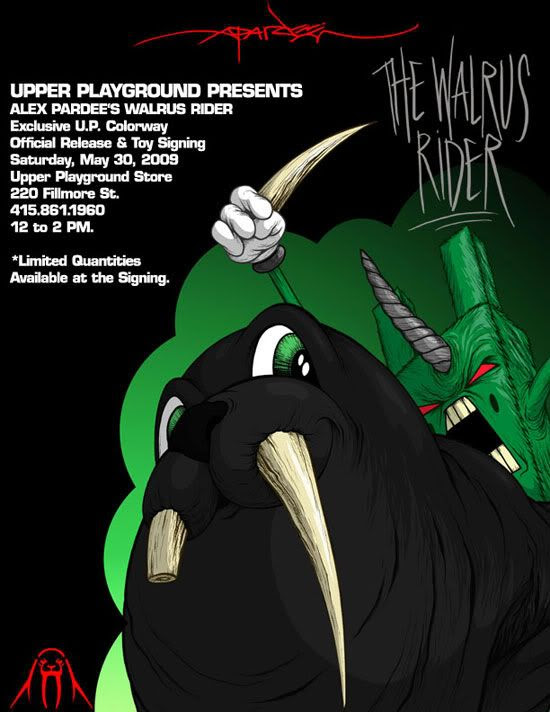 HERE IS A SHOT OF THE U.P. EXCLUSIVE VERSION THAT IS BEING RELEASED ON SATURDAY: 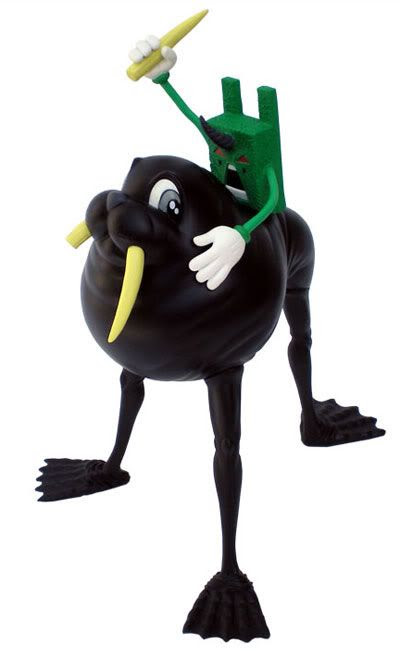 And look how awesome it looks in the giant box!!! 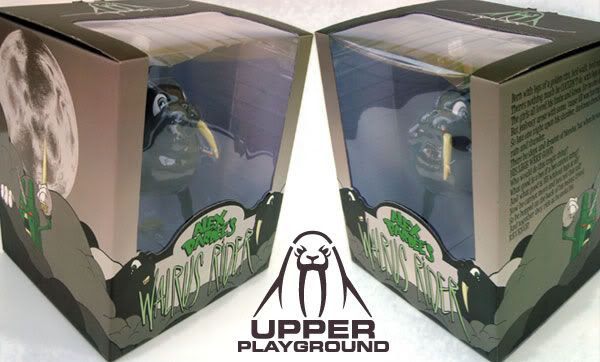 Maybe you have even seen these around, as apparently the rider has been missing;) 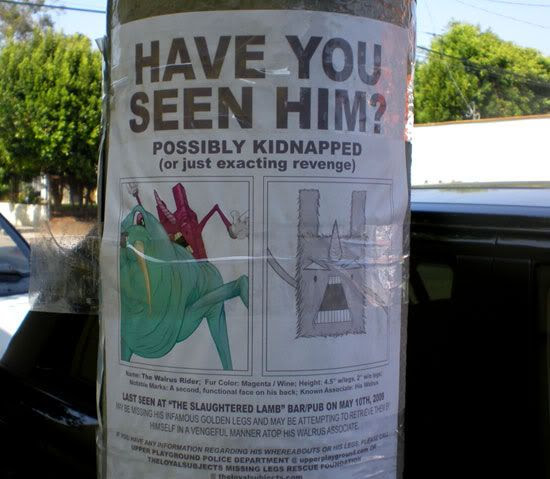 And here is a sneak peek at the REGULAR EDITION in the package, that will be released in 2 weeks! 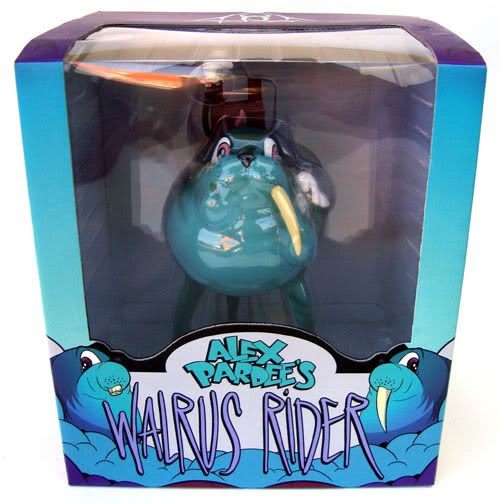 NOTE: There will be LIMITED QUANTITIES to sell on hand at the release, i have no idea how many, but also, you can PRE-ORDER them to assure you get one!
PRE-ORDER THE BLACK EXCLUSIVE HERE!

4. Way more updates soon, as we are putting the finishing touches on CHADAM and ZEROFRIENDS is getting ready to release a ton of NEW STUFF!!!

5. LASTLY (for now), I got a very very cool and unexpected visit from my friends, Aesop Rock & Jeremy Fish to provide me with some well needed inspiration in this crunchy time of no sleep and exhaustion. Here's a little video that Aesop made while he was here (including that sick beat that is in the vid), which actually shows you a little glimpse of some of the new pieces that are debuting at my PORTLAND "Self Portraits" show. Enjoy;)


Regurgitated by alexpardee at 2:24 AM

The Best Book Ive Ever Made Is Finally Back!

LOOK AT WHAT'S FINALLY BACK IN STOCK AND READY FOR SOME MESSY WATERCOLORED BEAUTIFUL LOVE FROM YOU ALL!!!!
If you don't know what this is, please continue reading. If you DO, what are you waiting for? Now that they have discovered the missing link and shit, this book is the ONLY thing waiting to be uncovered by your inquisitive eyes. 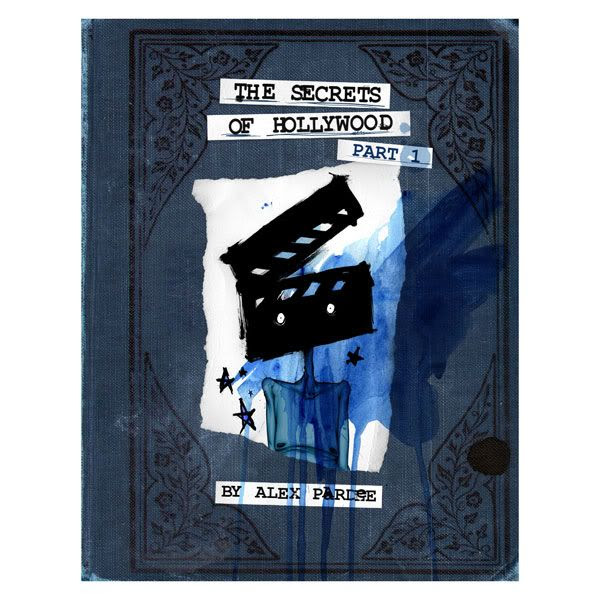 
Here is some more info about the book and about my revolutionary creative process:

"A lot of people don't know that one of my 2 main hobbies are A) trying to do things blindfolded, and B) detective work, aka just pretty much spying on people. Over the years, because of certain projects that I have been lucky enough to be a part of, I have also gained access to certain peoples' lives, which is always an awesome chance to take part in my spying hobby.

For example, Did you know Avril Lavigne speaks FLUENT DOLPHIN??! Its incredible!

After spying on almost every celebrity in Hollywood, I had stockpiled a ton of actual secrets that I have learned about some of them. Some secrets are astonishing, others are just AWESOME. I then decided that i no longer wanted them to be secrets anymore, and I wanted to share them with all of you. But then I thought, "how could I possibly do this in a non-boring way??? Oh, I know, I will practice my OTHER hobby, and PAINT BLINDFOLDED while simultanously integrating all of these TRUE FACTS into my paintings, and then compile them into a set of books for you to enjoy." 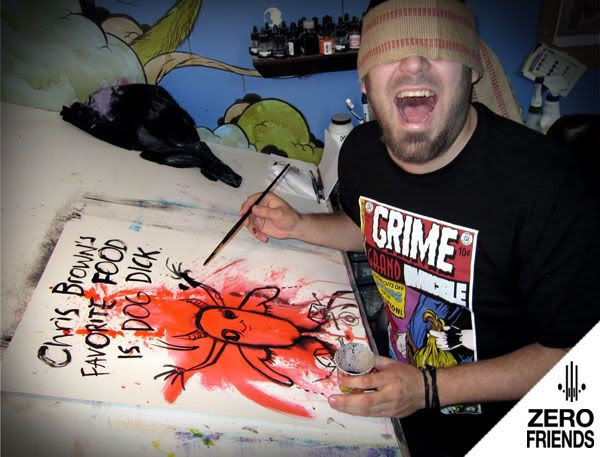 And thus, "The Secrets Of Hollywood, Part 1" was born.
This is the first in a series of 3 books, which, when combined together, will be over 120 pages of amazing and SECRET secrets that some of your favorite celebrities don't want you to know.

Here are some pics of the book, and as an added bonus, the FIRST 100 ONLINE ORDERS WILL RECEIVE A FREE GICLEE PRINT OF A BRAND NEW SECRET! (HINT: ITS THIS CHRIS BROWN ONE RIGHT HERE:) 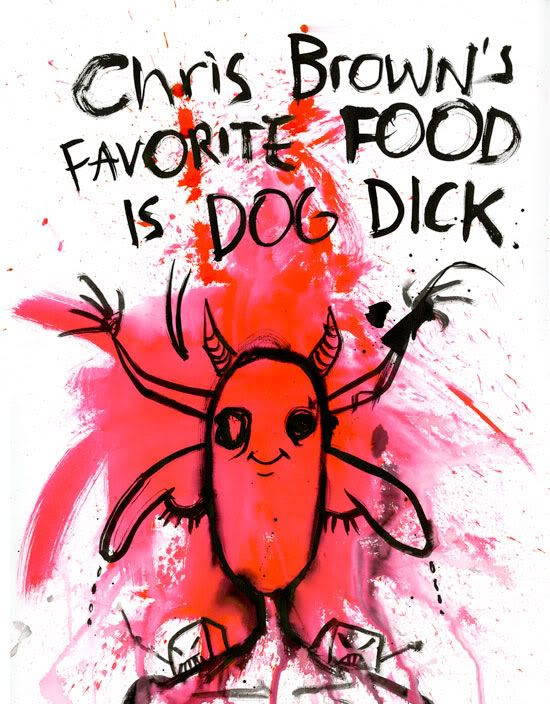 Note: "The Secrets of Hollywood" was originally compiled and published in 2004 in a smaller format, but sold out quickly and has not been available anywhere in 5 years. However, this new version, though containing the same artwork, is re-laid out with larger panels, and broken up into 3 separate books in order to present the artwork the way Alex originally intended it. This is book #1.

Additional pics of the book, which you can purchase by clicking any of the pics on this page. 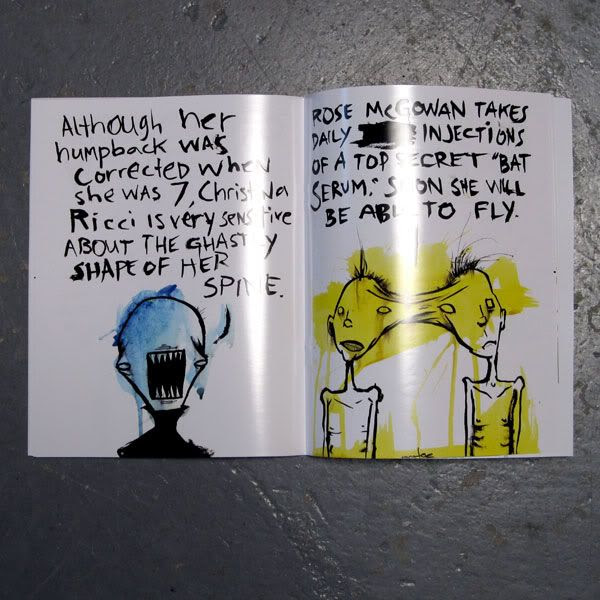 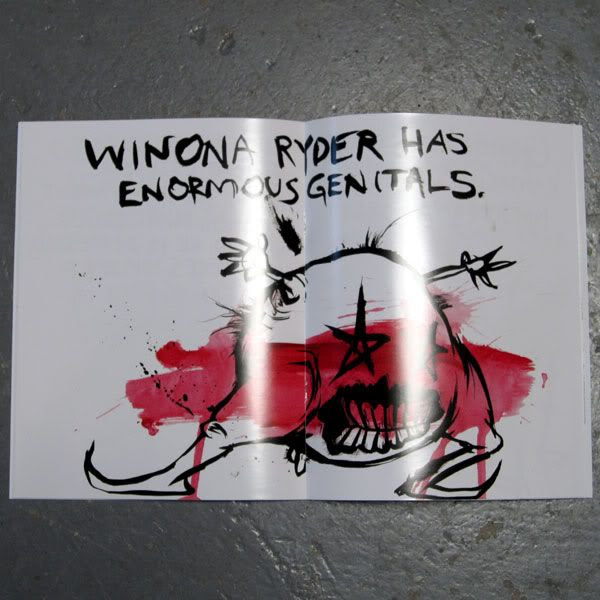 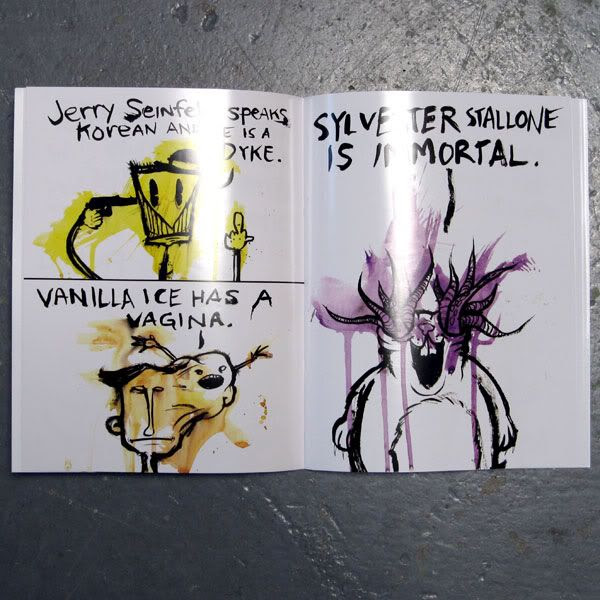 Regurgitated by alexpardee at 9:35 AM

A really cool, in depth article just got published online at CGW Magazine about the whole development process that has been going into creating the Chadam animated series that I am doing with HD Films an Warner Bros. And along with the article a few new screenshots got released, too! With your first look at the villain, VICEROY! I made a quick little collage below of some of the new shots as well as a couple of storyboards so you can see how closely we are trying to recreate them! enjoy. 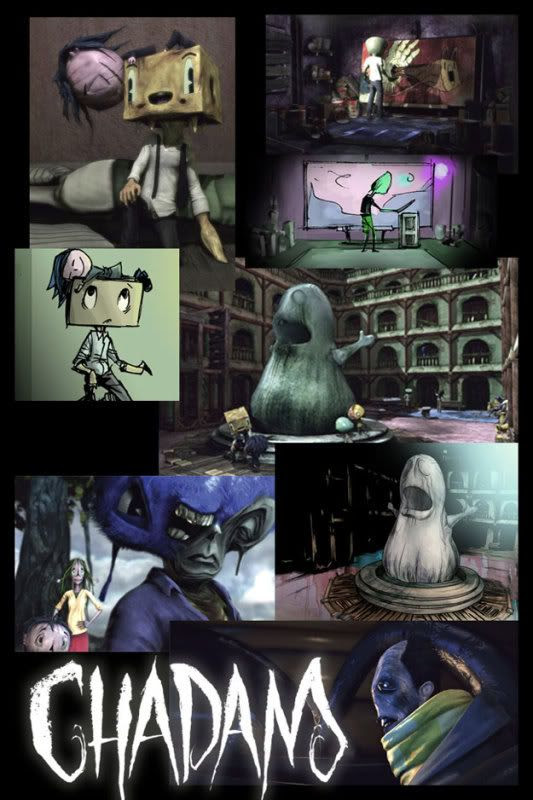 Regurgitated by alexpardee at 5:54 PM

My First Vinyl Toy EVER Up for pre-sale! 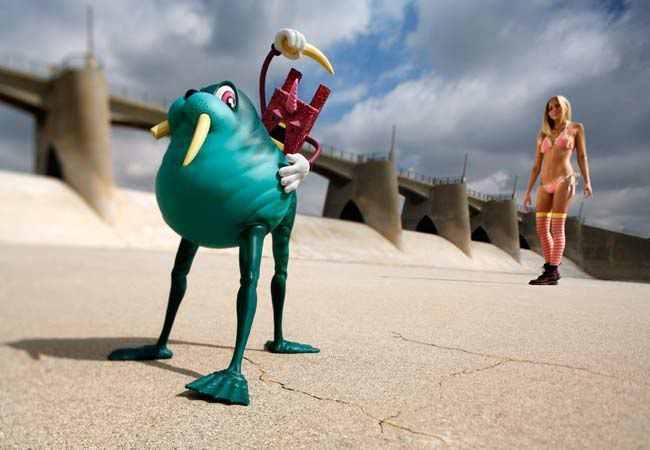 I am proud to announce that my very first original vinyl collectible toy is now officially available for pre-sale over at TheLOYALsubjects' website !!! The final toy, which i designed for Upper PLayground to celebrate their 10th anniversary, is insane and I worked extremely close with the sculptors and painters to get it as close to a perfect recreation of my imagination as possible. Bendable arms, removable "tusk-sword", and standing almost 10" Tall, and it looks rad in the package! I am really proud and excited that this will be released JUNE 14th!.
The quantities are limited so go make sure you reserve/pre-order yours now, and if you buy it and don't take it out of the box to play with it and help him exact his revenge, my face might be mad at you. grrrr.
CLICK HERE TO PRE-ORDER THE WALRUS RIDER FROM THELOYALSUBJECTS!

And as an added bonus, I was lucky enough to get famed toy photographer Brian McCarty to beautifully photograph the Walrus Rider (photo above!), caught in mid-fantasy, "dreaming of blondes" as he did before his legs were stolen. (Note: Brian's legs were not stolen, The Rider's were.)
The photo rules, and here is a cool pic of Brian setting up the shot. Make sure you check out more of Brian's work on his website 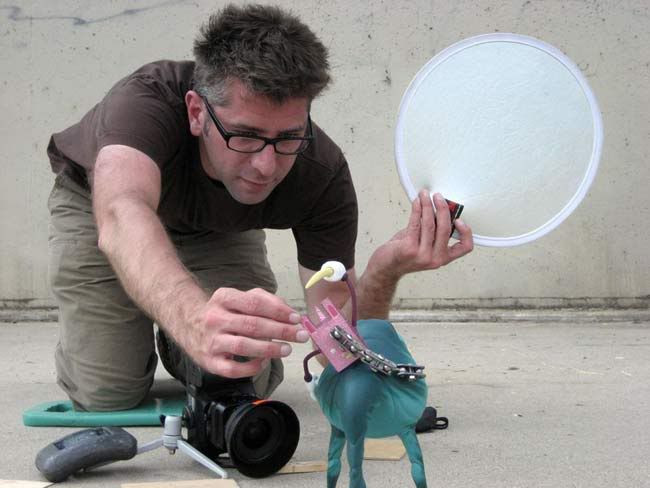 and in case you missed it, here is the story of the Walrus Rider:

Born with legs of a golden tint,
He'd walk, he'd run, he'd jump and sprint.
There's nothing much he COULDN'T do,
With legs of gold and wooden shoes
The girls all loved his limbs and knees,
For no one else had legs like these,
But jealousy arose with some,
Cause' HE was having all the fun!
So late one night upon his slumber,
Darkness drenched with rain and thunder.
There he slept and dreamt of blondes,
But when he woke HIS LEGS WERE GONE!
Who would do this tragic thing?
What good is a bee if a bee cannot sting?
And what good is HE without legs at all?
Now he cannot move and he's not that tall!
So he hopped on the back of his bestest friend,
And together they ride as he seeks his REVENGE!

Regurgitated by alexpardee at 2:49 PM