If you saw the greatest comedy movie ever this weekend, where a bunch of handsomely cuddly funnymen hole themselves up in a giant fancy house and fight off fancy demon rapists of biblical proportions while discovering why true friendship is important, then you either sat at home and watched a VHS bootleg of my favorite episode of The Hardy Boys Mysteries, or you saw Seth Rogen & Evan Goldberg's "THIS IS THE END"!!

If it was the latter (which it fucking well SHOULD be), then amongst the gut clenching laughs and silly giggles, you may have noticed that a few of my paintings (as well as some amazing other artists like Os Gemeos, Ron English, Shepard Fairey, and more) scattered throughout the set, some that even got destroyed and used for shelter. There's not many words I can express for how I felt when Seth, Evan and the production art team approached me about using my art in the movie. But the best way to describe it, is the "opposite of getting forcefully titty-fucked". The universe that this particular group of comedians and writers has created and evolved over the course of 10 years is ridiculously admirable and one of the funniest, most insane worlds to be able to witness as a fan of laughter and absurdity. So I freaked out with joy at the opportunity, even if the paintings never got any screen time. I just got to live vicariously as a fly on the wall in the form of a painting, and it was exciting.

So, that being said, if you saw any of my paintings in the film and took note, you're ahead of the game in this case. If not, or if you haven't seen it yet, what are you waiting for????? Go see it so you can win this contest!
It's easy!
All you have to do is make mental note of where/when particularly the following 4 (FOUR) paintings of mine appear in the film. They are all slightly obscured but if you know what to look for it's easy! Keep in mind where the paintings appear in the film and email your answers to me. The first 10 people to email the correct answers will receive a pack of signed 8" x 10" prints of ALL FOUR of these images for FREE! (I'm sorry, U.S.A. only, due to shipping restrictions).
All you have to do is describe where and when you noticed them in the film. I'll know what you are talking about. No need to take screenshots, since you shouldn't have your phone on in the movie anyway, that's a dick move! And I won't accept simply "James Franco's house" since the whole movie takes place there.
So yah, have fun watching the movie a million times to find them!!! Contest specifics below. 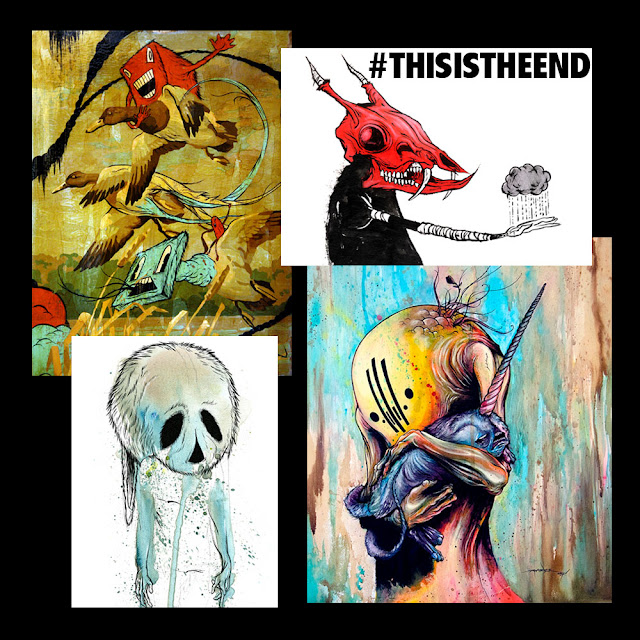 Here's the details:
1. Go watch "THIS IS THE END".
2. While laughing, pay attention to the backgrounds and look for THESE 4 PAINTINGS (in 4 separate locations) and take mental note or write down.
3. Send an email to Mr.AlexPardee@gmail.com describing where they were in the movie, along with your name and mailing address (USA ONLY).
4. If you hear back from me, you'll get some free prints. If you don't hear back from me by the time I post on Instagram or Twitter (@alexpardee) that the contest is over, then you didn't win but I really appreciate your eyeballs and your email.

Hopefully see you in a sequel when James Franco builds a new house!

Trailer for THIS IS THE END:

Regurgitated by alexpardee at 3:09 PM

We have a TON of magical things happening this weekend all throughout the world of Portland, San Francisco, and the WORLD WIDE INTERWEBS! So here is the rundown, starting with the virtual world of onlines!

As we've been warning you, our band new shirt "The Dream Gobbler" will finally be released for sale tomorrow online at the ZEROFRIENDS webstore!  This insanely glorious 12-color discharge-screenprinted t-shirt will not only scare every person older than you, but if you are getting mugged, it also doubles as a scary mask if you put it on your head in a pinch!  The legend of "The Dream Gobbler" is a little known whimsical tale, however, but don't worry. If you aren't familiar with it, the story is SCREENPRINTED on the INSIDE of the shirt as a bonus fun thing for your stomach to see while you are frolicking around getting robbed and stuff. It will also be available in GIRLS SHIRTS AS WELL!

And we still have a handful of the original "DREAM GOBBLER" Giclee prints for sale too.

We love Portland and Upper Playground so much that we recently set up our annual Zerofriends x UP x PDX Pop Up store in Portland. And to celebrate us opening the pop-up, Alex Pardee will be signing and sketching at the store at 3 PM this SATURDAY, June 15th. The first 40 people to show up will get a free surprise item. For FREE. It's a surprise! UPPER PLAYGROUND PDX. 23 NW 5th St. Portland.

We just released a brand new "WEIRD" PORTLAND EXCLUSIVE shirt at the store too. This shirt will only be available at the Portland Zerofriends store.

But that's not all.....we finally got one of our favorite shirts back in stock in a new color.

And our good friend and amazing artist "EMONIC" will be doing live art and sketching at the San Francisco ZEROFRIENDS store this Saturday from 1-5. See you all soon! 419 Haight St. San Francisco.

Thanks again for all of the incredible support that allows us to keep making fun stuff!
Regurgitated by alexpardee at 4:02 PM

Craola Signing this Sunday in SF!

This Sunday, June 9th, at our Zerofriends San Francisco store we couldn't be happier to play host to one of the most influential, imaginative wizards in the art world today. Making a stop on his art book release tour for his brand new painting book "THE OUTSIDE", the magical GREG "CRAOLA" SIMKINS will be making a rare appearance in SF, signing and selling limited copies of the "Silver Edition" of "THE OUTSIDE".

What is the "Silver Edition"? It's a special, limited edition of the book with a silver cover and an exclusive print included. Because this is such a rare Bay Area appearance for Craola, you MIGHT be made fun of a lot if you miss this opportunity. So seriously, DON'T MISS IT!
Here is all of the info:

WHEN: Sunday June 9th, from 2-4PM
WHERE: ZEROFRIENDS SF Store
419 Haight St (around the corner from Upper Playground)
San Francisco, CA
WHAT: GREG CRAOLA SIMKINS will be selling and singing "silver editions" of his new art book "The Outside". The cost of the silver edition is $85.00.

Also this weekend, SATURDAY to be exact, at our Oakland Zerofriends Gallery, a brand new collection of apocalyptic treasures will be on display courtesy of the one and only madman, BRAD ISDRAB as he opens his new art show "DRAB FUTURE", featuring photos, props and toys featured in his insane upcoming indie sci-fi series of the same name. To get a glimpse of his collection that is even more amazing in person, check out this teaser and come hang out this Saturday, where the FIRST 40 PEOPLE TO ATTEND GET A FREE PRINT...FOR FREE!
Saturday, June 8th, from 5-8PM
ZEROFRIENDS OAKLAND
489 25th St Oakland, CA

Regurgitated by alexpardee at 10:35 PM