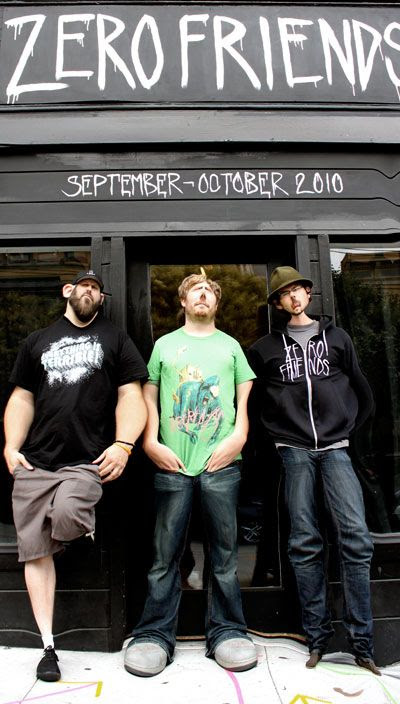 I basically grew up in retail stores. I spent a majority of my days as a kid tagging along with my parents to malls and Mervyn's and Gemco, hiding inside the clothing racks pretending I lived in some kind of fort made from magical stretch pants and blouses, barely able to refrain myself from tugging on my mom's pant leg screaming "THIS IS SOOOOO BORING" solely because there MIGHT be a chance that we could grace the maybe-haunted TOYS R US in Concord with our presence, and a slighter, but possible, chance that I could get another Stormtrooper figure or whatever newest He-Man villain was floating there on the racks. That is, if I behaved during the madness that was Marshall's & ROSS.
My love for malls and retail stores obviously grew on me as my first, and basically only job I had as a teenager, was working at K-B Toys in one of the smallest malls in history in Antioch, CA. I worked there for 9 years and, in all seriousness, the people-watching that occurred DID inspire me both emotionally and visually more than anything I ever participated in in high school, but that's an entire other set of a hundred stories that would make CLERKS look like a fucking episode of Friends in comparison.
Anyway, it seems I can't escape the allure of a beautiful retail store atmosphere. Our first venture into the retail world was by taking Zerofriends to New York for a few months, which went over INSANELY AMAZINGLY). So now, we have come back to our home base and are jumping into one of our favorite neighborhoods in San Francisco, the Lower Haight. Joining a nice close-knit group of some great food, apparel, and art stores, like Upper Playground, 5024SF, Lower Haters & the ill BBQ spot Memphis Minnie's (sorry animals, I still like eating you for nutrition). Oh yah, and Walgreen's is right there too in case you need a lighter and some deodorant!
So yep, now you know. It's official. As of Wednesday, September 1, Zerofriends will be OPEN in San Francisco for 2 months! Here is the official info:

ALSO, (although it sounds like an oxymoron) WE ARE HAVING A SMALL-GRAND OPENING EVENT ON SATURDAY, SEPT 4 from 2-4PM. I will be hanging, signing, and making bad puns live in person. So come on down:)

And check up on the store every now and then if you are in the area, as, since it IS our homebase, we are going to have some good surprises. We have some secret artist singings & releases, movie-nights, and who knows, maybe we will just camp out there sometimes:) Hope to see you there! 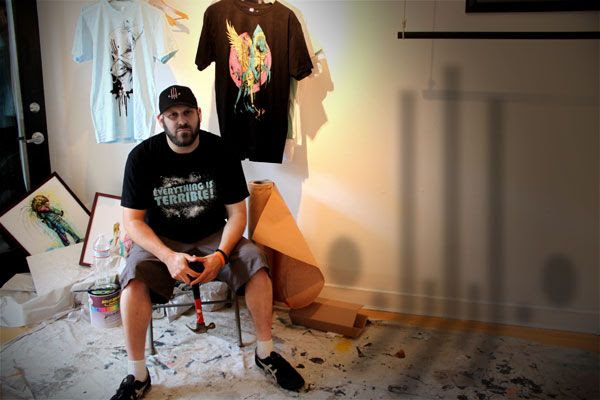 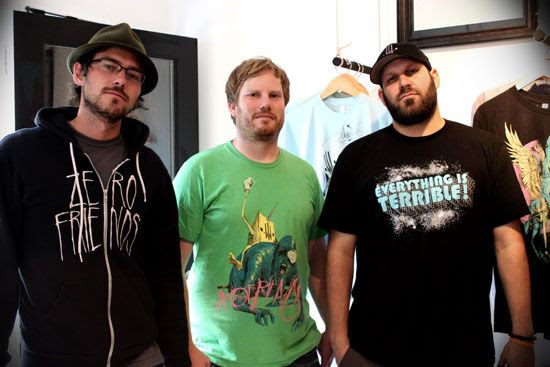 Regurgitated by alexpardee at 12:03 AM

Hilarity ensues when an out-of-work Intergalactic Bounty Hunter escapes space and moves in with a nice family in Connecticut to help babysit and cook for them! Coming soon hopefully. I have the whole series mapped out in my head. Gonna be huge. 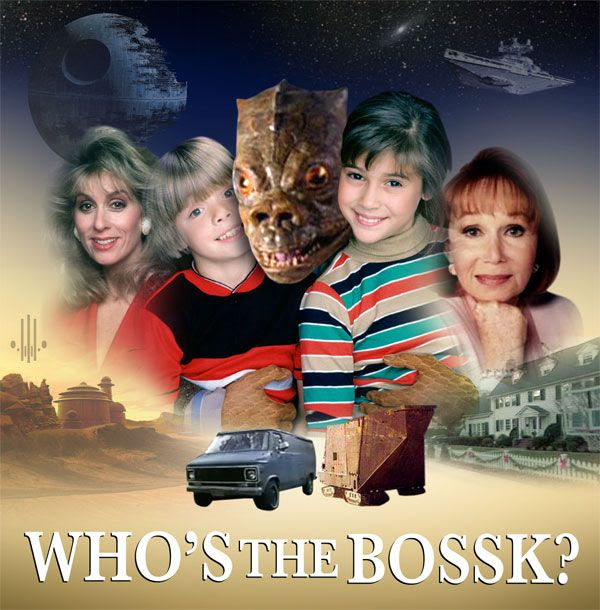 Regurgitated by alexpardee at 10:54 AM 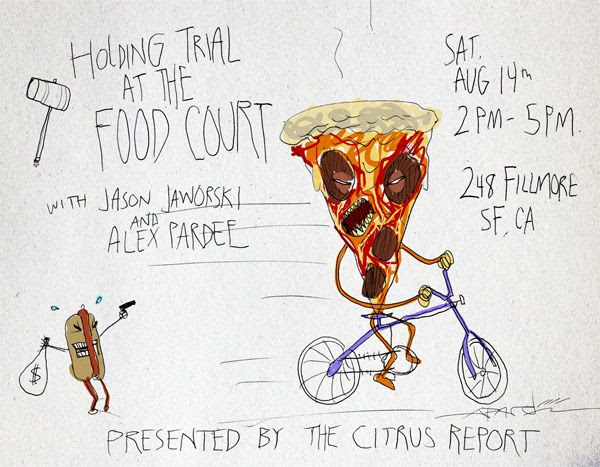 Well, if your dating profile looks like a perfect match for the above questions, then read further, as your Saturday is gonna get a little more awesome.

Over the last few days, THE CITRUS REPORT has opened their office doors and allowed the amazing underwear-clad photo-journalist & author JASON JAWORSKI to sit down and type out some fun, on the spot customized stories for patrons of the community. How cool is that? Jason is like a living ZOLTAR MACHINE, typing out immediate stories, fortunes, facts, etc. He is an amazing researcher and unlike Google, he doesn't rely on outdated technology for reference. Instead, he just makes shit up out of his imagination-google! Jason and I both live most of our lives inside of our imaginations. And tomorrow, Saturday August 14th, At the CITRUS REPORT OFFICE in San Francisco, our Wonder-Twinmagination powers are going to unite and gift you with customized (*though possibly terrible) portraits and stories of your favorite food item!

Here's how it's gonna work, if you are in the area:)
"HOLDING TRIAL AT THE FOOD COURT"
Custom Stories & Scribbles by Jason Jaworski & Alex Pardee
1. Come stop by The CITRUS REPORT OFFICE between 2PM - 5PM, located at:
248 FILLMORE ST (Lower Haight & Fillmore)
San Francisco, CA
2. Communicate with us a type of food that you love. You can use any form of communication. You can write down a food on a post-it. You can draw a piece of food. bring in a photo. actually bring us the dish (we might love that!!! hint). attempt to communicate telepathically on some Cris Angel shit. Or you can just say "pizza" or something.
3. Be prepared to hang for a few minutes as I scribble an inaccurate but maybe cute drawing depicting the secret life of your food of choice, while Jason Jaworski will use an ancient machine to type out an original story about your food!
4. Look at your food differently the next time you eat it:)
5. Have fun. 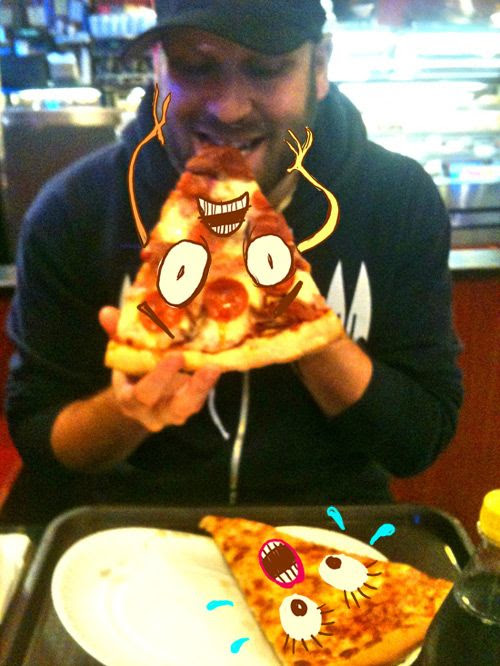 Regurgitated by alexpardee at 6:59 PM

I just had an amazing 4 days in LA knocking out a whirlwind of things, including this, my new favorite picture. Cerebral Ballsy. On G4's Attack of the Show set, with hosts Kevin Pereira, Chris Hardwick, myself & Jeben Berg. Word. 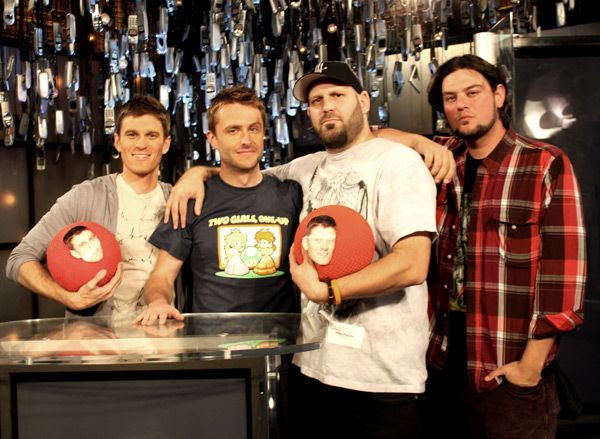 Regurgitated by alexpardee at 1:31 PM

We all get lonely. Period.
I do. You do. Married couples do. Polygamists do. Those Siamese Twin country singers that are joined at the head do. Hell, I bet even Eddie Brock and his symbiotic alien Venom suit get lonely for a few minutes a day when one of them is sleeping. It's a natural and constant emotion.
Loneliness is just a passing of time though. You get through it. Sometimes we can look at our watch and just wait it out. Sometimes we attempt to move it out of the way by replacing it with other things. Sometimes we sit and stare at the television or a book and attempt to lure it out of us with a combination of words and images that we hope will fool it into hiding for a while. Sometimes, we have no choice so we just force it down and hope that it doesn't vomit itself back up in the middle of the night while we are staring at the back of our eyelids, pretending that the sounds in our stomachs are coming from somewhere outside, struggling to put our arms in a comfortable position until one of them finally settles around the one half of the pillow that feels most human. Sometimes it does seem like it's possible to die from being lonely. Loneliness morphs into sadness. Sadness changes into lethargy, and the possibility of literally sinking into the earth from lack of love or friendship to keep you afloat seems very realistic every now and then. When the body of a suspected suicide victim can't be found, perhaps it's because they DID sink into the ground, adding their spirits to the ever growing "friend request list" of the planet. I mean….Earth must get lonely too, right.
I don't know.
There's certain things that are great about spending time with ourselves. But then again, there's certain things that make being completely alone a constant reminder of our insignificance as well. I have a funny story from today…but no one to tell it to. I hate this T.V. show, but no one to complain about it to. I can sleep alone. Or I can stay awake all night alone. Makes zero difference. I finally cooked by myself, but now I'm choking, and no one is here to help me…
Myself, along with the entire Zerofriends crew, understand some of the variable loneliness that we all feel. Which is why we wanted to reassure you that, though you may not know it, we supply you with a little extra cure for loneliness. Every one of our shirts is an individual living being, and every one of our shirts loves being wrapped around your torso, and loves listening to your stories. Every one of our shirts loves watching the movies you watch. Loves tasting the mustard that falls from a random bite of food. Loves sleeping on your floor next to you while you are in bed. Loves traveling with you, and basically….just loves being AROUND you.
And on that note, here's a little love letter to loneliness from us and Zerofriends' resident filmmaker, the amazing Stephen Reedy. Check it out, and then maybe head on over to the ZEROFRIENDS ONLINE STORE and grab a little torso-friend or 2. And remember, if you have ZEROFRIENDS, you always have at least ONE.


Goodnight….
I'm gonna go lay down by myself. And my shirt:)
Word.
Regurgitated by alexpardee at 1:43 AM

TONS OF NEW PRODUCTS UP ON ZEROFRIENDS!

When I was young, there was a fad going around from a company called KLUTZ, that used to teach kids how to juggle. However, it just taught us how to juggle these completely stupid tiny heavy pillows. It should have been teaching us how to juggle multiple jobs, mental tasks, and responsibilities, because that would have actually been useful.
So yah, I am still playing catch up and juggling all of my responsibilities that piled up while I was gone for Comic Con.
So, it took me a week, but I finally just put up all of the new products (and restocked on some older ones) that were released at Comic Con on the Zerofriends Online Store! So please, take a few minutes to go see what we have added, because there is a LOT. Highlights include:

So yah, go check out the store by CLICKING HERE OR ON THE PIC BELOW!!! 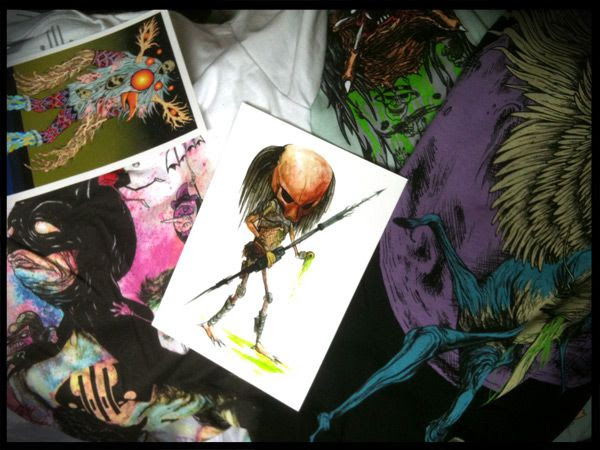 Oh, also, I'm not sure if i mentioned this before, but there is a really cool new gallery and boutique open in Salt Lake City called "BLONDE GRIZZLY", who carries all of our ZEROFRIENDS stuff and a ton of other art-related fun-ness, recently held a Saturday Morning Cartoon show and I put up some very elusive prints in the show, as well as an original piece. Those, plus other art by Vic Back, Mark Yamamoto & more is all up for sale now on THE BLONDE GRIZZLY SITE:)
Regurgitated by alexpardee at 11:08 PM

New Interview up at JUXTAPOZ! 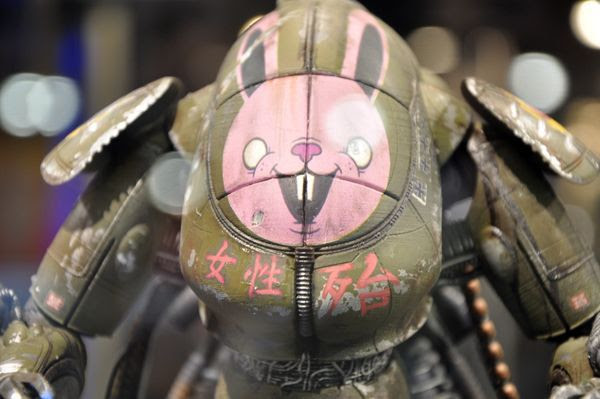 A really really nice, in-depth interview just went up on Juztapoz Magazine's site that TRINA CALDERON conducted with me while at Comic Con last week, all about my involvement in Zack Snyder's SUCKER PUNCH, as well as Zerofriends and some other big stuffs:)


CLICK HERE or on either of the pics to go check it out!! 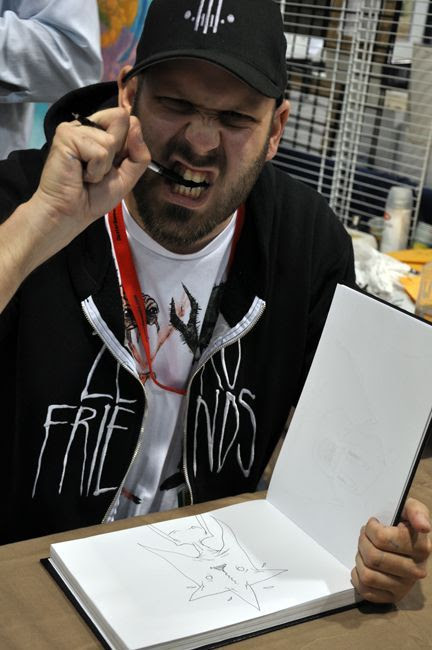 Regurgitated by alexpardee at 5:30 PM 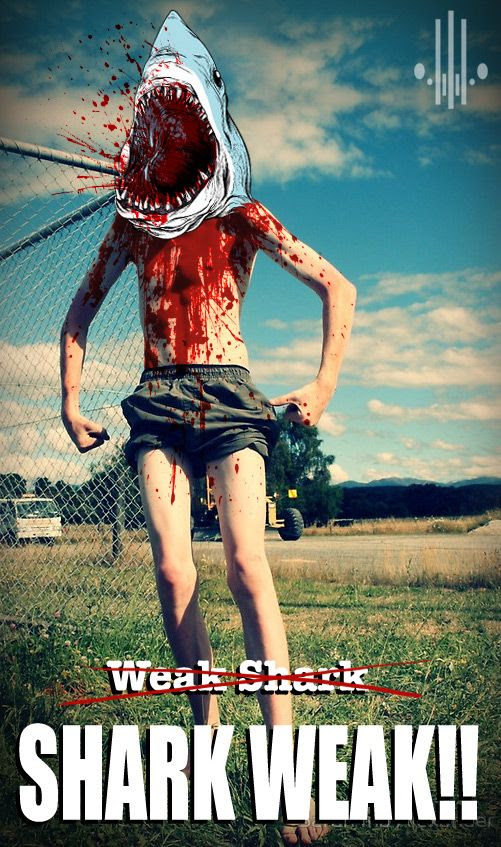 Regurgitated by alexpardee at 1:20 PM