Sometimes I paint in public, often times poorly because i crack under pressure. And sometimes, my friend Z-man from Gurp City raps, often times incredibly, because he is awesome. Every once in a while, because of brand new technology called Final Cut Pro, we can perform TOGETHER. And i painted so fast this time, I managed to finish before his song was done, AND i changed my clothes in the middle of that shit.
Enjoy.

Here is me painting at the OWLEX show @ Upper PLayground PDX in Portland, OR.

Regurgitated by alexpardee at 10:26 PM 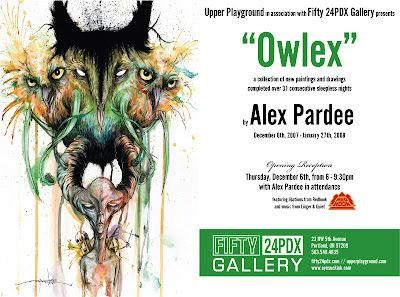 It's about that time again.
Yes, in addition to it being time for me to switch to Sanka (if they still even make that), its art show time.
Tomorrow, December 6th, at 6pm, I will be debuting 30 new art pieces at Upper Playground in Portland, OR.
What is so special about these 30 pieces, other than they are some of the most expensive pieces of toilet paper you can buy?
Well, I have had months to get ready for this show. However, because of my workload, i ended up not having ANY time to get any paintings done. So i decided to use that to my advantage, and try to be all science-experimenty, and I made a decision that would almost cost me my life, and most certainly my health.
I decided that for the entire month of November, I would work on my commercial work stuff during the day, and then at night, when i am supposed to be sleeping, i will instead stay up and paint and draw for the UP show. That way, i'll see how i perform under pressure and natural hallucinegins.
It went ok for a while, but after a couple of weeks, i wasn't doing very well. I was nauseated, shaky, my heart felt like it was shivering and screaming at me like some horrible American Idol audition. My thighs burned and my hands felt frozen. I didn't NOT sleep, i think that would be impossible, or at least it would mean I'm feeling guilty from a hit n run (see The Machinist). But i limited myself to about 2-3 hours at the most per night.
I thought it might make my work shittier, but in fact, the experiment seemed to work pretty well, because for the first time almost ever, i am pretty happy with what i produced. And the lack of sleep just made me not care if i was painting something shitty. I simply found myself almost sleepwalking through paintings, snapping awake to find out that I painted a pair of square-shaped bank robbers riding on the hood of a tentacle-faced eskimo. Ok, I can deal with that.
So yah, thats how it went. And, with the help of Adam Peterson, I was able to realize my new favorite made-up-in-the-third-trimester-of-my-sleep-deprivation character, Owlex, in tres dimesiones, just in time for the show. In case you are wondering who the Owlex character is, its my superhero alter-ego, who is a skinny, savage half-naked superhero who wears a homemade owl mask and protects animals from the rough and grimy streets of NY. And he can do magic. yahhhhhh.
Anyway, if you are in or around Portland, OR, come down to Upper Playground and check it out.
Oh, and i painted some stuff on the walls, too.
Happy Hannukah and Early Christmas, yo.
I love you. 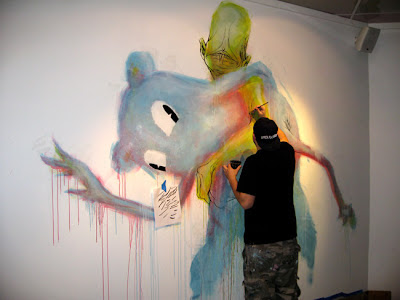 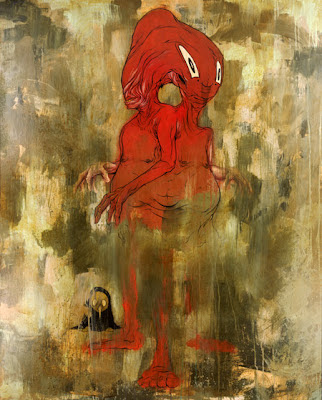 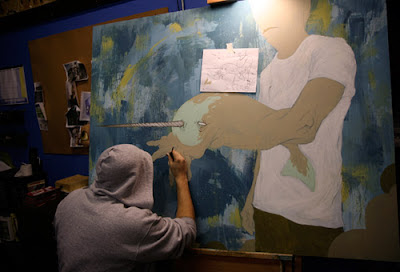 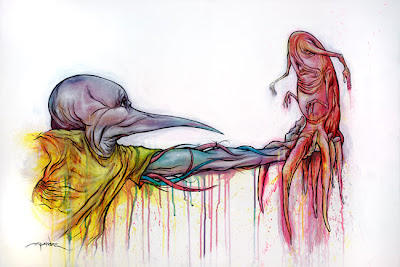 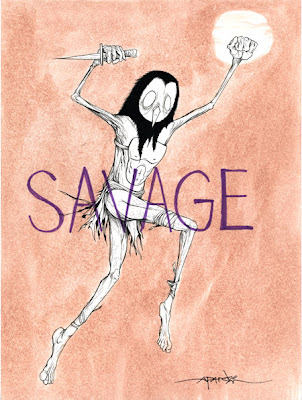 ANd here is me painting one of the pieces while CocoRosie sings to you about werewolves and her schizofranic father.

Regurgitated by alexpardee at 12:10 AM