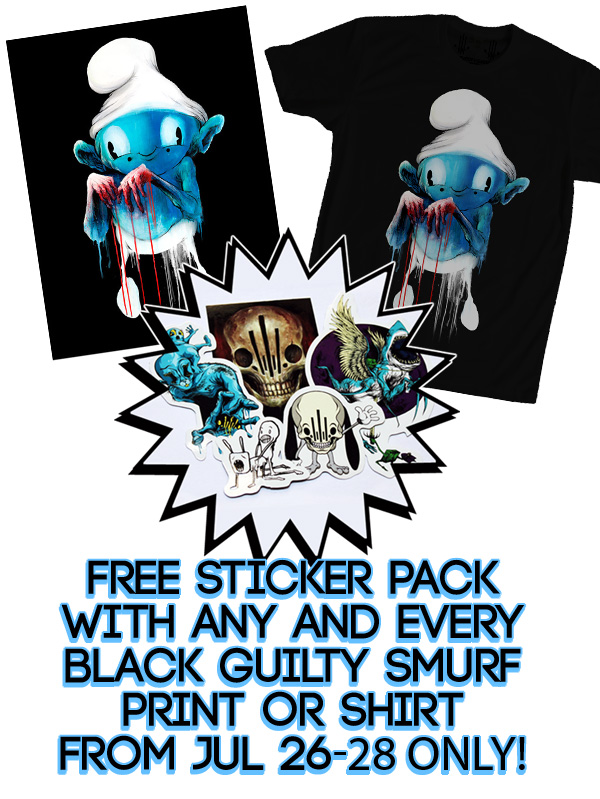 We just literally rolled in from Comic Con, practically on gurneys, after 8 days of intense tickling, i mean exhibiting. No, not Xibit'ing, where we talk in a deep voice and put PS2s in trunks of cars, exhibiting! At Comic Con! And it was great, so thank you so much to everyone who came and saw us (and actually FOUND our booth) at Comic Con this last week. It's more than appreciated, especially when you could have spent all of your time roaming around outside in Godzilla's territory or getting forced to Karaoke in Adult Swim's Fun House.

Over the next few weeks we will be re-stocking and releasing ALL of the items that we had available at Comic Con online on the Zerofriends Store.

But first, why not put up our best selling new items??
AND...why not give you a bonus for being patient while all of the Comic Con folk got first dibs?? 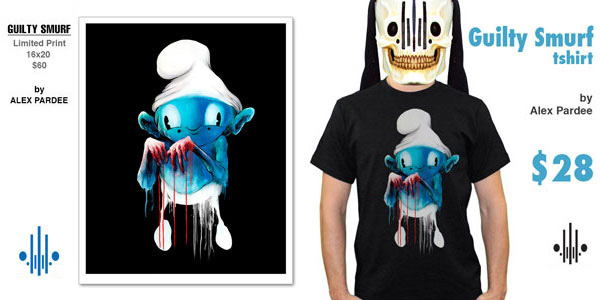 That being said, starting tomorrow (technically tonight at midnight EASTERN time) July 26, and through July 28, any and every "Guilty Smurf Black" print or t-shirt that you buy will automatically get you a FREE Zerofriends sticker pack shipped along with it just for bein sweet! (NO NEED TO ADD THE STICKER PACK TO YOUR CART, WE WILL DO IT AUTOMATICALLY).

So yah, Guilty Smurf Black will be released tomorrow, and you can get free stickers along with it! The end!

You can purchase it starting tonight at midnight online only at ZEROFRIENDS.COM 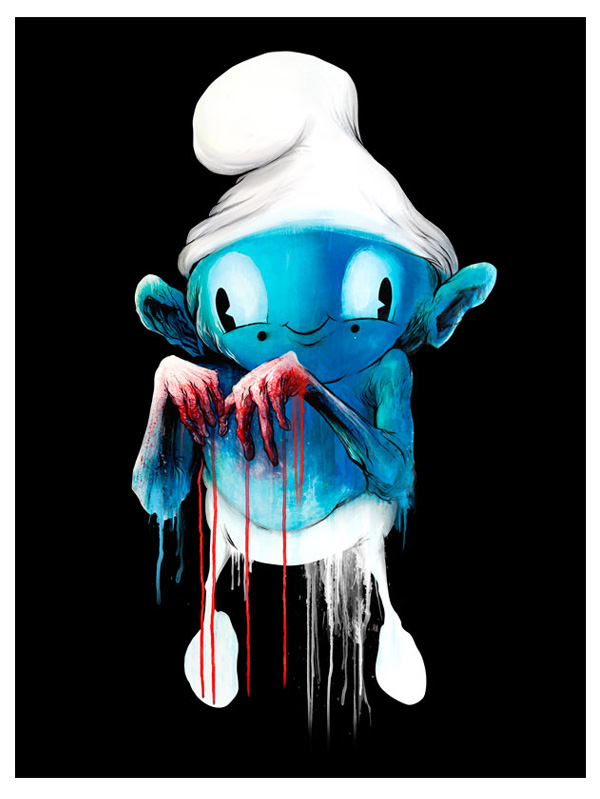 Do you even know the STORY of Guilty Smurf?? NO?? Well, here ya go, directly from my mouth-fingers-keyboard:

"One of the most secretive and mysterious of all of the Smurfs, Guilty Smurf kept to himself the entire time all of the other Smurfs were basking in the glory of the limelight from the Saturday morning cartoon show and the popular toys. In fact, there wasn’t a single MENTION of Guilty Smurf in all of Smurf-lore until after the incident.
Envy had built up inside Guilty’s soul as he sat in the darkest mushroom apartment, silently pining for the attention and fame that the other Smurfs were getting. But he was too prideful and stubborn to join the party after they were famous.
So instead, he sat. And HATED.
After 6 seasons of cartoons, he couldn’t take their arrogance any longer.
In one smurfy afternoon, Guilty emerged from his mushroom abode and bare-handedly slaughtered all 24 of those famous tiny blue fame-whores.
And then, he did something the others could never do.
He murdered Gargamel and his pet cat Azrael, too.
With blood drenching his blue hands, Guilty Smurf returned to the now-quiet (and cancelled) Smurf village and slept quietly and happily forever."
Regurgitated by alexpardee at 2:56 PM 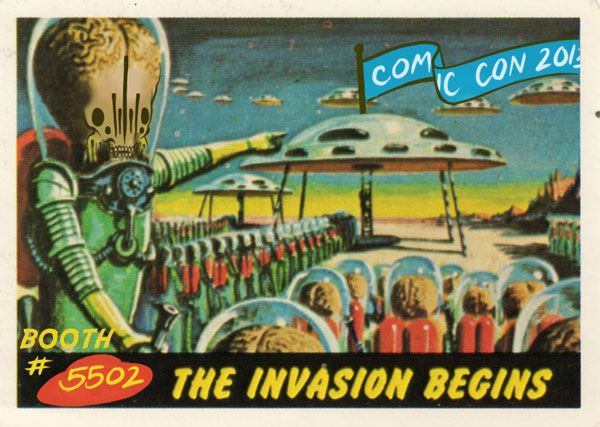 It's been 350 something days since I've smelled the sweat of 100,000 nerds and that HAS to change! So guess what? I'm gearing up my nostrils, packing up and going to San Diego Comic Con!


Considering that here in America we have little access to other tortuous "character-building" rituals, San Diego Comic Con is the closest thing I can imagine to walking on hot coals, stabbing yourself in the cheek with a barbed bamboo shard and circumcising yourself. In other words, It's AWESOME! Comic Con's a positive life-changing event that you should experience at least once in your life.  So, if this is your first time going, good for you! It's about time. You will now be one of the 100,000 weirdos that roams aimlessly and experiences feelings of overexcitement, dizziness, curious smells, and ultimate confusion as how there's a "sexy" version of Wolverine, what the hell a Bronie is, why Boba Fett is wearing Fred Flinstone's tunic and why no one is giving a shit about how crazy all of this is.

If you AREN'T going to Comic Con, none of this really matters right now anyway because it's been sold out since before Honey Boo Boo was famous for being shitty, and whole world suddenly cared about Instagram-Videos, Minecraft and Amanda Bynes' stupid nose.

But if you ARE going, please come by my ZEROFRIENDS BOOTH (#5502) and witness all of the BRAND NEW artifacts of awesome that we are shoveling onto your faces (pending the correct exchange of moneys of course:).
Which reminds me, by the way we will be ACCEPTING ALL MAJOR CREDIT CARDS AT THE CONVENTION BOOTH BECAUSE SQUARE IS AWESOME! So no need to stand behind the sweaty female Ice King at the ATM for an hour this time! Congrats, US! Now lets get on with the showcasing!! Start making your checklist now! 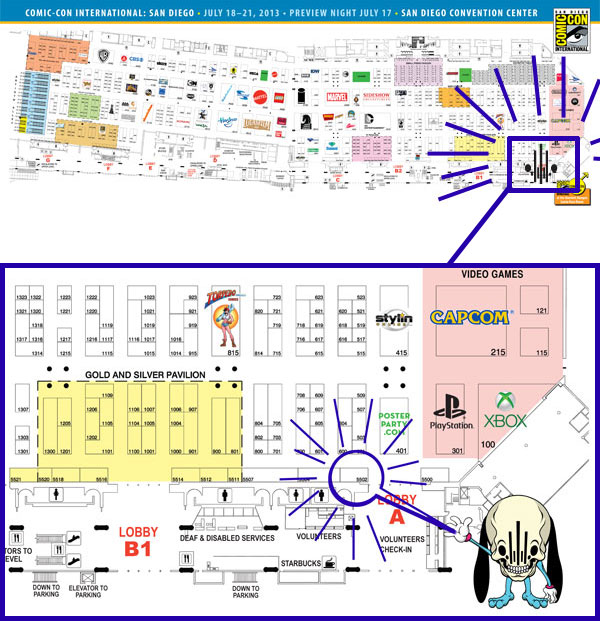 BEFORE YOU GET STARTED, PLEASE NOTE: Our booth number is 5502, which, logically, would be in the 5500 aisle. HOWEVER, there IS NO 5500 aisle. Instead, the 5500 aisle is the FRONT ROW OF BOOTHS. See above, we are actually located in the FRONT RIGHT CORNER of the convention center by all of the flashy video games that I will buy and not have time to play, in row 500/400!! If you get lost, refer to that awesomely clear map above.

Additionally, please follow MY INSTAGRAM (@alexpardee) and  MY TWITTER (@alexpardee) for any unscheduled signings, giveaways, and secrets, as I guarantee there's at least ONE cool announcement and at least 3 pictures of CHLOE and I getting into mischief.

Now that we have that out of the way, here is all of the madness that we are releasing upon your gorgeous face-headlights. Pay close attention, I'm only going to say it once, and then probably a thousand more times on Instagram.
RELEASE THE KRAKENNNNNNNS!!!!! Oh yah, and superhumans DAVE CORREIA & JON WAY$HAK will be singing at the booth, AND we are holding our first Treasure Hunt where there are 100 FREE limited edition signed prints that you can ONLY get by completing the Treasure Hunt. But you have to go to the ZEROFRIENDS BOOTH FIRST to get the details of how to find the treasure!!! 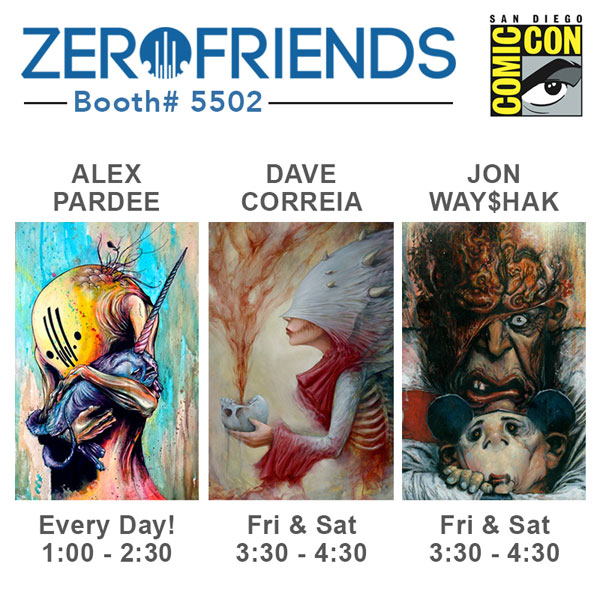 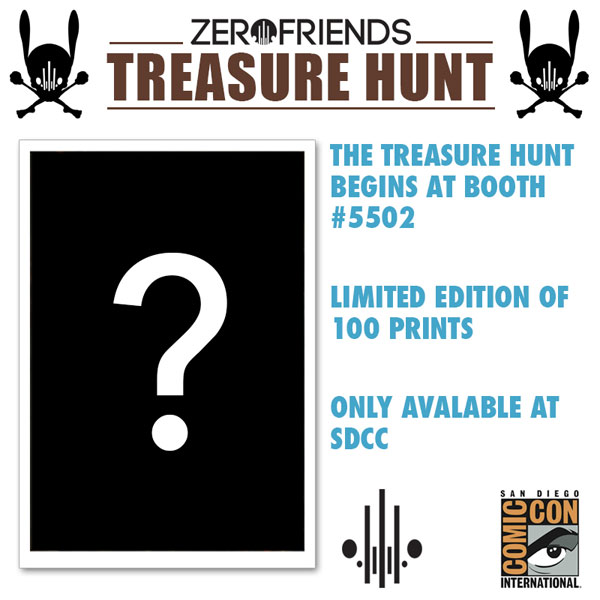 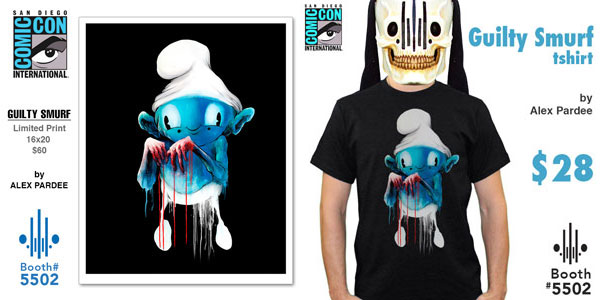 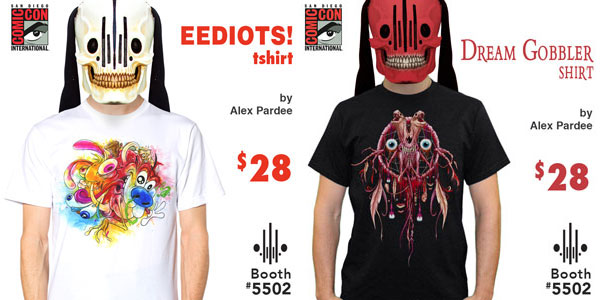 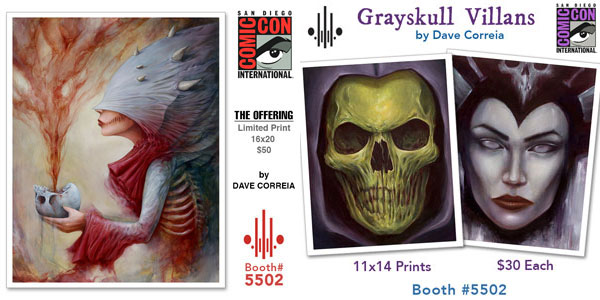 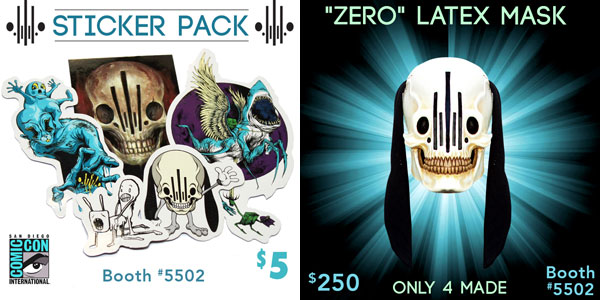 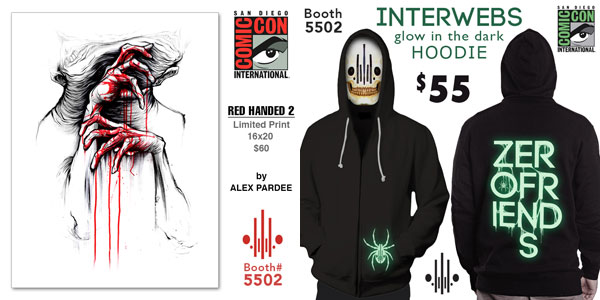 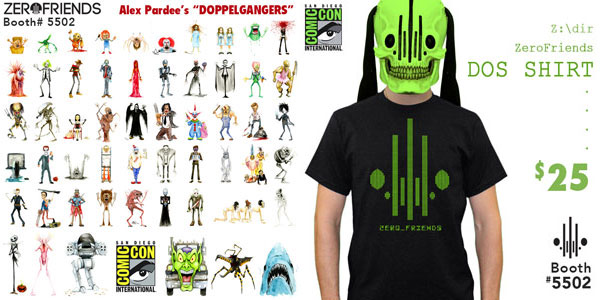 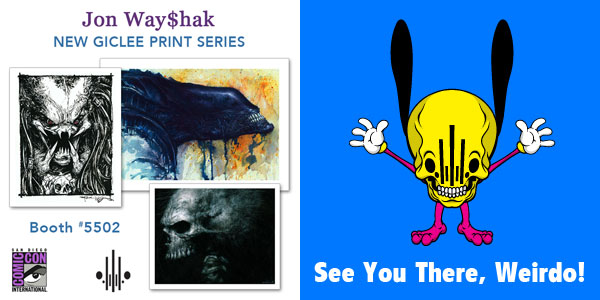 And as usual, we will have a fully stocked gypsy camp worth of our usual gems! 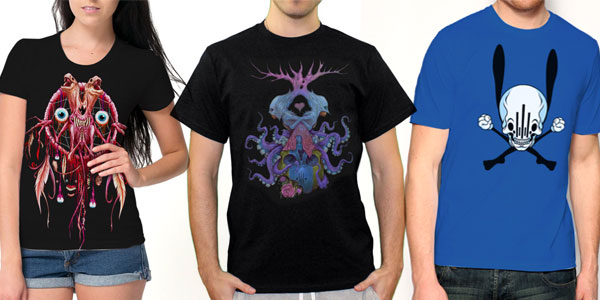 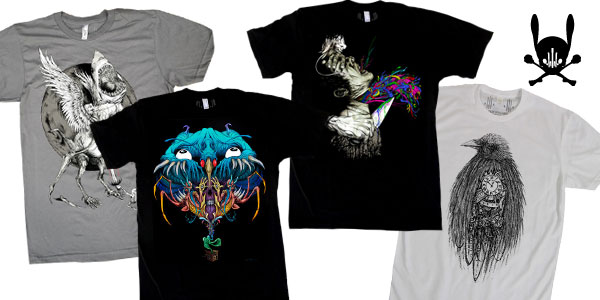 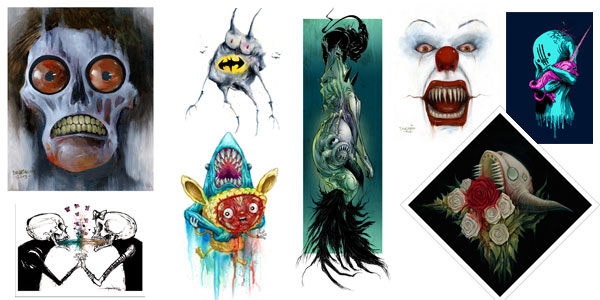 Regurgitated by alexpardee at 10:45 AM

"The Real Batman" ON SALE NOW FOR ONLY 72 HOURS! Regurgitated by alexpardee at 11:18 PM

Spoiler Alert: We have a brand new Timed Release "Real Batman: Toxic Edition" Limited Edition giclee print being unleashed this weekend exclusively on ZEROFRIENDS for only 72 hours!
Now, assuming you are super-interested in more information, let's Tarantino it back to the beginning and start talking about what's going on.

Comic-Con is creeping it's nerdy head around the corner, so naturally, our heads are spinning like tazmanian devils and our hands are cutting, folding, spilling, and high fiving in the middle of the heat. But before we blatantly toss all of our shameless promotion for Comic Con in your digital face, we have a little Pre-Con release taking place THIS ENTIRE WEEKEND for you folks that are smart enough to stay home and not brave the Comic Con rapids of death! It will be our last official release until after Comic Con, so set your annoying and intrusive iPhone alarms to make sure you don't miss it.

Starting THIS FRIDAY, July 5, at 12:01 PST and for the following 72 hours until SUNDAY, July 7th at 11:59 pm, we will be selling this new "timed limited edition" variant print of my favorite mystical superhero-hunter-farmer.

But first, take a moment to read about the origins of this wonder-man.

Here is the story about the REAL Batman:

"Not many people know this, but BATMAN (yah, your favorite masked detective) was based off of an ancient mythical cult icon. This particular iconic man was a simple bat hunter who, in a fit of symbiotic revenge rage, captured the bat that killed his wife and, since he couldn't live without his wife, he wanted to show the bat what it was like to depend on someone else for life and love. So the hunter shoved the Bat onto his head like a mask and forced the bat to remain a part of him. Shortly after, the tables turned and the hunter's foolish attempt at revenge backfired when he suffocated and died. The bat then took over the hunter's body and used his new found appendages and abilities to lead warriors to kill weak people because it was fun. True story."

So now that you know the story, and you realize that now you REALLY want to hang up a portrait of this hero on your wall to motivate you, you should worry no more because
THIS FRIDAY, JULY 5th, starting at 12:01AM PST, and ending JULY 7th at 11:59 pm we will be re-releasing one of our popular sold-out prints in an all new Limited Edition Colorway ("The Real Batman:The Toxic Edition), and it will ONLY BE AVAILABLE TO PURCHASE ONLINE AT ZEROFRIENDS FOR ONLY 72 HOURS! After that weekend (Friday, Saturday, Sunday), we will NEVER sell this print in this colorway and size again.

"The Real Batman: The Toxic Edition"
Signed and Numbered by Alex Pardee
Print measures 16" x 20"
The price will be $50.

So yes, from any single minute between July 5th at 12:01 AM PST to July 7th at 11:59 PM, you can purchase this new "Real Batman: The Toxic Edition" Limited Edition Print (as seen above) online only at Zerofriends.

Regurgitated by alexpardee at 7:38 PM