"Home Invasion" With Me & Shia LaBeouf on Funny or Die!

The "Home Invasion" video that I did when I broke into Shia LaBeouf's new house is up on the front page of Funny Or Die! Most of you have probably seen it before, but if you haven't, check it out right here:

And even if you have already seen it, please do me a favor and go directly to the page and vote "FUNNY" as I would hate to see it get murdered:)
Click HERE to go and vote. Or here is a direct link:

Thanks again! Look for a new Home Invasion video soon, as I like breaking into people's houses.
Regurgitated by alexpardee at 10:06 AM

Good morning, lovers.
In celebration of our favorite day of the year, Tuesday, February 23, Zerofriends is kicking off this magical day with a new interactive contest full of blood and slow-motion.
But first, let's take a look at what makes Feb 23rd so awesome:
Feb 23, 1455: Johannes Gutenberg prints 1st book, The Bible
Feb 23, 1886: London Times publishes its first classified ad. Craigslist is a close second 110 years later.
Feb 23, 1940: Walt Disney releases "Pinocchio". Old men all over the world fantasize about secretly building a little boy.
Feb 23, 2003: John Mayer finally wins a Grammy! SO RAD!
Ok, now that you know why we love Feb 23 more than any other date in history, let's get on to the contest!

As you may or may not have seen, Stephen Reedy (director of "The Winter Stalker") directed a fun Zerofriends commercial for us a few weeks ago called "BLOODBATH", which you can watch (if you haven't already, right beneath this colon:


If that doesn't show up, you can view it at this direct link here:
http://www.youtube.com/watch?v=B3snzWE7_EY

NOW, here is where you need to really start paying attention. Using the same exact footage from the original "Bloodbath" video, Stephen Reedy & Jenn Horvath remixed the shit out of it and gave it a completely different happy feeling! Watch:

So what does this have to do with you or the contest? Well, here are your answers and information:


Official rules of the contest:

1. Download the original, uncut Quick Time files for use in the contest HERE
Direct link to download files: http://www.megaupload.com/?d=F8NHFMQX

2. Play around with the video footage using anything you have access to. Add sound, music, voice-overs, narration, graphics. Make it funny, scary, musical, graphical...color it, conjure up your inner Michel Gondry, do ANYTHING YOU WANT, just make it awesome. You don't have to use all the clips. In fact, if you only use 1 clip, that's alright. The only restriction is that you make sure it's a commercial for Zerofriends.com.
3. Upload your video to your own YouTube channel, and post it as a RESPONSE to the original "BLOODBATH" video. To assure that we do see the video, you should additionally email the direct link to your video on YouTube to zerofriendsconstests@gmail.com
4. The deadline for submissions is Sunday, March 7, 2010. The winners will be notified via email and announced on Friday, March 12, 2010.
5. PRIZES:
Grand Prize: $250 Gift Certificate to Zerofriends.com (Or to our Retail Store in NY).
Three Runners up: $50 Gift Certificate to Zerofriends.com (Or to our Retail Store in NY).
How to win: Grand Prize winner will be OUR FAVORITE video, plain and simple. We will be judging SOLELY on CREATIVITY. Nothing else. Not quality of equipment used, or on the amount of time and money you spend on it. Simply creativity. That's what we love and that's what we are.
The Three Runners Up will be chosen based on VIEWS. The 3 top highest-viewed videos will be awarded the runners up prize. That means you should pimp out your video as much as possible!


SO GO GET CREATIVEEEEEEE. More importantly, have fun.
Word.
Regurgitated by alexpardee at 11:07 AM 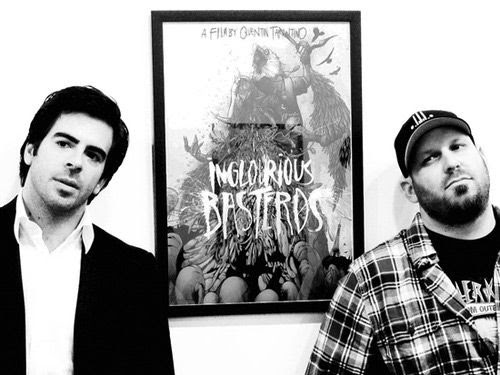 Just got back from the Inglourious Basterds Charity Opening at Upper Playground LA and had, what we astronauts call "a blast".
I got counseling, comfort, (and cupcakes) from Eli Roth in regards to my rocky relationship with Creepshow, shared horrendous bathroom experience stories with Dave Choe and Mickey Avalon, one-arm-hugged Danny "Machete" Trejo, formed a rap group with Omar Doom and Samm Levine, became jealous of James Jean's hair in addition to his skills, gave terrible advice to everyone I met, missed Nicole, got yelled at by a homeless Samuel L Jackson clone, met a bunch of fans and some artists I have been wanting to meet for a long time (Patrick Martinez, Munk One & Estevan Oriel) locked my car in a parking structure, and re-enacted the scene in True Lies with the horse.
I can't thank everyone enough for supporting the art, the film, and the cause.
I had a camera, but as usual I was too nervous to take it out of my pocket so I ended up stealing some pics from the internets to share with you. If you have any pics, let me know where to see them:)
See you soon, you Basterds.
And PS, a huge thank you to Quentin Tarantino, The Weinstein Co, Upper Playground and Red Cross for putting this event together. Let's do another one. 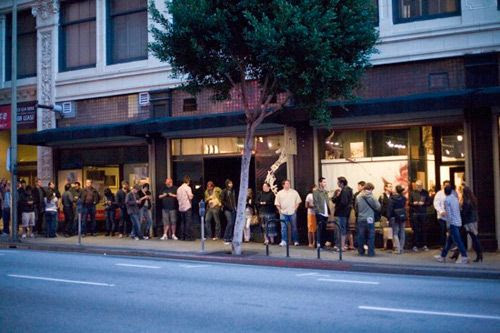 The line outside was huge all day. 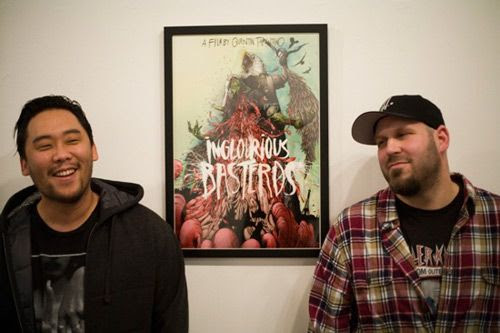 Dave Choe and I. We used to watch Dawson's Creek together. Can you tell? 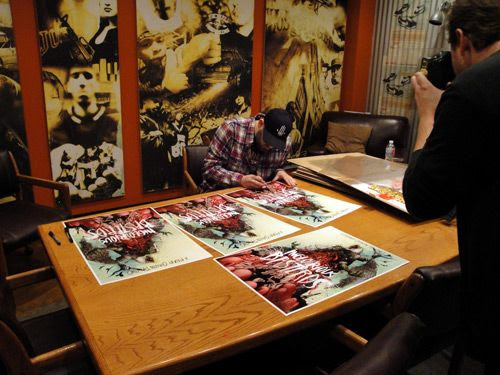 Signing my posters right before the event at SA Studios / Home of Mr. Cartoon & Estevan Oriel. 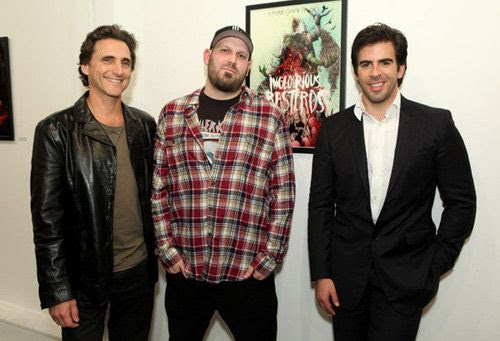 With Basterds Producer Lawrence Bender and The Bear Jew, himself, Eli Roth, who was actually just hilarious on Chelsea Lately last night, so watch that shiz here:
(Personal note which makes this ultra-cool: Eli Roth directed one of my top 5 favorite horror movies of all time, Cabin Fever, which is perfect and I will argue until I lose my voice if you think otherwise. The end. 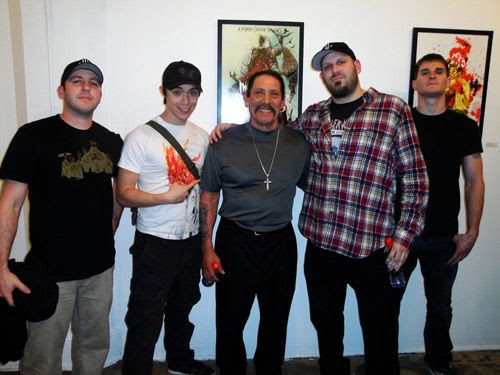 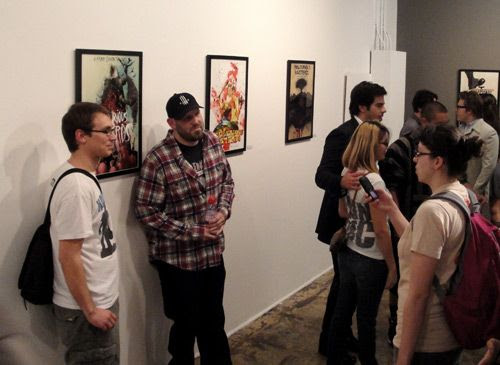 The guy on the left waited since 10 AM and was the first person to pick up my poster. THANK YOU!!! 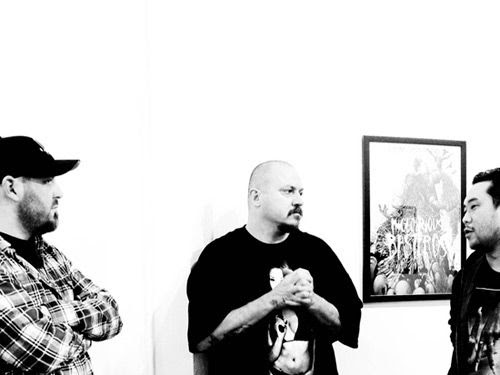 Me, Estevan Oriel & Dave Choe, discussing the best way to kill a man. 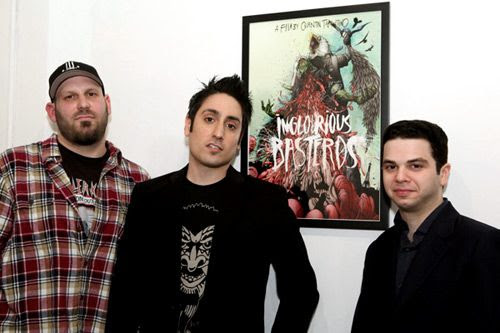 3 X Dope. The rap group re-united. Me, Omar Doom, & Samm Levine, both who were super rad to chill with. 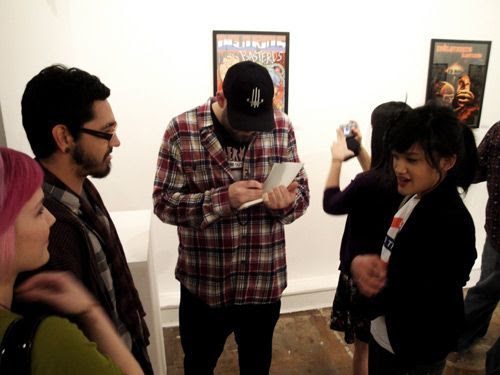 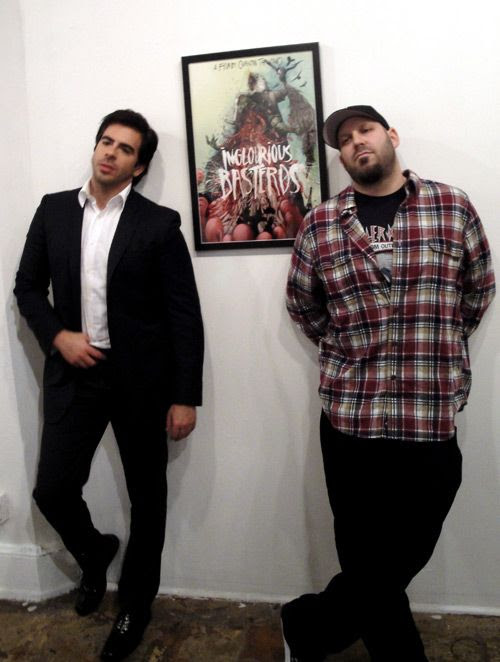 One more of Mr. Roth and I, as Mark Borchart instructed us, "being aloof." 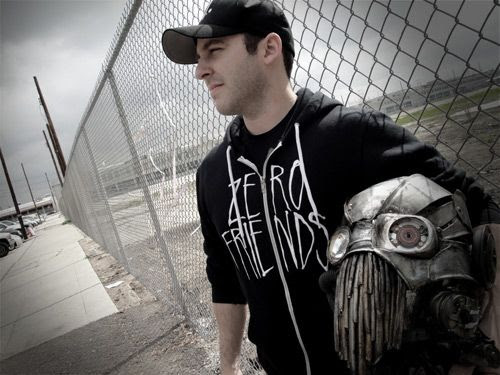 Dave Correia got post-apocolyptic head while were there. Fun.
Regurgitated by alexpardee at 2:45 PM

Quentin Taratino and I are BASTERDS!

"...and through our cruelty they will know who we are."
- Lt. Aldo Raine, "Inglourious Basterds" I've been sitting on a throne of Nazi secrets....kinda.
One of the most fun, most intricate, and digitally-bloodiest projects I've worked on in a while has finally been unveiled (above).
SA Studios Global's Film Marketing Division has teamed up with Quentin Tarantino, 12 Artists, Upper Playground and The Weinstein Company to present, "THE LOST ART OF INGLOURIOUS BASTERDS". And I am lucky enough to be one of those Basterds.
The above print, along with 11 other ultra-limited (ONLY EDITIONS OF 6!) prints, signed by Quentin Tarantino, will be exhibited this Thursday, Feb 18th At The Upper Playground Art Gallery in LA from 6-9 PM.
Here is the press release and info about the show and the charity involved, and below is some of my personal thoughts and details about the piece, which is easily my favorite art I have created in years.

SA Studios Global's Film Marketing Division has teamed up with Quentin Tarantino, Upper Playground and The Weinstein Company to present, THE LOST ART OF INGLOURIOUS BASTERDS.


On February 18th, 2010 from 6p - 9p the world will get to preview and purchase the “Lost Art of Inglorious Basterds” at The Upper Playground Art Gallery in Downtown Los Angeles. All proceeds from this program will be donated to The American Red Cross to help the victims of the Haiti Earthquake.

Each print will be numbered and signed by Quentin Tarantino. Only six (6) of each amount will be made.

The gallery will open will be open to the general public from 6p – 9p on Thursday February 18th, 2010 at Upper Playground Los Angeles located at 125 East 6th Street in Downtown LA. Attendees will have the opportunity to purchase the limited edition prints for $300. The prints are only available for purchase at Upper Playground, Los Angeles. Phone orders and web orders will not be accepted. Prints will be sold on a first come, first serve basis. The purchase of prints will be limited to one per buyer.


You can view all of the other posters
HERE!

Direct link to see all posters:


And now on to my ranting about the piece...
From start to finish, working on a "Basterds" image was easily the most fun I have had creating art in years. And because of that, it was one of the most time consuming.
The image I chose to create depicts, in simple terms, a vengeful Jewish-American slicing the neck of a Nazi soldier. However, every aspect of the composition, subject matter, and execution of the art was carefully planned out and all of elements fit perfectly within Tarantino's "Basterds" universe.
I chose to personify the Jewish-American soldier as a Bald Eagle not only because the Eagle is one of the most symbolic icons used in representing the United States, but the soldier, as a victim of Naziism, has been transformed from a humble man into a vengeful "bird of prey". In addition, with the Jewish population becoming the victims of an impending Genocide before and during WW2, in a way, Jewish citizens were, as a whole, becoming and "endangered species", much like the Bald Eagle.
The Nazi soldier is depicted, simply, as a Demon, complete with green skin and "blonde" horns.
Upon slicing the next of the Demon, gallons and gallons of monstrous, hate-filled blood pours out, revealing and representing years of anti-semitism, oppression, and a distaste for "parasitic races" (a term used to define other races by the Nazis, and the inspiration for the gore to resemble parasites). The Swastika appearing in the blood is simply a representation that this execution encompasses the whole Nazi regime, not just the one individual demon.
Though the backdrop of the film is World War 2, I created a more intimate composition between 2 characters rather than a large scale epic war scene because Tarantino's film is a much more character-driven film with smaller, more intimate encounters and conversations. However, we CAN see the Paris skyline in the background, as well as a small flag being waved in the distance, most likely a Nazi flag as the Nazis have occupied France during this time.
And if you look closely, the sky is filling with more eagles, foreshadowing that the Nazi's reign may be coming to an end soon.

Here are some random detail and in progress shots of the piece, as I seriously wanted this to be the most detailed piece I've ever done. Don't know if I succeeded, but I had fun. Now that I think about it, that's probably how Jamie Kennedy describes his career. Cool, I finally have something in common with him:)

Anyway, check out the details, check out the other posters, and come down tot he show if you are in LA. I will be there drinking root beer and floating around so say whattup! word. 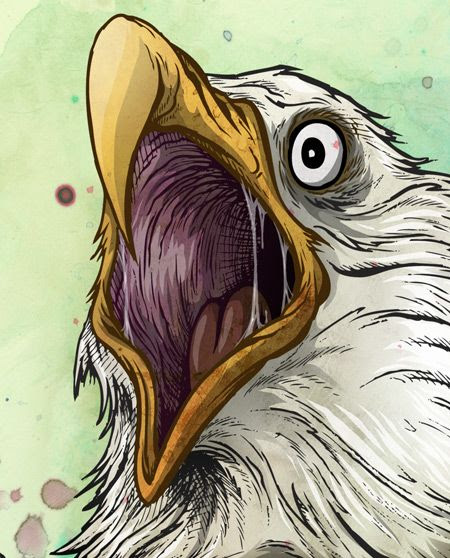 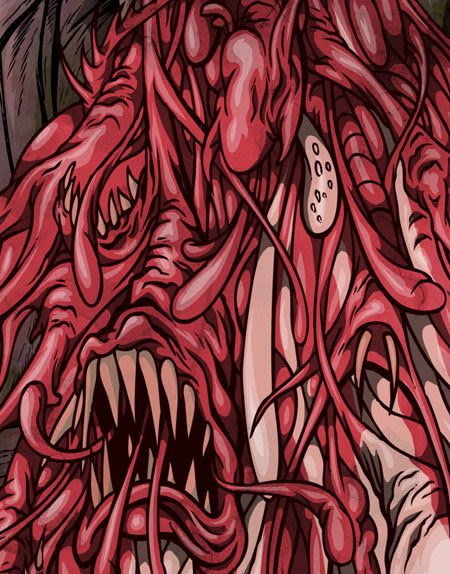 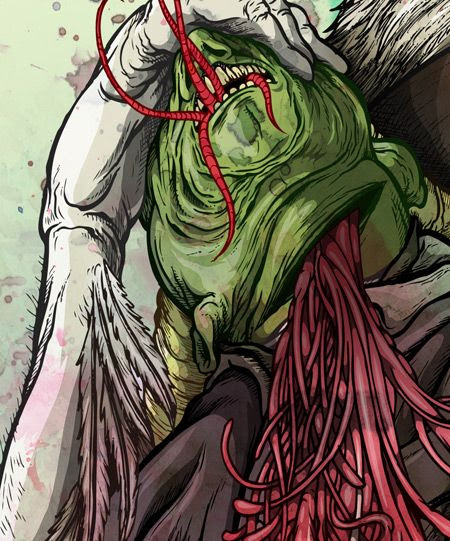 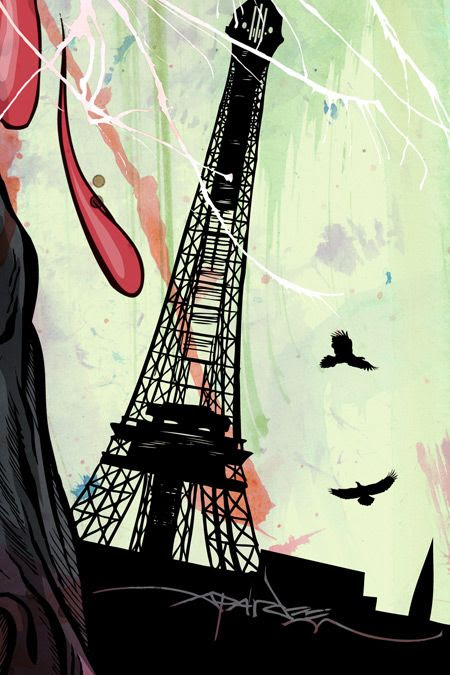 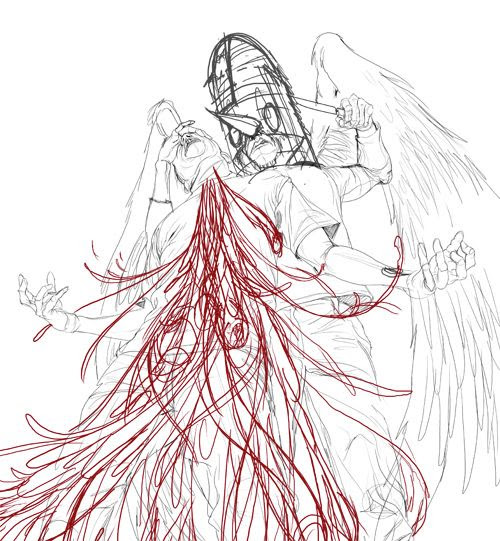 During the original sketch phase, I wanted to make the Jewish-American more of a humanoid wearing a makeshift Eagle costume, but it made more sense to just go ahead and make him an actual eagle. 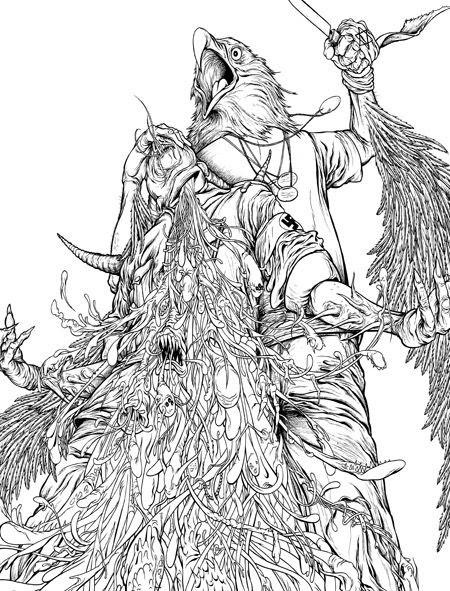 Regurgitated by alexpardee at 4:18 PM