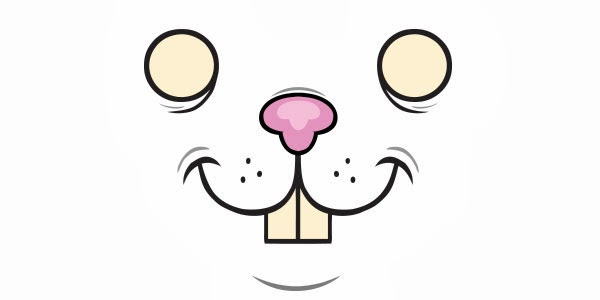 If you're new to "BUNNYWITH", don't worry. Unless you have the intellect of Dennis Rodman, I think you'll catch on pretty easily. Just hang in there.

For being such a simple concept, I have a million over-complicated things to say about BUNNYWITH, a character and idea that I came up with almost 15 years ago while trying really hard to decipher the incoherent Jamaican accent of my Algebra teacher at Sacramento City College. But for now I'll be fairly quick. Because that origin, much like every other evolutionary step in my goofy little armless rabbit's life, felt like a joke. A long joke that might someday be worth telling, but also a joke that I pretty quickly took seriously because it was the only thing in my life at the time that made me laugh.
Well, I've managed to find other numerous ways to laugh since then, no help from Duck Dynasty, littering, OR Morgan Freeman, but nothing that has caused me to ever forget about BUNNYWITH.

After two comic books, a short-lived web-comic, plush toys, mini-vinyl figures, a still-in-progress phone app, and a few years in between, I felt like now was the right time to introduce Bunnywith to a new environment. And a new audience: the completely accepting non-judgmental, non-pretentious....art gallery world. I think he'll be OK, though. After all, he managed to survive being the only plush toy ever on major retail shelves to come packaged with an aborted fetus. Plus, Bunnywith has been bugging me for months to be let out of his drawer (yes, he sleeps in a drawer. Not MY drawers, A drawer).

Here's how it works for any of you wide-eyed beautiful newcomers: 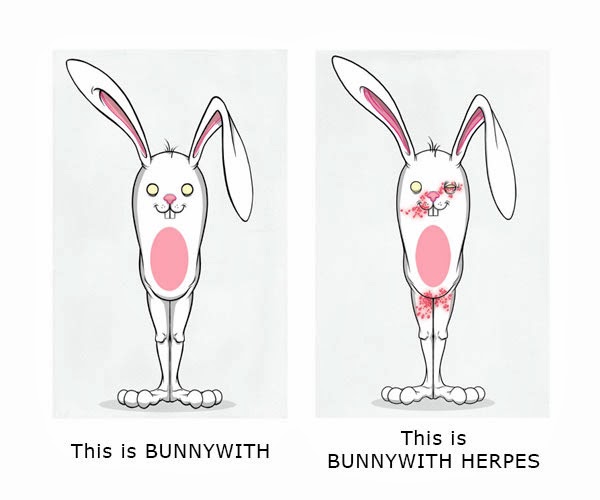 Stay tuned for more information regarding the 9 billion things that will be a part of the opening show.

Regurgitated by alexpardee at 12:59 AM

For the last 6 months, the imaginative and dynamic duo of Ransom & Mitchell have been physically transforming the ZeroFriends artists into inhabitants of a surreal, whimsical and morose castle filled with hidden chambers, secret gardens, beasts,  a magical graveyard and even....a dentist office.
Though they call themselves "die Familie" (German for " the family"), are they REALLY a family? Or something....larger?
Strung together through a series of narratives, props, and gorgeously shot portraits and prints of each artistic character, Ransom & Mitchell's "die Familie" will be moving from their 19th Century acropolis into the ZEROFRIENDS OAKLAND Gallery just in time for the upcoming  Halloween Season.

Check out some exclusive preview images below.
And check out some behind the scenes photos over on our ZF Facebook page.

Limited edition fine-art prints of each portrait will be available for purchase at the opening reception as well as online at zerofriends.com. 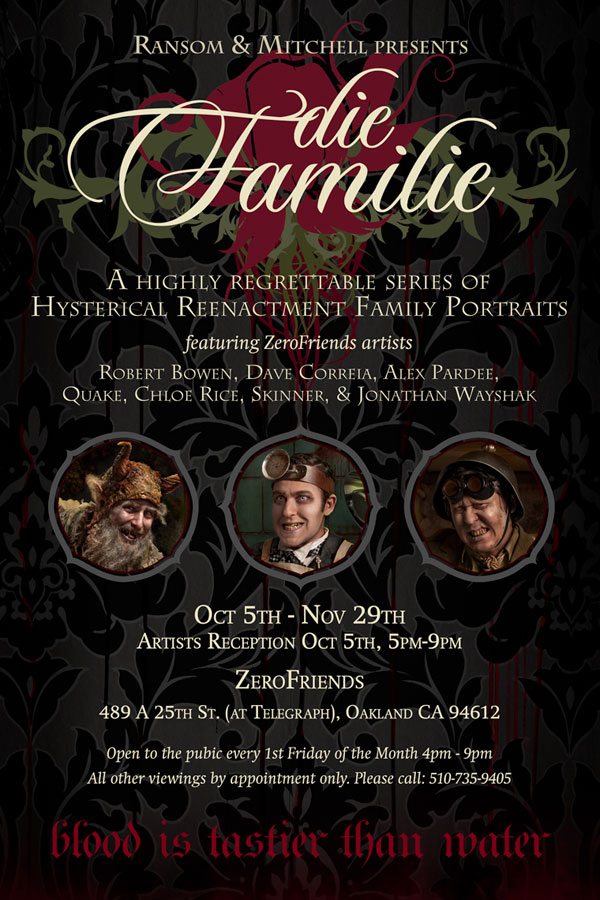 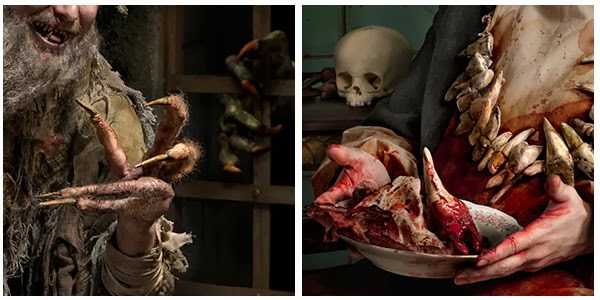 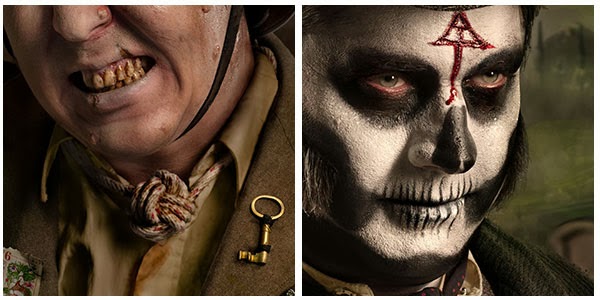 Regurgitated by alexpardee at 12:20 AM

You like movies??? Good. Then you are way ahead of the people that don't. Which means you most likely know of "Shaun of the Dead", one of the most clever and creative movies in the last decade. Which also means you know "Shaun of the Dead"s director, madman Edgar Wright? OK great, you're on a roll!
Well, being as how Edgar Wright is one of my favorite directors (in a "Trap-Jaw-Is-One-Of-My-Favorite-He-Man-Character" kind of way), and Edgar, Simon Pegg & Nick Frost are my favorite trio, I was insanely excited when Edgar invited me to see an early screening of their latest film, "The World's End". And, on top of my excitement, he almost telepathically forced uncontrollable pee to leak out of me when he then hired me create an exclusive poster for him for the movie. All Hell broke loose inside of my giddy brain and I got to work. 100 hours, 2 human manatee assistants, an old Commodore 64 computer, and 8 red bulls later, this is what emerged: 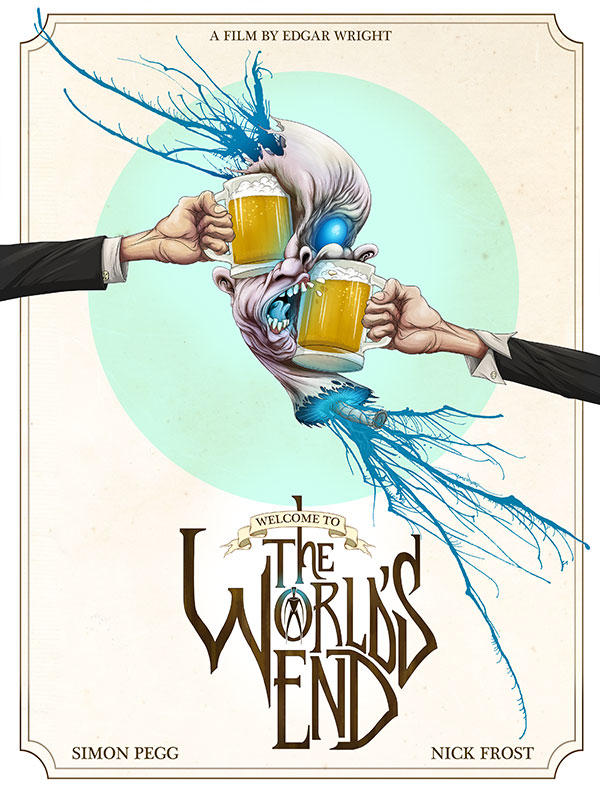 And now, in celebration of one of the best (blank) movies of the year, and possibly the greatest movie ever to feature a decapitation-by-urinal, I am proud to announce that this limited print will finally be available for sale starting THIS FRIDAY (which is tomorrow! Which is technically TONIGHT at midnight). So stay awake and don't sleep on this print release because if you do, the World might End.

Here are all of the details for the print:
"The World's End"
Designed by Alex Pardee, inspired by Edgar Wright
Limited Edition of 400
Signed & Numbered by Alex
18" x 24" Printed with archival inks on velvet cotton rag paper.
$60.00
Goes on sale Friday, Sept 20 at 12:01AM Eastern Time (9:01 pm tonight Pacific Time)
Exclusively on ZEROFRIENDS.COM 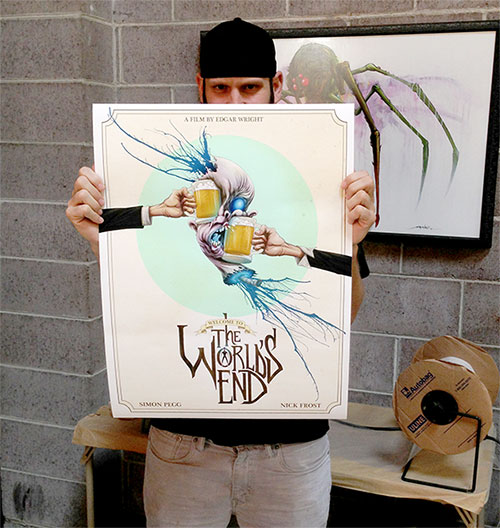 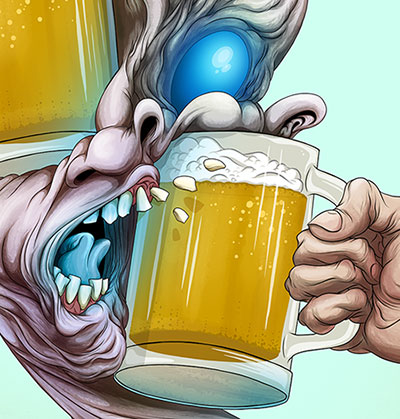 Regurgitated by alexpardee at 1:00 AM

Friday The Shirt-teenth is almost here!

There are holidays we like, such as Groundhog Day, Easter, and President's Day, and then there are holidays that we LOVE, like FRIDAY the 13th! Friday the 13th's are cool because they are the only holidays that come around more than once a year, AND they sneak up on you and try to kill you.
But it's hard to find a party store that sells Friday the 13th decorations, so we rarely celebrate the holiday any way aside from watching all of the films.
So guess what? We made our own party favors to celebrate, and we want you to get your hands on them so that you can celebrate too, THIS FRIDAY, which we now deem FRIDAY THE SHIRT-TEENTH!

For Zerofriends' first glorious "Friday The Shirt-teenth" we are releasing this horrific new 10-color discharge-screenprinted t-shirt on Thursday night at 9PM Pacific.

"FRIDAY THE SHIRT-TEENTH"
10 Color Screenprint on Black American Apparel shirt
Designed by Dave (the Fourteenth) Correia
Sizes XS-XXL.
$25.00 (plus FREE print will automatically be added to your shipped order if purchased by Monday Sept 16th).

And for the first 3 days its on sale, every shirt will come with this FREE print of a little vulnerable innocent version of our favorite killer!
This 5x7 print is part of Alex Pardee's "Doppelgangers" series and has never been available before now.

Available Thursday night at 9PM Pacific only at ZEROFRIENDS


Regurgitated by alexpardee at 12:48 PM

Friday The Shirt-teenth is coming!

THIS FRIDAY ONLY ON ZEROFRIENDS.COM

Thank you, @PBustamante for putting this bloody video together.

Regurgitated by alexpardee at 7:53 PM 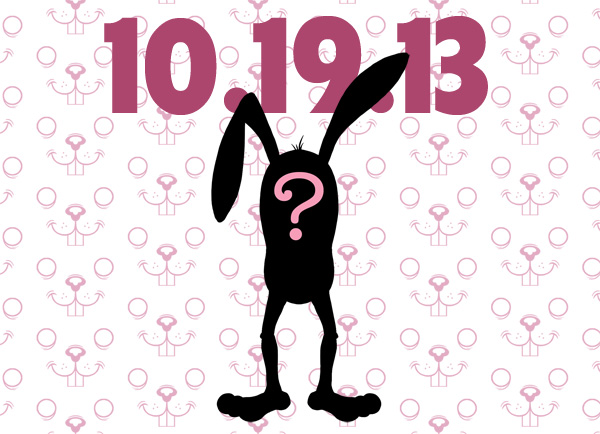 It was a pipe dream a few months ago, but it's more official now than the 50 Shades of Grey casting. "BUNNYWITH" IS COMING TO LOS ANGELES to invade a little corner of Melrose & La Brea within the magical walls of Gallery 1988 (East) on October 19th! Bunnywith has gone through more changes than Lady Gaga over the course of 15 years since I created him, and what I'll be showing, selling and hopefully making you laugh until you choke on your gum will be the latest and greatest collection of Bunnywiths ever.

I'll trickle out some Bunnywith-related things periodically over the next few weeks but the best way to experience Bunnywith is in person, because over 100 of them at once seems to be way sillier than one of them at once.

Follow me @alexpardee on the social things for updates. Or HERE on Tumblr.

And in case you don't know what Bunnywith is, and really, why should you? It's easy. It goes like this: 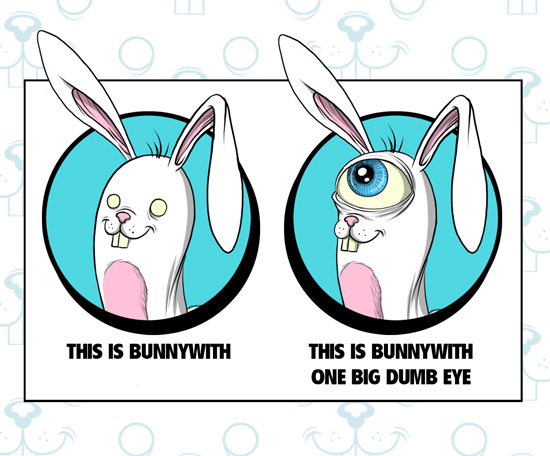 It really is that kindergarten. And it doesn't get any more complicated.

Regurgitated by alexpardee at 2:24 PM