CUTE PALPATINE up for CUTE AUCTION;)

My CUTEST PALPATINE IN THE EMPIRE, which was on display at the Lucasfilm booth at Comic Con, is now up for auction for charity thanks to Lucasfilm, CharityFolks, Hasbro, and Bonnie Burton!
Along with mine, there are some other amazing and hilarious custom Muggs up for charity so check out the AUCTION HERE, which ends AUGUST 14th!

Direct link to bid on my Palpatine!
http://www.charityfolks.com/cfauctions/auction_bid.asp?auctionid=16828&catname=Collectibles+%26+Memorabilia&mcid=8536 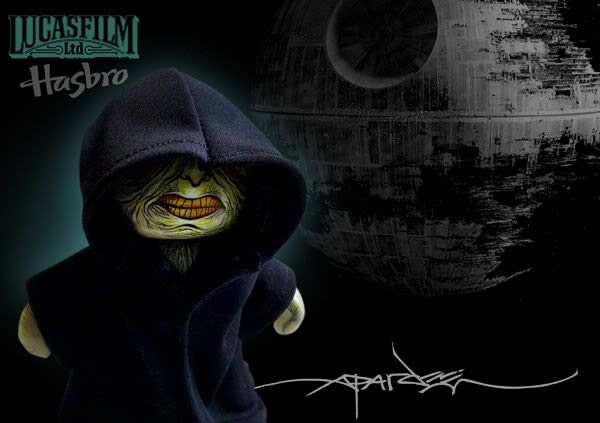 HAPPY BIDDING.
IN FACT, HERE IS WHAT CUTE OL' PALPATINE SAID ABOUT AUCTIONS:
"I usually let Lord Vader do my bidding."

Don't be like the Emperor, do your own bidding!:)

Regurgitated by alexpardee at 4:08 PM

Hola, yolas.
Just a quick note, i'm hustlin as hard as I can to make sure my Denver art show is as SEXY as can be, and the Zerofriends dudes are trying to recover from Comic con.
But i just wanted to give you a heads up that the new products that we debuted at comic con are now available for purchase online at the ZEROFRIENDS STORE.

Click on any of the photos to purchase or view at the store:)
Your chest and your chest's friends will thank you. 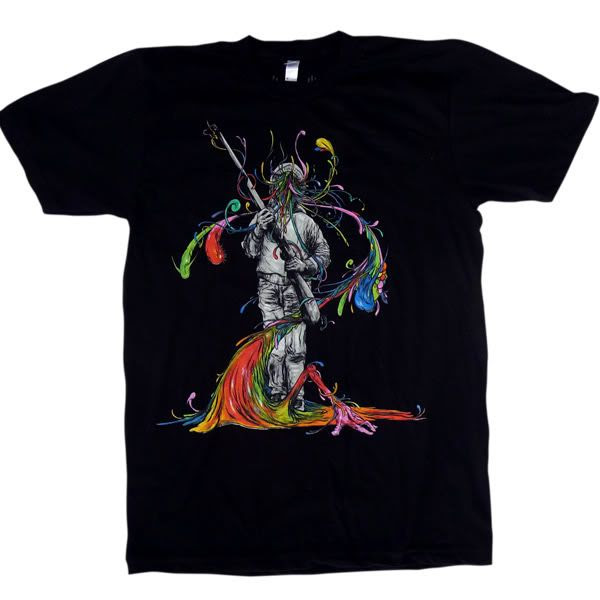 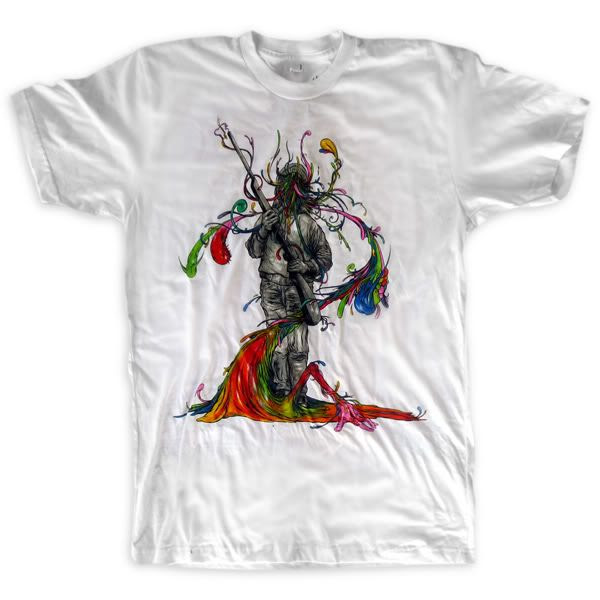 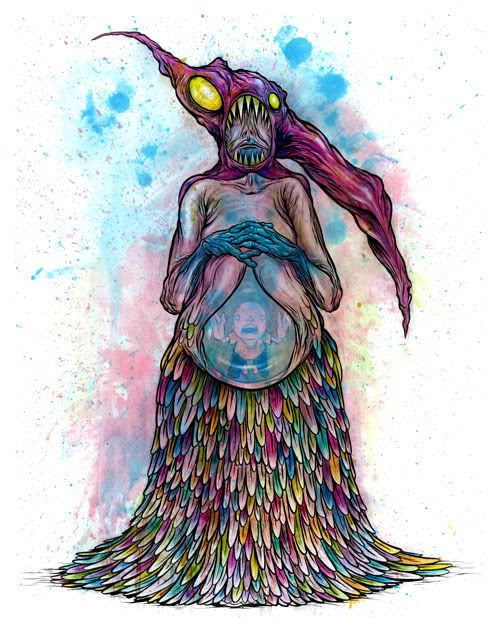 
Regurgitated by alexpardee at 8:03 PM

So, as promised, here is a full look at the art that I created for director Zack Snyder's upcoming movie "Sucker Punch".
This is the first image that has been released anywhere regarding the film, which I am completely honored to be a part of. Below is a brief synopsis of the film, which comes out in 2011. Pass it around, its gonna be ill!

Set in the 1950s, SuckerPunch follows Babydoll (Emily Browning) who is confined to a mental institution by her stepfather, who intends to have her lobotomized in five days. While there, she imagines an alternative reality to hide her from the pain, and in that world, she begins planning her escape, needing to steal five objects to help get her out before she is deflowered by a vile man. 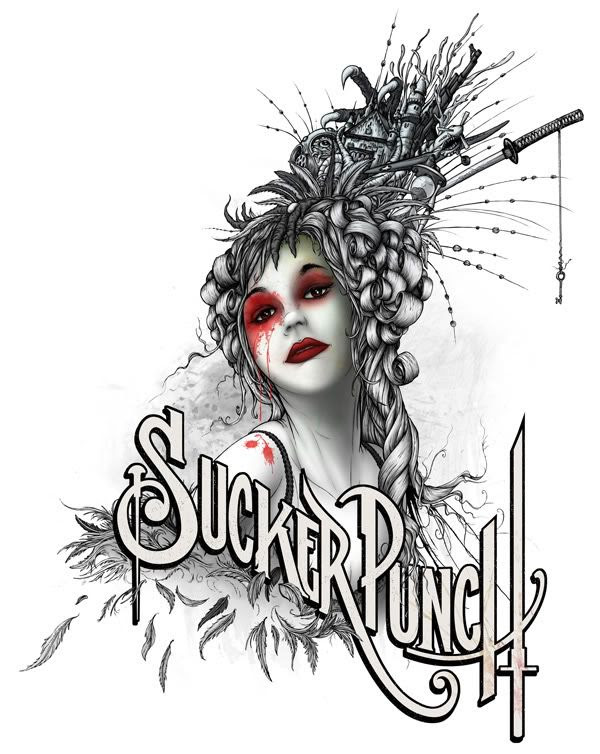 As far as the shirts that they gave away at the Watchmen panel at Comic Con, I have not heard if these are going to be sold anywhere officially, nor do i own the image so Zerofriends will NOT be producing any of this stuff, but judging from the amount of merch thats floating around there from Zack's other movies, I'm pretty sure you will see some of this stuff on shelves sometime;)

Regurgitated by alexpardee at 2:59 PM

Last night, at 1am at the San Diego comic con, one of my favorite directors, Zack Snyder (Dawn Of the Dead, 300, Watchmen) showed the very first public piece of art for his upcoming movie, Sucker Punch. and guess what!? I MADE IT! YESSSSSSS!!!! Like a twinkie, I will fill you in more soon about it, but for now, check out the announcement thingy:

Wanna see the brand new CHADAM trailer that debuted on the Warner Bros jumbotron screen yesterday at the San Diego Comic con??? Well then click that little triangle down there.
If you don't know, CHADAM is an animated series I created for Warner Bros and have been working feverishly on for almost 2 years now. Still no solid release date, but we are getting there;)

Anyway, check it out!


And here is a little behind the scenes, high-fiving action from the weekend that we recorded the voice-acting, which still ranks up there in one of the coolest 2-day-period of my life.

Regurgitated by alexpardee at 11:33 AM

Its OFFICIAL. on August 7 I have a NEW SOLO show in DENVER @ Andenken Gallery! And things just got WAY SEXIER! 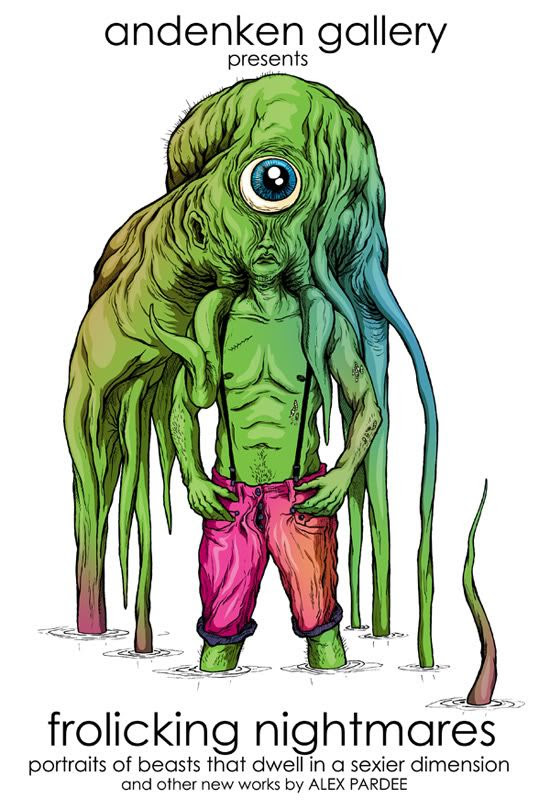 Regurgitated by alexpardee at 11:18 AM

COMIC CON IS HERE! AND SHIT'S GOING DOWN!!

COMIC CON 2009 IS HERE!!!!!!
John Carpenter's "In The Mouth Of Madness" is an awesome film, with an ill title. I used to say I love that title so much that I wish I could apply it to my life. However, now that these last few weeks have been so hectic and maddening, and i CAN say that I live "In The Mouth Of Madness", i all of a sudden regret that thought. But screw it, and as Twitter-master Diddy says, "LET'S GO PEOPLE!"

First, the GREAT NEWS:
For the last couple of weeks, I have been working on part of a very surreal and amazing project that does not involve me directly, but having a small part in this epic project has been something that I wish i lived far away for, so I could write home about it. It has been rad, and I will be able to tell you more after Comic Con, as I believe it is getting announced at the Con. If you want a little secret heads up, I suggest you fight your way into the LIVE WATCHMEN DIRECTORS CUT WITH ZACK SNYDER, DAVE GIBBONS, & JACKIE EARL HALEY doing live commentary while they screen the movie! Its on Saturday, July 25th, in ROOM 6BCF @8:30pm. (no, I didn't do anything Watchmen-related, though that would be equally amazing!) 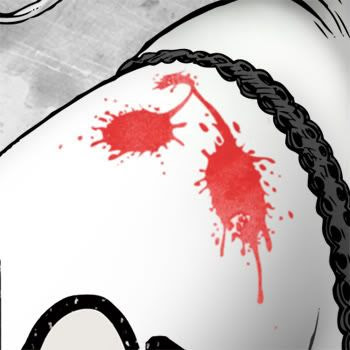 Now, for some more GREAT news!
As of 3 days ago, Zerofriends COULD NOT get a booth at Comic Con, though we tried and tried for months. I have had a booth there every year for 10 years but that place is just too popular and too in demand for everyone to get a booth. However, as of 2 days ago, Justin from Comic Con International, was able to GET US A BOOTH AT THE LAST MINUTE!!!
That's right, ZEROFRIENDS will have a HUGE BOOTH at Comic con. Come see us at BOOTH #5302! Its close to the entrance. here is a partial map of the side of comic con where we are at (if you have ever been there, you know that this is like 1/18th of the exhibitor hall!) 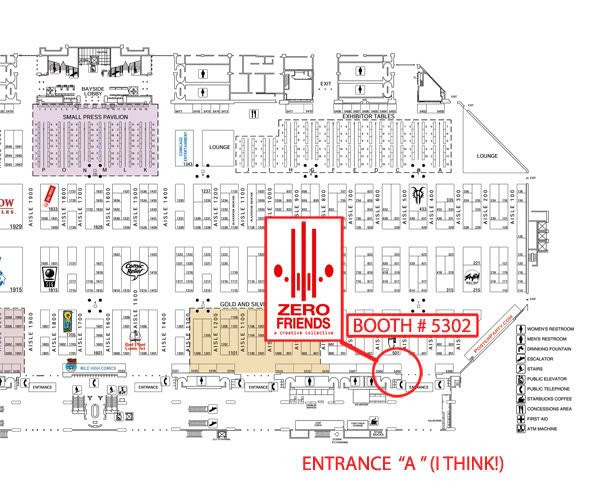 And, though it was such short notice and we don't have anything that will be totally exclusive to the convention, we DO have some new limited products that we were waiting until next month to release, but we figured this would be a better time! So make sure you go by BOOTH #5302 to check out a ton of products that we are bringing down there.

Detail of the print: 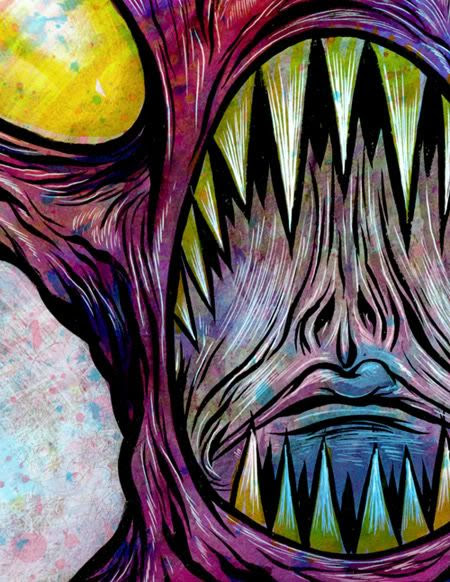 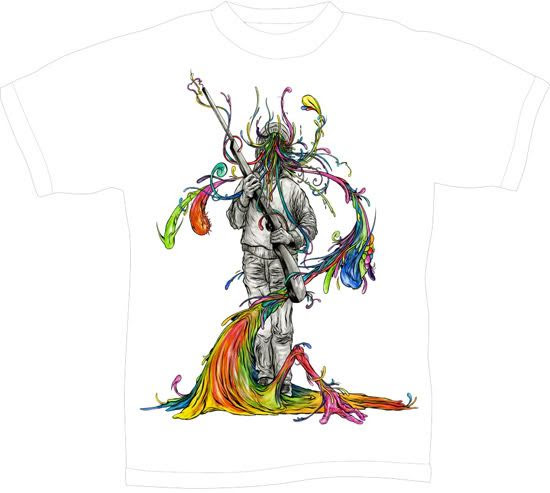 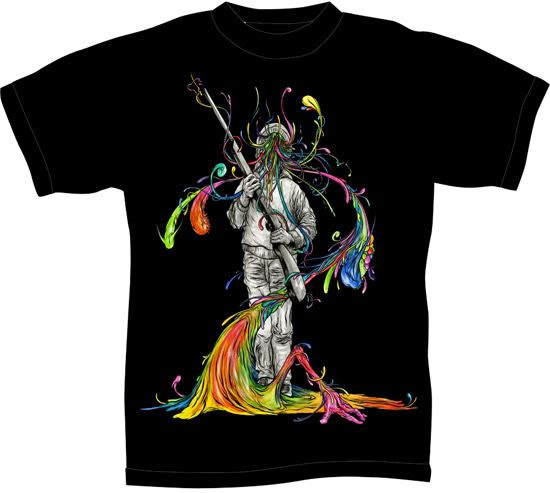 "CREATURE" Skate Deck.
We finally have a few of these in stock. They came out briefly and were super limited and sold out quickly through Creature, but we got our hands on a few for the convention. And it comes with a mini Baseball Beater Bat too! For only $50! Deck is limited to 350 of them! 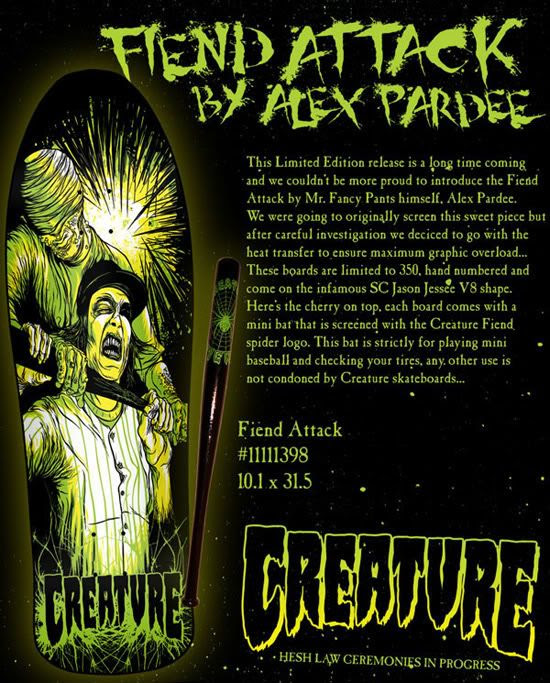 Also, even if you don't have any $$ to come pick up anything from us, at least stop by to check out a BRAND NEW "CHADAM" TRAILER that will be debuting at both the WarnerBros booth (on the JumboTron) and at the Zerofriends booth! It's looking cooler and cooler, and will be coming out soon! 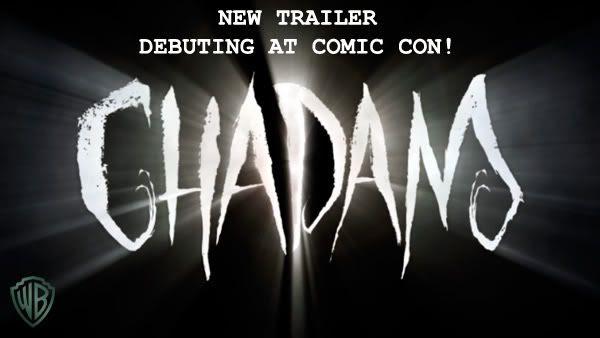 Additionally, I will have a few other things floating around Comic Con:
I think i have a couple new shirts (and my WALRUS RIDER TOY) available at the UPPER PLAYGROUND BOOTH (#4031).
I did this painting of my favorite bumbling VILLAINOUS BONEHEAD for MATTEL's booth (#3029) to advertise a really cool project that they have going on (which I don't think i can tell you about but I'm sure it will be known at their booth): I had to do this piece rather quickly but I was stoked that they asked me to do it so I jumped on it. Hope ya like;) 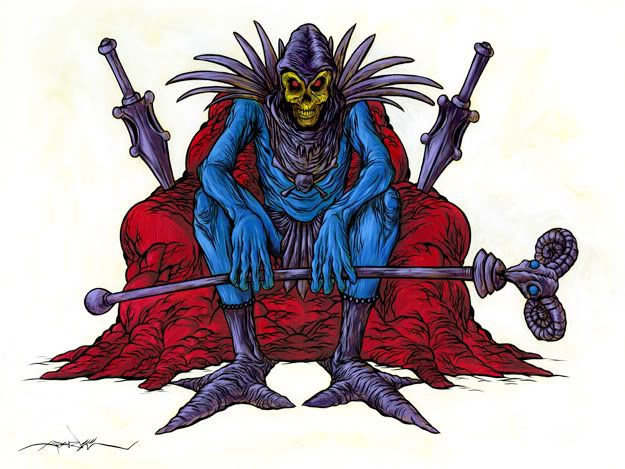 And a detail of the loverboy's face: 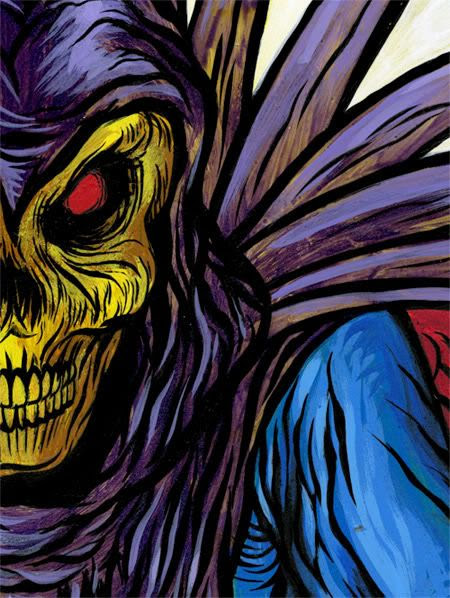 And lastly, I am taking part in a charity auction organized by Lucasfilm & Hasbro to benefit the Make-A-Wish-Foundation. Over 50 of us artists customized MIGHTY MUGGS toys to fit into the Star Wars universe and they will be auctioned off and displayed at LUCASFILM's Booth (#2913). Naturally, because of my lust for Old Men with Lightning Powers, I chose ol' Emperor Palpatine as my drug of choice. Here is the little cute evil man:

Now, on to the BAD news:
With me being involved in so many cool things at Comic Con this year, it breaks my heart to tell you that, though Zerofriends will have a booth there, I WILL NOT BE THERE AT ALL this year:( My schedule is too too hectic in the next few weeks and I tried everything, but to no avail. It's the first time in 10 years that I will not be at the con, and i really do have a broken heart. But i will be there in spirit and I will Twitter as though i am there, so look out for that.
Regardless, I love you and hope to see you via satellite at Comic Con from my studio (soon to be hospital bed at the rate i'm going).

Regurgitated by alexpardee at 4:21 PM

THE TIME IS HERE!
No, not fucking Morris Day and his awkward mustache and scarf-laden dance-steps, i mean CAGE IS HERE, DAMNIT!
It's midnight everywhere in the world right now (don't know how that's really possible, but Cage makes weird things happen) and that means that the awesomely-anticipated new CAGE album, "DEPART FROM ME" is now released in stores everywhere and in the digital realm via itunes and amazon and all that shiz.

I highly suggest you run out to the stores in the morning to pick up a physical copy of it. Why? well, for one, because supporting independent music in a time where every musician is losing money is a necessary thing for us to all do.
and two, because we tried really hard to make a cool art package for you to rip all up and hang up in your locker and stuff, and the low-res stuff you can steal online doesnt nearly do it justice. I promise.

Anyway, you can listen to the whole album on Cage's myspace page, here:
http://www.myspace.com/cagekennylz
and if you like it, pick up a copy. he deserves it. the dude is FRESH! and here is all of the artwork that you will get if you grab a copy of the album. and the cool thing is, only Cage and myself really know what all these drawings mean. But regardless, hope you enjoy both the album and the art.
Long live Chris Palko. Less than 3. Thats a heart, yo. 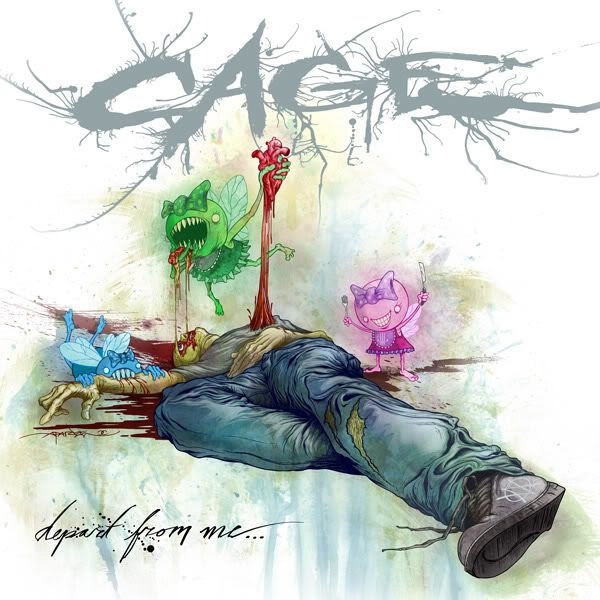 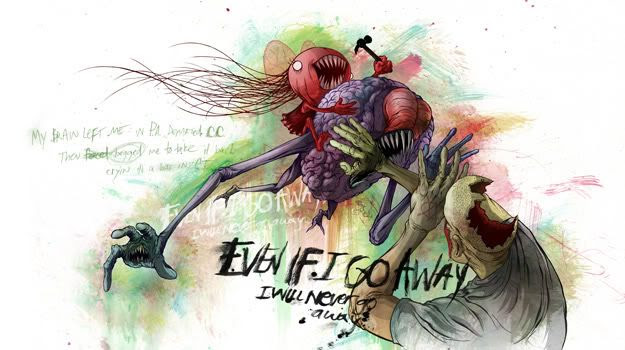 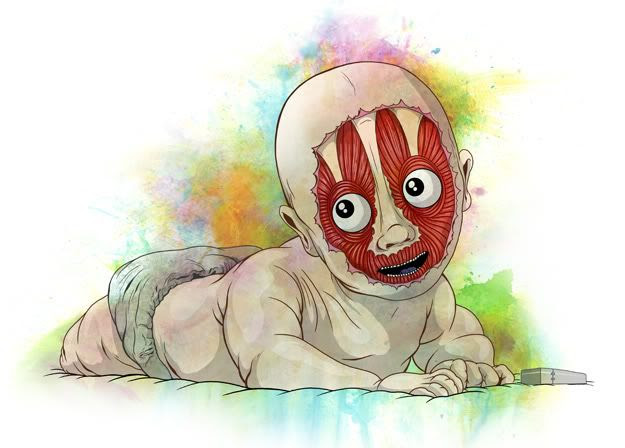 Regurgitated by alexpardee at 11:41 PM

In a bout of last-minute ninja-like secret-ness, Zerofriends is appearing NOW at the Los Angeles ANIME-EXPO.


Unfortunately, i have to miss it because I am moving. And my "moving" also consists of duct-taping the shit out of everything so the critters don't eat my earwax (see below). But that shouldn't stop you from going and checking out all the new stuff we have for sale there. And as a hippy-like bonus, I'm sure Shotgun Sean will give you a tremendous hug if you are dressed up in costume.

For more info on the con, go to
http://www.anime-expo.org/ 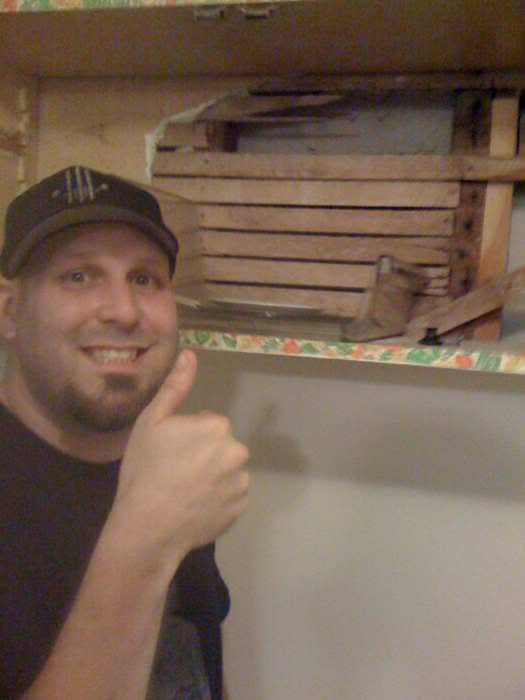 THE CRITTER DOORWAY TO MY DIMENSION... 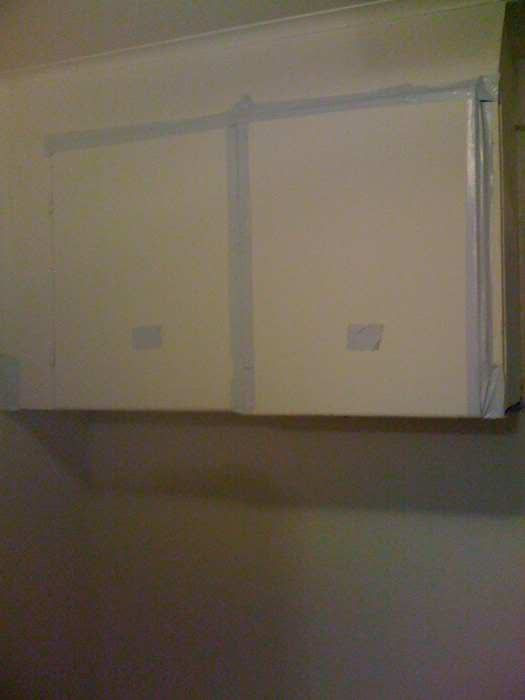 
Regurgitated by alexpardee at 10:48 AM