Vivisect pieces up for sale

Just a quick note, The Vivisect Playset show that I was just a part of at Gallery 1988 was a huge success. I sold one of my pieces at the opening, and the other 2 just went up for sale today online at Gallery 1988!

You can also view the entire show here and check out some of the other amazing pieces from the show. And be sure not to miss Charlie Immer's pieces, they are incredible.

Here are the pieces from me that are available: 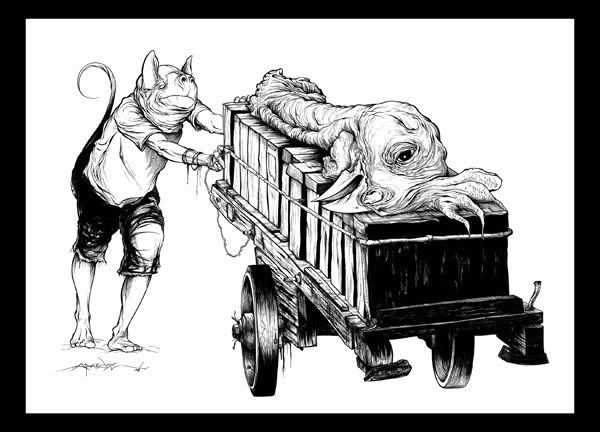 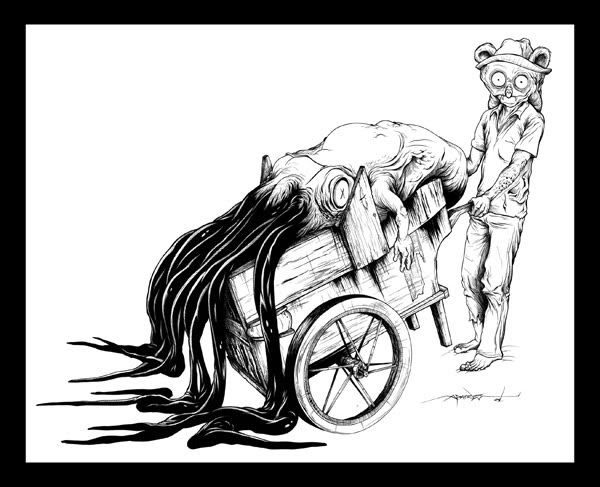 Also, there is still time to shower your friends and loved ones with shirts, prints, and books that I designed that they can't get anywhere else but online at ZEROFRIENDS

Thank you all, and Happy early Holidays.
Regurgitated by alexpardee at 11:43 AM

A New Beginning For Bunnywith...

Some of you might not have been introduced to "Bunnywith" yet, so allow me to introduce him. 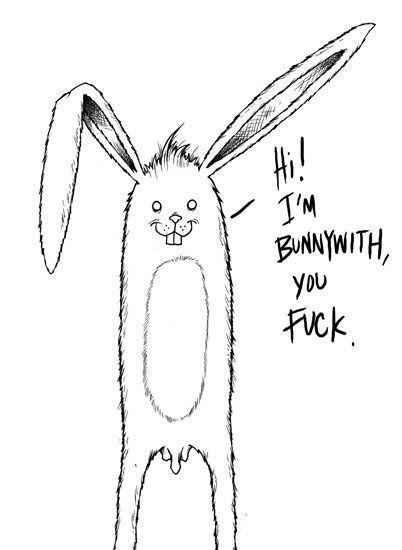 "Bunnywith" has been my favorite creation for years, and it will probably continue to be my favorite, for the sheer simplicity and freedom it has given me. "Bunnywith", and his adorable smile, allows me to be the asshole i wish I was 98% of my life. Someday I will tell you how it all started amongst the terror of a Jamaican math teacher and a nutcracker.

Over the years, Bunnywith has taken many forms. Comics,plush toys, and even trendy collectible vinyl toys.

And now, I would like to announce Bunnywith's brand new form, an almost-DAILY WEB COMIC!!!

Now you can get a daily dose of "Bunnywith" courtesy of Snafu-Comics, one of the most popular web comic sites on the internet (check that shit on Alexa, it's as legit as MC Hammer USED to be.) The comic has been live for a few weeks now, and is already causing a little uproar thanks to a couple of my favorite Bunnywiths, like the ones below. So, go check out the comic, cycle through all of the previous Bunnywith comics, bookmark the page and check out a new comic almost every day, and let SNAFU DAVE know how much you love all the cute references to Kurt Cobains death, abortion, decapitations, blow jobs, and bunnies. And while you are there, check out the other comics that Snafu has to offer, and if you are as nerdy as me, you will dig them.


AND MAKE SURE TO CLICK HERE TO GET ALL OF YOUR "BUNNYWITH" BOOKS AND TOYS ONLY ON AT ZEROFRIENDS.COM. 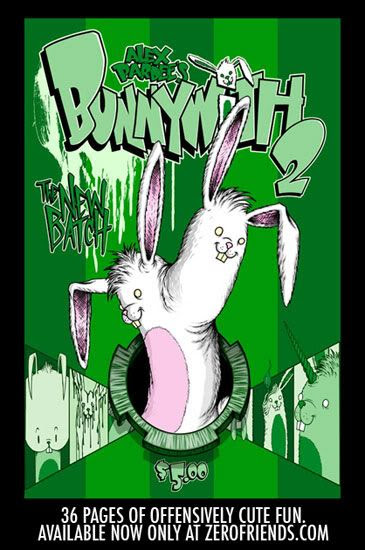 here are a couple examples of the Web Comic Relaunch of BUNNYWITH!
click any of the pics to go to SNAFU. 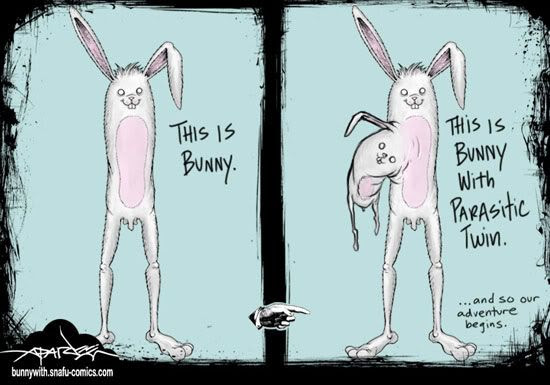 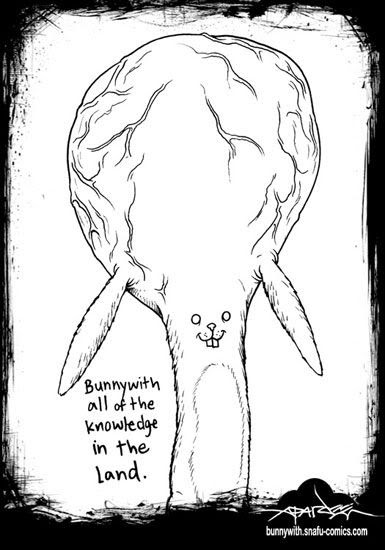 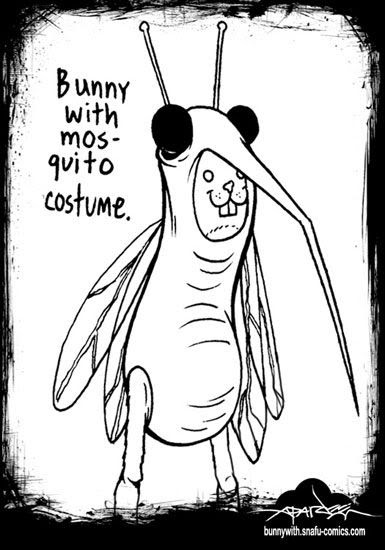 and maybe one of my favorites.... 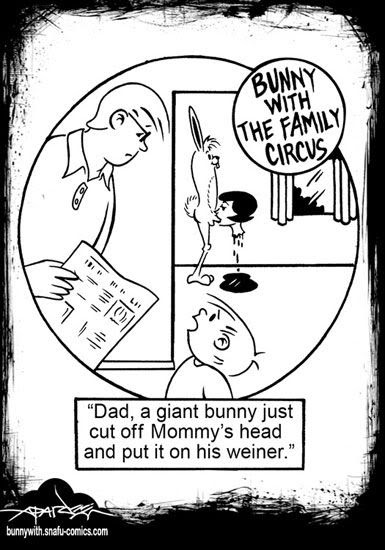 Regurgitated by alexpardee at 2:59 PM

Each year, thousands of children turn up missing. Some are found. But most, unfortunately, are not. Many of the children are victims of abduction, some are runaways, and a large handful of them....have been EATEN by monsters.

However, the digestive system of many monsters is abnormally slow, and a large portion of these children that have been eaten are still ALIVE, patiently waiting to be saved.

Over the last year, from various parts of the country, i have gathered a selection of written S.O.S. letters from some of these children who are slowly being digested by the monsters that devoured them.

My new solo art exhibition, titled "Letters From Digested Children" will showcase those S.O.S letters, as well as all new artwork, installations, and portraits of some of the more popular child-eating monsters in honor of the children who have been wrongfully eaten, and slowly digested.

Here is the info for the show: 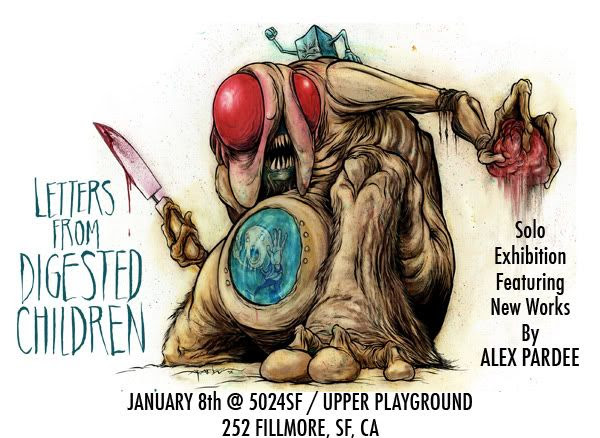 Periodically, I get sent some links to some art that is either a recreation of something I have done, or inspired by some various pieces, such as THIS ONE: 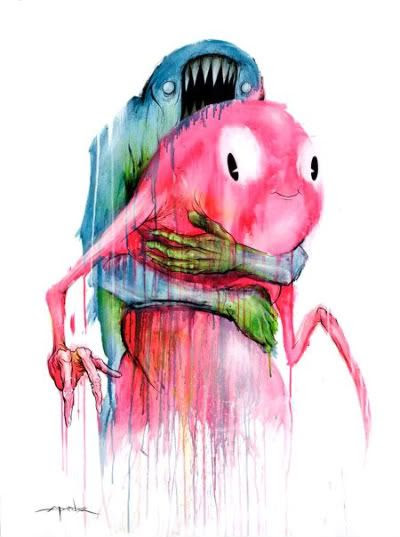 The original piece done by me. 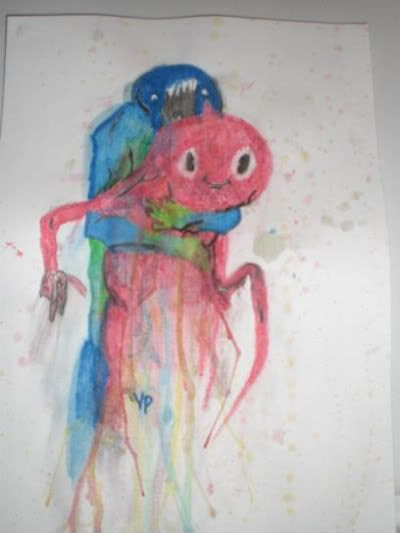 And the recreation, with the following description underneath it:
"i am SO PROUD of this.
its a recreation of the original by the amazingly skilled Alex Pardee."

It's an awesome feeling that someone would spend time and energy drawing one of my pieces because I grew up redrawing other artists' pieces whether it was comic books, album covers, etc. I think that's an amazing way to learn techniques and problem solving and eventually flip it into your own.

With that being said, keep it up!

That is, unless you are the person who did this one: 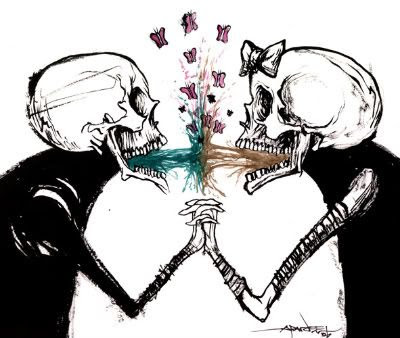 The original, done by me. 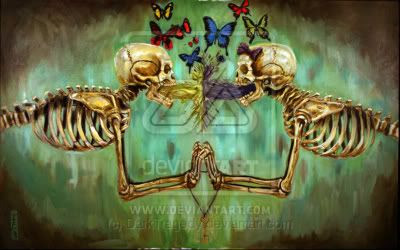 Now, that bottom piece is an amazing painting. But what was peculiar about it, was that the following description was underneath it:

"i dont really know what to say about this piece it was just a weird dream with a bunch of nonsense and color...
ps: for all those who think this is a RIP OFF OF ALEX PARDEE,
Fuck off!"

Hmmmm, that's an AMAZING coincidence. A guy skeleton, a girl skeleton (as You can tell by the bow), profile view, holding ONE hand, staring at each other, vomiting in each others faces, and the vomit turns into butterflies. And you are SELLING PRINTS OF IT???? Ok, I'll buy it. Good work, sir.

So yah, in short, redraw my shit, it makes me smile and feel really awesome. and i dont even really care if you dont mention me. but if you get called out on it, and you DENY it, and then try to MAKE MONEY off of that shit, I will re-open my mummy-filled sarcophagus and force that wrapped up gimp to curse you to infinite diarrhea and vengeful blood.
The end.
Regurgitated by alexpardee at 11:51 AM

The Hamburglar's MOM loves us...

Hello there,
We at ZEROFRIENDS pride ourselves in shipping out your orders faster than the greeters at Wal-Mart can get trampled, and even FASTER than Plaxico Burress can shoot his dick off and get, ironically, "fired" for the rest of the season (insert smiley face).

So why go to amazon or Target or Costco to get "practical" things for the holidays when you can get apparel, pretty pictures, and books that NONE of those places will have!??

If you want to make your loved ones happy this season, make sure you give them something that matters, like AWFUL HOMESICK (my new art book), A Sharkasus shirt, or even for the elderly folk, a Bunnywith plush!

I mean, seriously, The Hamburglar gave his MOM the Awful Homesick Book, and look how fucking HAPPY SHE IS!!!!
And YES, i am aware of the misspelled "One's" but i dont care enough to redo it.

If you order today, you will get your order in time for the holidays (unless you are overseas, which HOPEFULLY will get there on time, but it's hard to say).

You can do it put your back in to it!

It's no secret that I am fascinated by monsters, folklore, mythology, etc.
I will only die happy if i die AFTER we discover the that the Cloverfield monster really HAS been sleeping in the ocean, or that the Chupacabra isn't just a bunch of goth mexicans that steal goat blood because Hot Topic doesn't sell it, or that the Chicago fires were, indeed, caused by an angry Dragon.
So yes, in short, though i have never been hunting, and i don't really believe in killing animals unless it's for food or if they are talking shit, I DO fantasize about slaying giant beasts and wheeling the head-trophy into my village to reap my rewards of 50 pounds of gold and the 4 finest whores the townspeople will no doubt throw on my dick.
So what better way to convey my fantasies than to draw them just in time for my good friend, Luke Chueh's group art show THE VIVISECT PLAYSET FIVE that I am a part of.
Here are the 3 pieces i did for the show, which opens this FRIDAY, Dec 5 at GALLERY 1988:SF. More info below. 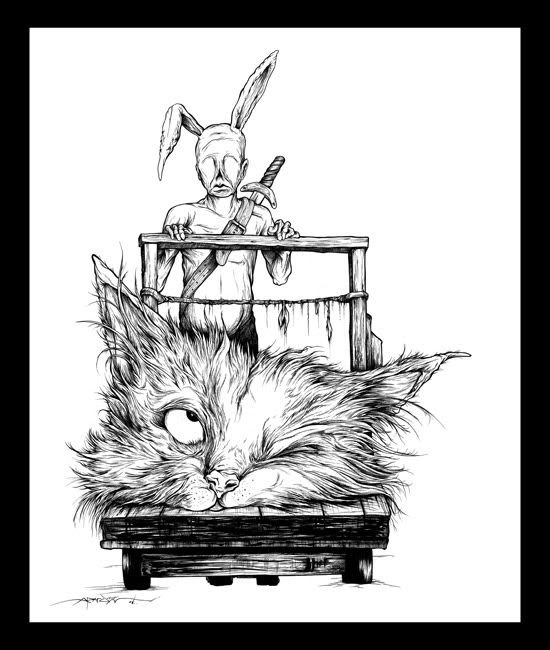 "The Hunt For The Giant Kitten Is Over" 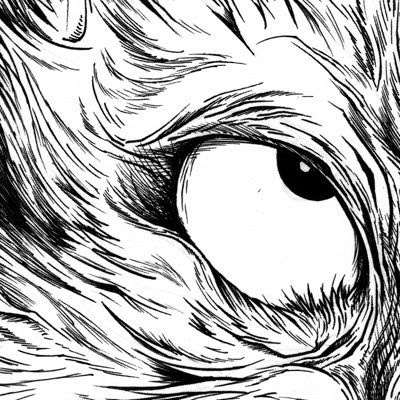 (Detail of the Giant Kitten)

"I Took Care Of The Great Chicken Problem" 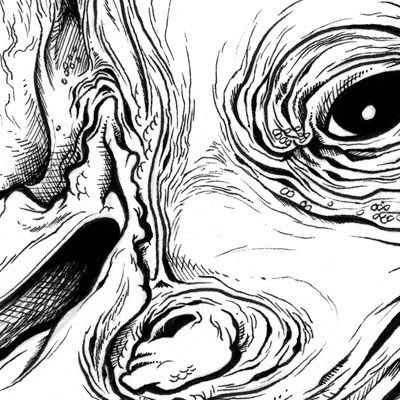 (Detail of the Great Chicken)

"Squid-Kid Is Dead, and I Have The Proof" 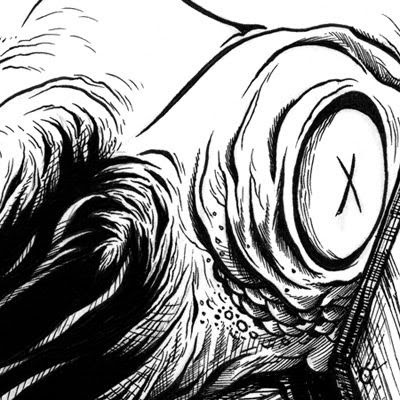 
Here is the official press release:

LUKE CHUEH & GALLERY 1988 SAN FRANCISCO PRESENT: "THE VIVISECT PLAYSET FIVE" For five years now, Luke Chueh and Gallery 1988 curated and hosted The Vivisect Playset, an art show that featured artists who regularly employed animal characters in their work to illustrate the human condition. The show has illuminated the talents of several artists, helped set the foundation and direction for Gallery 1988, and even conceived a series of toys, produced by StrangeCo.