"Night Of The Treeple" Mystery Revealed

So, I impatiently waited as long as I could to blurt this out, as I have been working on it for as long as Jamie Kennedy has sucked, but I noticed today that a few of these images got leaked online so I figured I would announce this properly so you hear it from my horse-mouth, or whatever that saying is.

In case you live in the sewers with the CHUDs and Clay Aiken's secrets, and you missed this video floating around on the information superhighway, take a second to witness this recently uncovered trailer to a lost gem of a movie from the late 70's, somehow staring "Future Me" since in the late 70's i was 2 years old. But don't pay attention to that. Just pay attention to all of the Awesome contained here:

Now that you know all about Ross going to the gym and Ted and his unfortunate transformation into a killer tree, here is the announcement that will allow everything to make a little more sense:

This is not a trailer for a movie. This is a commercial for MY NEW CINEMATIC CLOTHING LINE BEING RELEASED BY HURLEY CALLED "NIGHT OF THE TREEPLE"!!! 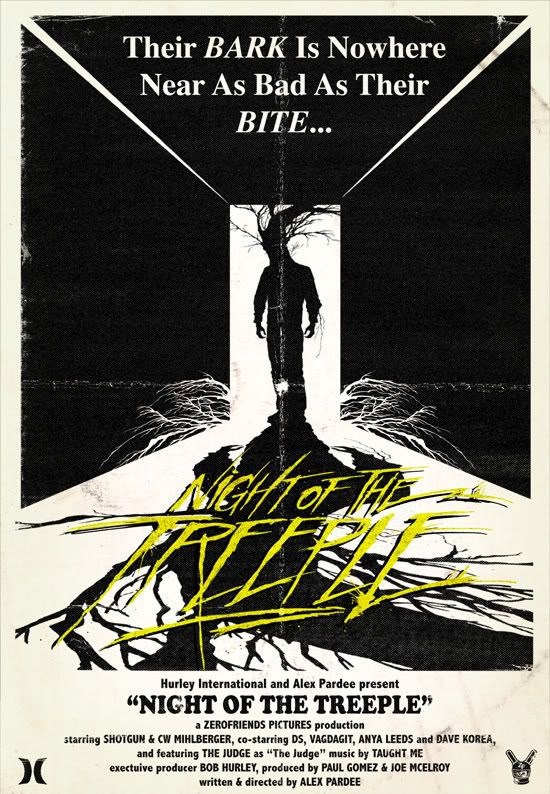 So yah, within the next week or so you should start looking for the TREEPLE line to start branching out into a bunch of stores, like Buckle, Macy's, Zumiez, etc.

These images (including the old school poster up above) will be available on a variety of t-shirts and hoodies. Check em: 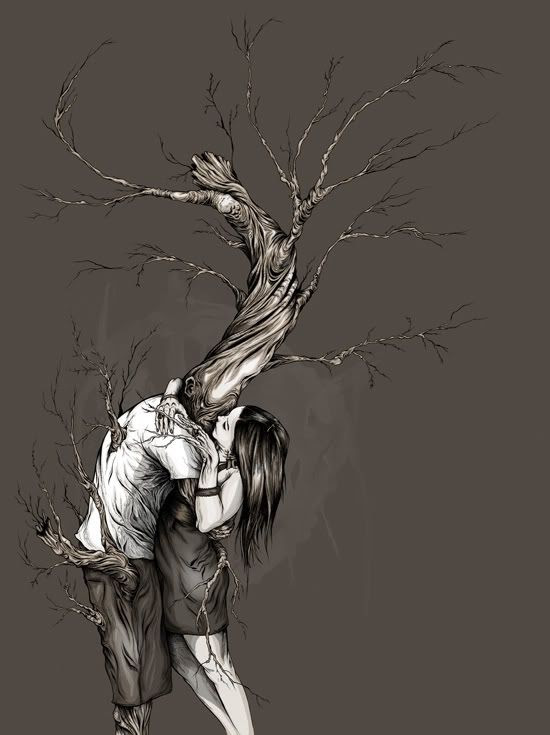 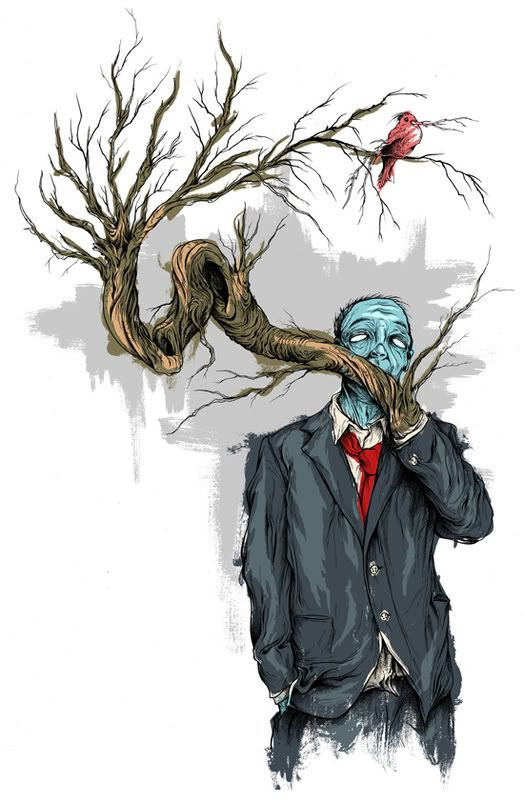 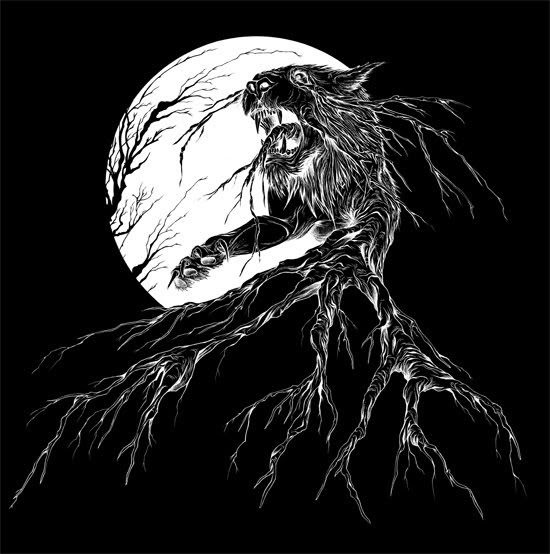 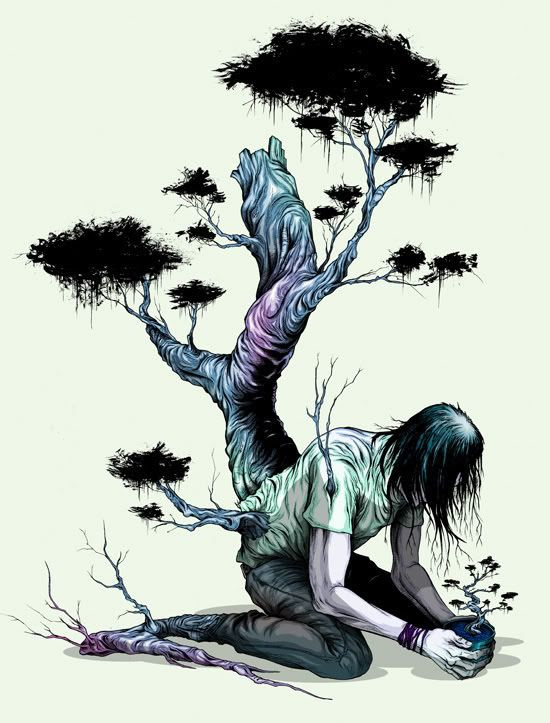 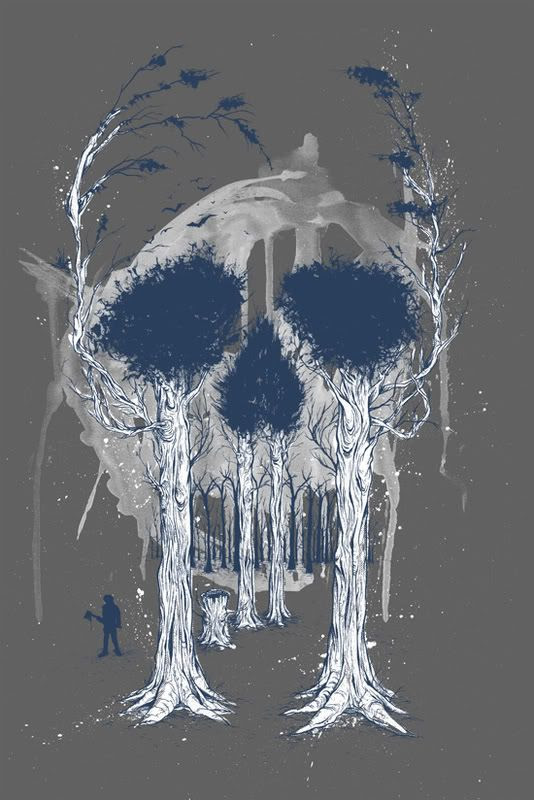 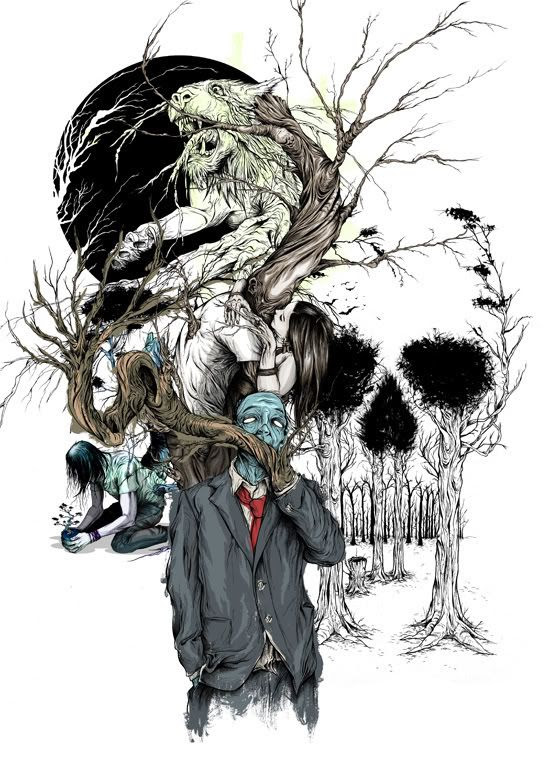 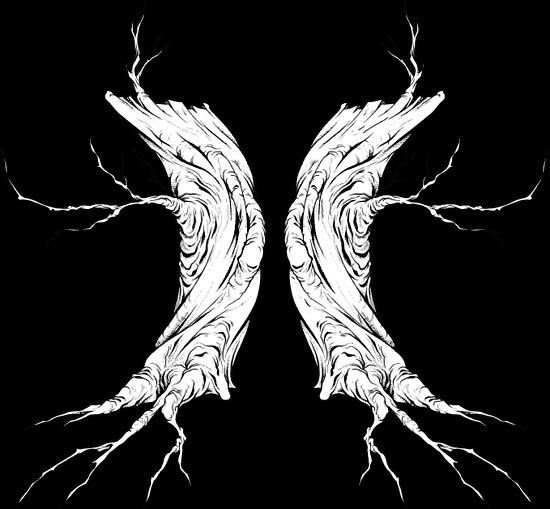 The idea behind the whole project was basically that I wanted to create a line of clothing that was both an homage to a genre of film that I love 70's and 80's horror / exploitation films), as well as a catalyst to introduce a new way of presenting apparel as a way of telling a story visually. In a way, the "Treeple" line is my own personal and original version of a 1970's exploitation horror film, as told through my art and Hurley's apparel.
I wanted to create "A Cinematic Apparel Line".

In an era where gorgeous models fought aliens in space (Barbarella), where a group of farmers buried people in the dirt and harvested their heads (Motel Hell), where the government was ALWAYS at fault for negligence, where alien plants took took over and replicated humans (Invasion of the Body Snatchers), deformed siamese twins became evil serial killers (Basket Case), and toxic waste was EVERYWHERE (Toxic Avenger, Empire of the ants, Food of the Gods, Robocop, etc), it was apparent that the reality of the story never mattered, it was simply fun and new to explore the "What if's?" of storytelling and filmmaking.
So I asked "What if toxic waste made trees attack humans and turn them into some kind of tree/zombie/slasher hybrid?! Like mother nature's revenge for neglect." 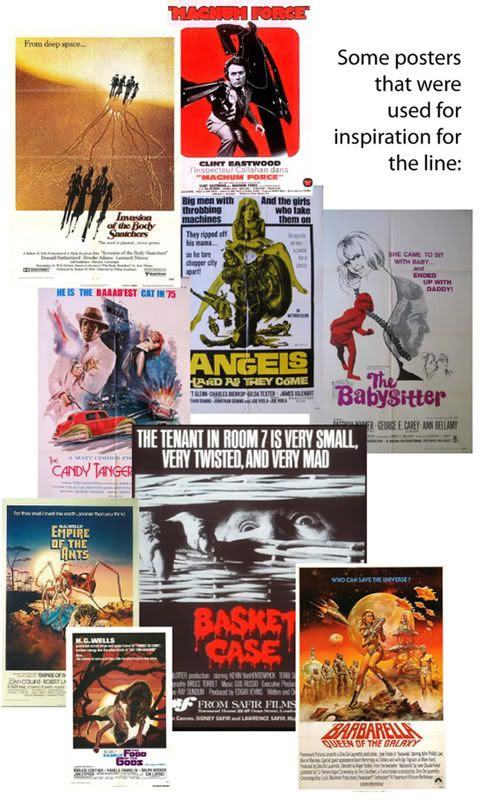 That's how Night of the Treeple was born.

This is a pretty monumental project for me for a number of reasons, none which include "because I love cinnamon rolls".

1. This is the first time that I have had been involved in every aspect of the finished product from start to finish, from the art, to the cut of the shirt, to the quality of the fabric, the stitching, the tags, the marketing, everything.
2. With Hurley being such a huge mainstream brand, when they approached me about doing a line for them, I wanted to make sure that I took a chance artistically and presentation-wise did something that was completely different than anything they have done in the past, and when I presented them the whole "Cinematic Approach" to the line, they completely trusted me and let me do what I wanted, which, when so much is at stake, is pretty amazing on their part.

The even let me screenprint this whole teaser story on the inside of every shirt: 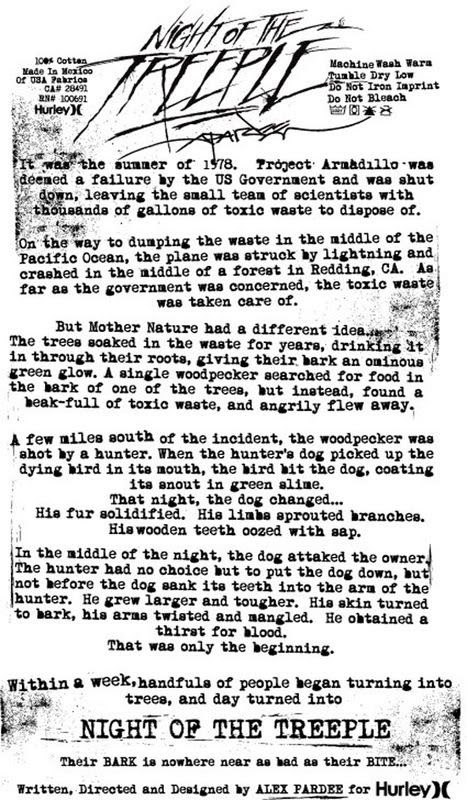 In addition to retail stores, it should be available online at HURLEY.COM on OCTOBER 1st!!!

Stay Beautiful.
Alex
Regurgitated by alexpardee at 1:56 AM